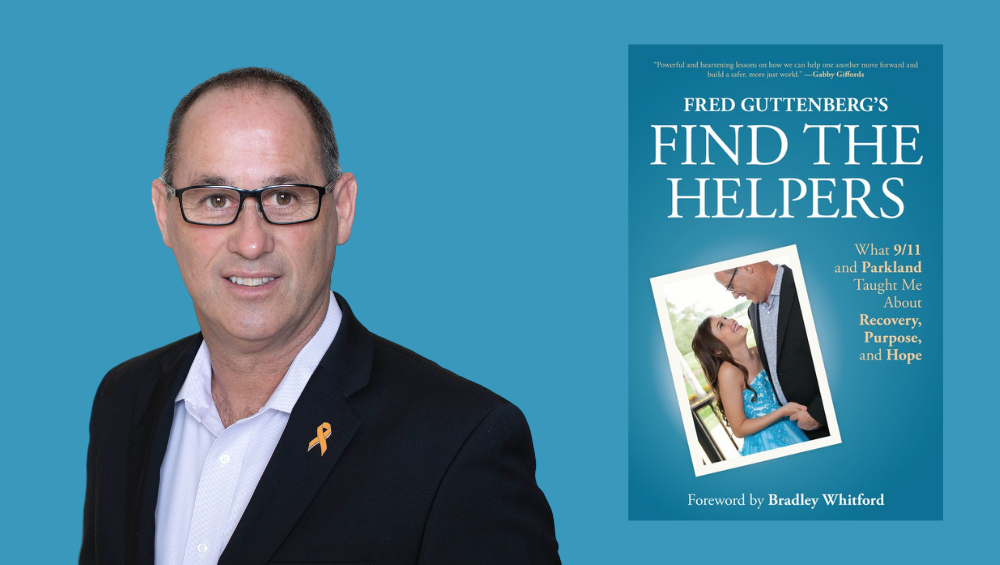 In-Person: An Evening with Fred Guttenberg | FIND THE HELPERS

with introduction by Pastor Laurie Hafner

Fred Guttenberg’s Find the Helpers: What 9/11 and Parkland Taught Me about Recovery, Purpose, and Hope 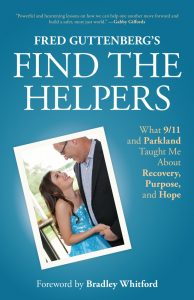 “Don’t tell me there’s no such thing as gun violence. It happened in Parkland.” ―Fred Guttenberg

Life changed forever on Valentine’s Day 2018 for Fred Guttenberg and his family. What should have been a day of love turned into a nightmare. Seventeen people died at Florida’s Marjory Stoneman Douglas High School. Fourteen year-old Jaime Guttenberg was the second to last victim.

That Jaime and so many of her fellow students were struck down in cold blood galvanized many to action, including Jaime’s father Fred now a gun safety activist dedicated to passing common sense gun safety legislation.

Fred was already struggling with deep personal loss. Four months earlier his brother Michael died of 9/11 induced pancreatic cancer. He had been exposed to too much dust and chemicals at Ground Zero. Michael battled heroically for nearly five years and then died at age fifty.

Find the Helpers has a special meaning to the Guttenberg’s. It was a beloved family wisdom learned from watching Mister Rogers’ Neighborhood. In the midst of tragedy, “always look for the helpers. There will always be helpers. Because if you look for the helpers, you’ll know there’s hope.” ―Fred Rogers, 1999

Healing from grief. Discover the story of Fred Guttenberg’s activist’s journey since Jaime’s death and how he has been able to get through the worst of times thanks to the kindness and compassion of others. Good things happen to good people at the hands of other good people─and the world is filled with them. They include everyone from amazing gun violence survivors Fred has met to former VP Joe Biden, who spent time talking to him about finding mission and purpose in learning to grieve.

If you enjoyed Eyes to the Wind, Haben, or The Beauty in Breaking. Then you’ll love Find the Helpers.

FRED GUTTENBERG began his public life after the murder of his beautiful 14 year old daughter Jaime. The day after the murder, Fred attended a public vigil in Parkland. While there, the Mayor asked him to speak. His words shook a nation.

Only four months prior to this, Fred’s brother Michael passed away in October 2017 from cancer related to his service in 9/11. He was one of the original first responders and was trapped in the WTC as it collapsed.

Amazingly, the room that they hid out in did not collapse and Michael and his team of physicians spent 16 days at ground zero taking care of others

Following his involvement in these two distinctly American Tragedies, Fred has traveled the country talking about both events but also talking about perspective, perseverance, and resilience. He discusses pivotal moments in our life and how we respond to those moments. Fred’s mission ultimately led him to write his new book Find The Helpers.

Fred Guttenberg’s professional life previously included over a decade of experience management with Johnson and Johnson, followed by almost 15 years as an entrepreneur, with 19 Dunkin Donuts, which he sold in November 2016.

The Rev. Dr. Laurinda M. Hafner’s passion for prophetic ministry, the social gospel and the arts has been the mark of her vibrant ministry. Called as Senior Pastor of Coral Gables Congregational UCC in 2006, Laurie came from Cleveland, Ohio where she served congregations for twenty-eight years, among them as senior pastor of Pilgrim Congregational United Church of Christ, for eighteen years.

Pastor Laurie, as she is known, is presently a board member of the Collective Empowerment Group of South Florida, an organization dedicated to building up Black communities and developing assets in Miami-Dade County; has served as chair and co-chair of the Miami Coalition for Christians and Jews Clergy Dialogue, the oldest interfaith dialogue in the country; is president of P.A.C.T. Laurie is a political science graduate of Elon University. She received her Master of Divinity Degree from Christian Theological Seminary and was awarded a Doctor of Ministry Degree from McCormick Theological Seminary in Chicago. She was privileged to study with Father Henri Nouwen when he was at Yale Divinity School.