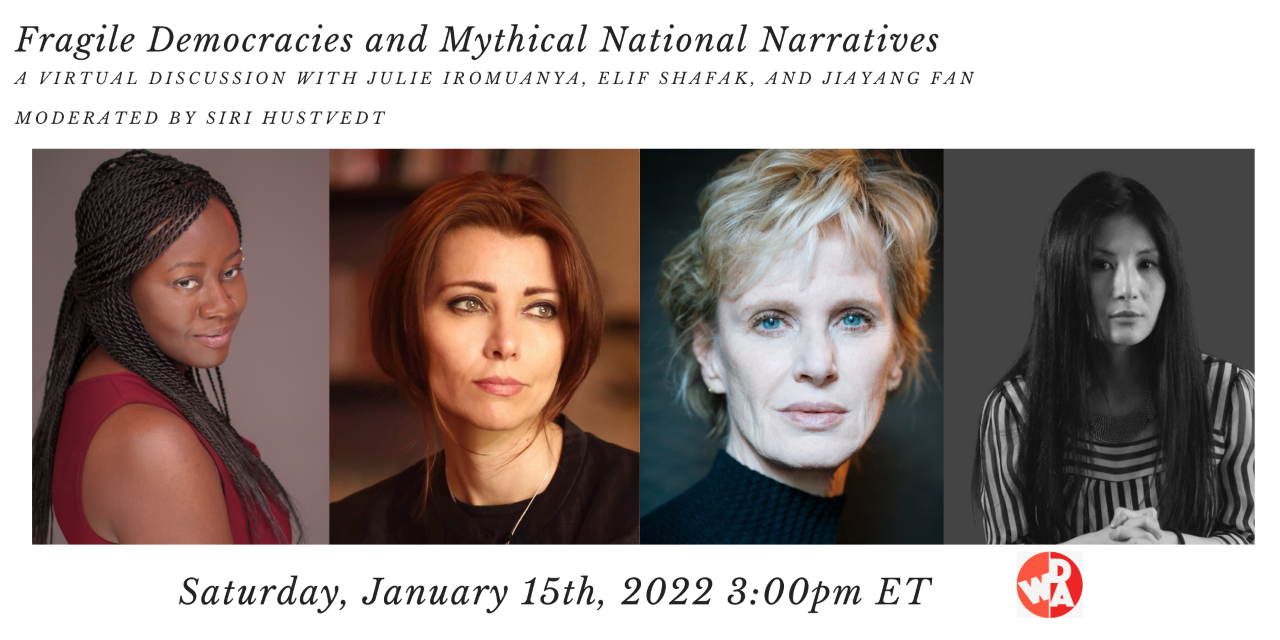 The current threat to democracy around the world has taken the form of right-wing, populist, authoritarian movements, all of which employ culturally specific rhetorical devices and mythical national narratives that carry strong emotional meanings for part of the population. These slogans and stories both invigorate and justify attacks on democracy to reinforce the powers-that-be and/or undermine the machinery fundamental to a working pluralist democracy—the vote. This seminar will feature writers from fragile democracies in diverse regions of the world (including the United States) examining the crucial role language and fiction play in authoritarian discourse. Do our diverse narratives have features in common? What role has technology played in spreading and normalizing brutal rhetoric and false stories? How do stories fit into historical power dynamics (race, gender, religious differences) that have allowed speech to some and have silenced others? When is speech truly free? What is a counter-narrative? What constitutes a language of resistance?

JULIE IROMUANYA is the author of Mr. and Mrs. Doctor (Coffee House Press), a finalist for the PEN/Faulkner Award, the PEN/Robert W. Bingham Prize for Debut Fiction, the Etisalat Prize for Literature (now 9 Mobile Prize for Literature), and the National Book Critics Circle John Leonard Prize for Debut Fiction. Her scholarly-critical work most recently appears in Meridians: Feminism, Race, Transnationalism; Callaloo: A Journal of African American Arts and Letters; and Afropolitan Literature as World Literature (Bloomsbury Publishing). She is a 2020 George A. and Eliza Gardner Howard Foundation fellow, and she was the inaugural Herbert W. Martin Fellow in Creative Writing at the University of Dayton. She has also been a Kimbilio Fellow, a Jane Tinkham Broughton Fellow in Fiction at Bread Loaf Writers Conference, a Tennessee Williams Scholar at the Sewanee Writers Conference, a Bread Loaf Bakeless/Camargo France Fellow, a Brown Foundation Fellow at the Dora Maar House, a Jan Michalski Fellow at “The Treehouses,” and the Eternal Vada Fellow at Sangam House. Her work has also been supported by fellowships and residencies at the MacDowell Colony, the Vermont Studio Center, the Ragdale Foundation, Villa Lena, and Villa Ruffieux. Iromuanya earned her B.A. at the University of Central Florida and her M.A. and Ph.D. at the University of Nebraska-Lincoln, where she was a Presidential Fellow, Richard H. Larson Fellow, and award-winning teacher. She is an assistant professor and director of undergraduate studies in the Program in Creative Writing at the University of Chicago and affiliate faculty of the Center for the Study of Gender and Sexuality and the Center for the Study of Race, Politics, and Culture. She is at work on a second novel, A Season of Light. http://julieiromuanya.com

ELIF SHAFAK is an award-winning British-Turkish author who has published 18 books translated into 50 languages. Shafak holds a PhD in political science and has taught at universities in Turkey, the US, and the UK, including Oxford University, where she is an honorary fellow. She contributes to major publications around the world, has been awarded the title of Chevalier des Arts et des Lettres, and is a member of the Royal Society of Literature.

JIAYANG FAN became a staff writer at The New Yorker in 2016. Her reporting on China, American politics, and culture has appeared in the magazine and on newyorker.com since 2010. She is currently working on her first book, “Motherland,” which will be published by Farrar, Straus, and Giroux in 2023.

SIRI HUSTVEDT, a novelist and scholar, has a PhD in English literature and is a lecturer in psychiatry at Weill Cornell Medical College. She is the author of a book of poems, seven novels, four collections of essays, and two works of nonfiction. She has published papers in various academic and scientific journals and is the recipient of numerous awards, including the prestigious Princess of Asturias Award for Literature, the European Charles Veillon Essay Prize, an American Academy of the Arts and Letters Award in Literature, and the Los Angeles Times Book Prize for Fiction for The Blazing World, which was also longlisted for the Man Booker Prize. She lives in Brooklyn, New York.