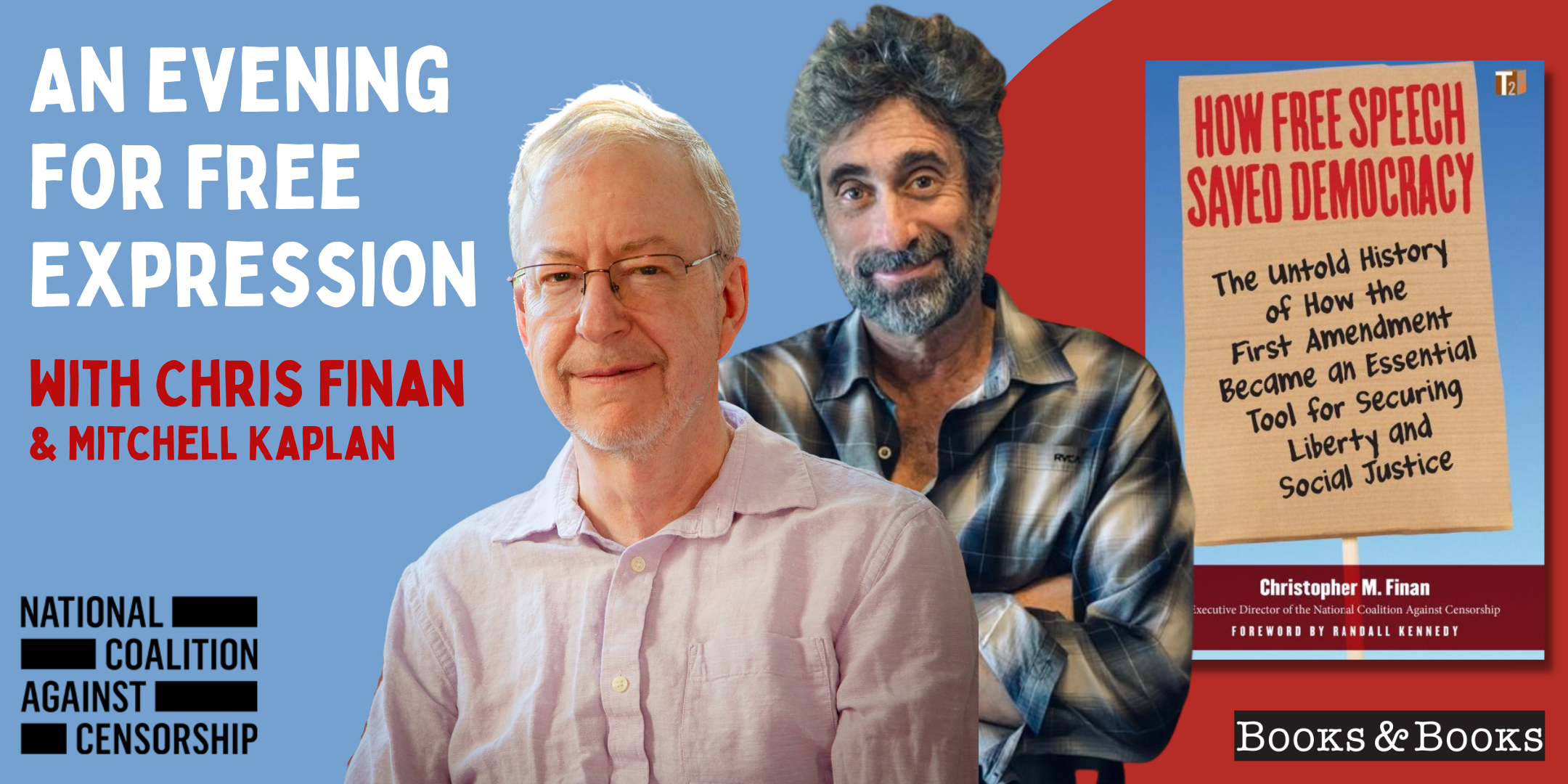 An Evening for Free Expression

Executive Director of the National Coalition Against Censorship (NCAC)

How Free Speech Saved Democracy: The Untold History of How the First Amendment Became an Essential Tool for Securing Liberty and Social Justice

Join us in-person at Books & Books as NCAC’s executive director Chris Finan joins us to address censorship issues in our community and across the nation. Come show your support, network with us, and find out what you can do to fight censorship in all its forms.

Chris Finan will also discuss his latest book, How Free Speech Saved Democracy: The Untold History of How the First Amendment Became an Essential Tool for Securing Liberty and Social Justice. Learn more about NCAC’s work and the critical fight for free speech in schools, books, the arts and beyond. Chris will present some of the surprising–and heartening–findings from his book and answer audience questions. 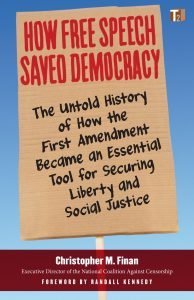 “A historical demonstration of the indispensability of the First Amendment [and] … an earnest and timely argument for [its] enduring value.”  —Kirkus Reviews

“Great storytelling about the history and importance of the First Amendment, from someone who has spent his life defending — and using — it.”  —Mary Beth Tinker

Free speech is not an obstacle to change: it is the way change happens

Uncovering vivid and engaging stories about First Amendment pioneers, How Free Speech Saved Democracy shows how their struggle made possible the surging protests that aim to expand democracy today.

How Free Speech Saved Democracy is a revealing reminder that First Amendment rights have often been curtailed in efforts to block progress, and that current measures to reduce hurtful language and to end hate speech could backfire on those who promote them.

To those who see free speech as a threat to democracy, Finan offers engaging evidence from a long and sometimes challenging history of free speech in America to show how free speech has been essential to expanding democracy.

From the beginning of American history, free speech has been used to advocate for change. In the 19th century, abolitionists, advocates for women’s rights, and leaders of the labor movement had to fight for free speech. In the 20th century, the civil rights and anti-war movements expanded free speech, creating a shield for every protest movement we see today.

Written by a historian who became a full-time defender of civil liberties and has spent four decades advocating for the rights of victims of censorship, this book grew out of Finan’s desire to address the declining support for free speech that is occurring as our country becomes increasingly polarized.

Through his evocative storytelling Finan demonstrates how the most effective antidote for the growth of hate speech and violence is support for and cultivation of the robust alternative of free speech.

CHRISTOPHER M. FINAN has been involved in the fight against censorship for 35 years. He is executive director of the National Coalition Against Censorship and the former president of the American Booksellers Foundation for Free Expression. After working as a newspaper reporter, he studied American history at Columbia University, where he received his Ph.D. in 1992. He is the author of Alfred E. Smith: The Happy Warrior, Drunks: An American History, and From the Palmer Raids to the Patriot Act: A History of the Fight for Free Speech in America, winner of the American Library Association’s Eli M. Oboler Award.

MITCHELL KAPLAN is the owner and founder of Books & Books and co-founder of the Miami Book Fair. He is also an NCAC board member.