The Hidden History of American Oligarchy: A Virtual Evening with Thom Hartmann and David Korten

The Hidden History of American Oligarchy: A Virtual Evening with Thom Hartmann and David Korten

Thom Hartmann, the most popular progressive radio host in America and a New York Times bestselling author, looks at the history of the battle against oligarchy in America–and how we can win the latest round. He is in conversation with David Korten, co-founder of YES! Magazine, president of the Living Economies Forum, and a member of the Club of Rome.

In his new book Thom Hartmann traces the history of this struggle against oligarchy from America’s founding to the United States’ war with the feudal Confederacy to President Franklin Roosevelt’s struggle against “economic royalists,” who wanted to block the New Deal. 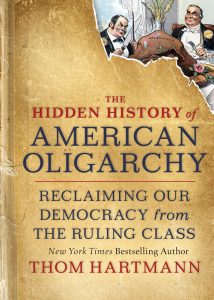 Previous Post
The Rain Heron: An Evening with Robbie Arnott and Jeff VanderMeer
Next Post
How To Not Die Alone: A Virtual Evening with Logan Ury and Ellen Huet