It’s Women’s History Month! We’re celebrating the women who have shaped our history, written characters we loved, lived lives we admired and learned from…so here are 5 stellar titles we’ve got on our list this March. 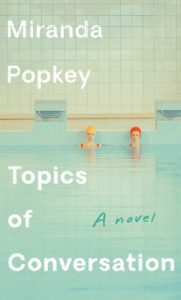 Miranda Popkey’s first novel is about desire, disgust, motherhood, loneliness, art, pain, feminism, anger, envy, guilt–written in language that sizzles with intelligence and eroticism. The novel is composed almost exclusively of conversations between women–the stories they tell each other, and the stories they tell themselves, about shame and love, infidelity and self-sabotage–and careens through twenty years in the life of an unnamed narrator hungry for experience and bent on upending her life. Edgy, wry, shot through with rage and despair, Topics of Conversation introduces an audacious and immensely gifted new novelist. 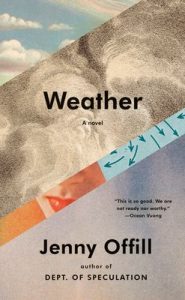 From the beloved author of the nationwide best seller Dept. of Speculation—one of the New York Times Book Review‘s Ten Best Books of the Year—a “darkly funny and urgent” (NPR) tour de force about a family, and a nation, in crisis

Lizzie Benson slid into her job as a librarian without a traditional degree. But this gives her a vantage point from which to practice her other calling: she is a fake shrink. For years she has tended to her God-haunted mother and her recovering addict brother. They have both stabilized for the moment, but Lizzie has little chance to spend her new free time with husband and son before her old mentor, Sylvia Liller, makes a proposal. Sylvia has become famous for her prescient podcast, Hell and High Water, and wants to hire Lizzie to answer the mail she receives: from left-wingers worried about climate change and right-wingers worried about the decline of western civilization.

As Lizzie dives into this polarized world, she begins to wonder what it means to keep tending your own garden once you’ve seen the flames beyond its walls. When her brother becomes a father and Sylvia a recluse, Lizzie is forced to address the limits of her own experience—but still she tries to save everyone, using everything she’s learned about empathy and despair, conscience and collusion, from her years of wandering the library stacks . . . And all the while the voices of the city keep floating in—funny, disturbing, and increasingly mad.

The Story of More 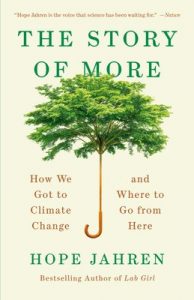 Hope Jahren is an award-winning scientist, a brilliant writer, a passionate teacher, and one of the seven billion people with whom we share this earth. In The Story of More, she illuminates the link between human habits and our imperiled planet. In concise, highly readable chapters, she takes us through the science behind the key inventions—from electric power to large-scale farming to automobiles—that, even as they help us, release greenhouse gases into the atmosphere like never before. She explains the current and projected consequences of global warming—from superstorms to rising sea levels—and the actions that we all can take to fight back. At once an explainer on the mechanisms of global change and a lively, personal narrative given to us in Jahren’s inimitable voice, The Story of More is the essential pocket primer on climate change that will leave an indelible impact on everyone who reads it. 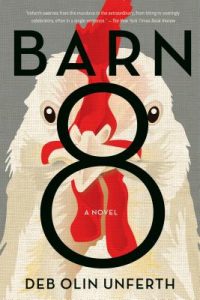 Two auditors for the U.S. egg industry go rogue and conceive a plot to steal a million chickens in the middle of the night—an entire egg farm’s worth of animals. Janey and Cleveland—a spirited former runaway and the officious head of audits—assemble a precarious, quarrelsome team and descend on the farm on a dark spring evening. A series of catastrophes ensues.

Deb Olin Unferth’s wildly inventive novel is a heist story of a very unusual sort. Swirling with a rich array of voices, Barn 8 takes readers into the minds of these renegades: a farmer’s daughter, a former director of undercover investigations, hundreds of activists, a forest ranger who suddenly comes upon forty thousand hens, and a security guard who is left on an empty farm for years. There are glimpses twenty thousand years into the future to see what chickens might evolve into on our contaminated planet. We hear what hens think happens when they die. In the end the cracked hearts of these indelible characters, their earnest efforts to heal themselves, and their radical actions will lead them to ruin or revelation.

Funny, whimsical, philosophical, and heartbreaking, Barn 8 ultimately asks: What constitutes meaningful action in a world so in need of change? Unferth comes at this question with striking ingenuity, razor-sharp wit, and ferocious passion. Barn 8 is a rare comic-political drama, a tour de force for our time.

Such a Fun Age 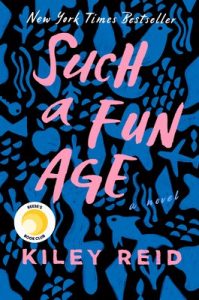 A striking and surprising debut novel from an exhilarating new voice, Such a Fun Age is a page-turning and big-hearted story about race and privilege, set around a young black babysitter, her well-intentioned employer, and a surprising connection that threatens to undo them both.

Alix Chamberlain is a woman who gets what she wants and has made a living, with her confidence-driven brand, showing other women how to do the same. So she is shocked when her babysitter, Emira Tucker, is confronted while watching the Chamberlains’ toddler one night, walking the aisles of their local high-end supermarket. The store’s security guard, seeing a young black woman out late with a white child, accuses Emira of kidnapping two-year-old Briar. A small crowd gathers, a bystander films everything, and Emira is furious and humiliated. Alix resolves to make things right.

But Emira herself is aimless, broke, and wary of Alix’s desire to help. At twenty-five, she is about to lose her health insurance and has no idea what to do with her life. When the video of Emira unearths someone from Alix’s past, both women find themselves on a crash course that will upend everything they think they know about themselves, and each other.

With empathy and piercing social commentary, Such a Fun Age explores the stickiness of transactional relationships, what it means to make someone “family,” and the complicated reality of being a grown up. It is a searing debut for our times.

Previous Post
Stream All the Bright Places NOW on Netflix!
Next Post
We’re closing our doors for a little while.