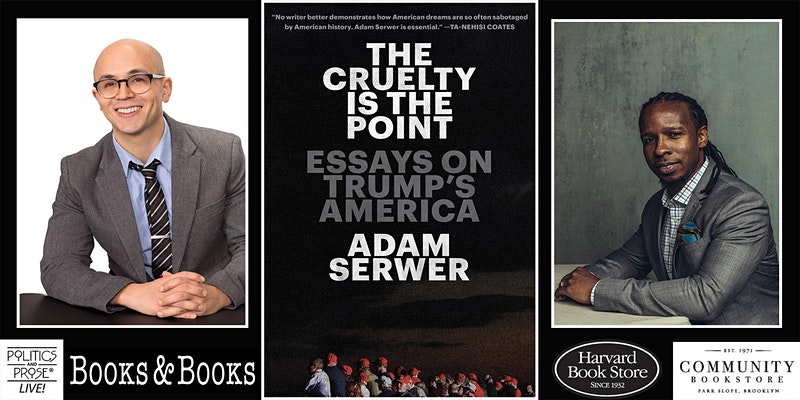 The Cruelty Is the Point: A Virtual Event with Adam Serwer & Ibram X. Kendi

An Evening with Adam Serwer

In conversation with Ibram X Kendi

The Cruelty is the Point

Award-winning journalist Adam Serwer chats with author and activist, Ibram X Kendi on the cruelty of the Trump Administration.

We are thrilled to present this event in partnership with our friends at Harvard Book Store, Politics & Prose and Community Bookstore!

Tickets start at $5 (+ tax and fee)and includes a $5 OFF online only discount code toward your purchase at booksandbooks.com. We’ll also have a ticket/book bundle option that includes a copy of The Cruelty is the Point for $28 + tax/fee + shipping.Once you make your purchase, we will send you a Zoom Webinar registration link that will give you access to the event via private link. See below for detailed information on tickets.

From an Award-winning journalist at The Atlantic, these searing essays make a damning case that cruelty is not merely an unfortunate byproduct of the Trump administration but it’s main objective and the central theme of the American Project.

Taking joy in suffering is more human than we’d like to admit. The cruelty of the Trump administration’s policies and the ritual rhetorical flaying of his targets are intimately connected. Shared cruelty and the delight it brings are critical moments of connection for white supremacists, a fact that is not new.

Adam Serwer has been chronicling our political landscape for the last decade. He is one of the most resonant voices of our time, relentless in his pursuit of fact, unsentimental in his storytelling, yet deeply humane in his perspective. At The Atlantic, he has written about the Supreme Court’s role in Jim Crow; the history of “white genocide” conspiracy theory; hoaxes; racism; inequality; and of course, Trump.

But this collection isn’t just about Trump—it’s an investigation across centuries interrogating both this moment and its antecedents to reveal the deep roots that have given rise to Trumpism. New material includes four, audience-building essays that expand upon the collection’s themes, and unearth more approaches to nationalism and pluralism. Like the polarizing effect Trump’s administration has had on American Jews; tracing the emergence of police unions; and making the historical case for abolishing billionaires to preserve American democracy. Additionally, new introductions will provide context and insight into the impact of previously published pieces, why they garnered so much attention amongst media figures, politicians, and social platforms.

With progressive language, compelling frameworks, and Serwer’s characteristic approach of combining polemic with reporting, this collection maps the social, economic, and ideological currents that built and enabled today’s spectacle, and the devastating stakes of continuing in this direction. The Cruelty is the Point dares us, the reader, not to look away. 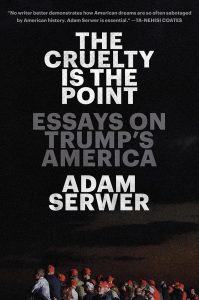 Adam Serwer has written for The Atlantic since 2016, focusing on contemporary politics while often viewing it through the lens of history. Serwer was a Spring Fellow at the Shorenstein Center at the Kennedy School of Government at Harvard University as well as the Ira Lipman Fellow at the Columbia University School of Journalism. He is the recipient of the 2019 Hillman Prize for opinion journalism. He lives in San Antonio, Texas, with his family.

Ibram X. Kendi is a #1 New York Times bestselling author, a professor of history, and the founding director of the Boston University Center for Antiracist Research. He is a columnist at The Atlantic and a correspondent with CBS News. He is the author of five books including Stamped from the Beginning: The Definitive History of Racist Ideas in America, which won the National Book Award for Nonfiction; How to Be an Antiracist; Stamped: Racism, Antiracism, and You, co-authored with Jason Reynolds; and Antiracist Baby, illustrated by Ashley Lukashevsky.