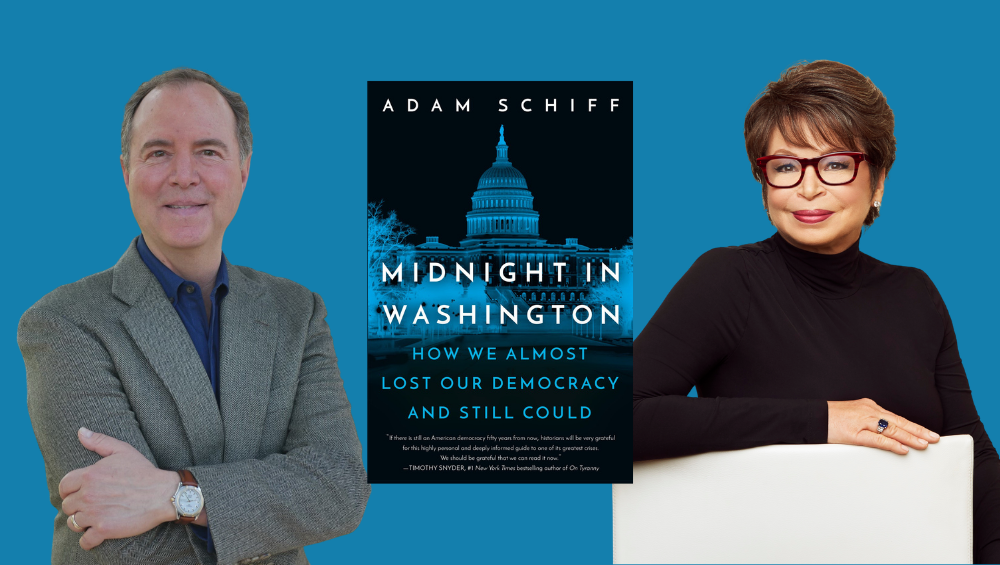 Midnight in Washington: An Evening with Adam Schiff and Valerie Jarrett

An Evening with Adam Schiff

in conversation with Valerie Jarrett

Midnight in Washington: How We Almost Lost Our Democracy and Still Could

From the congressman who led the first impeachment of Donald J. Trump, the vital inside account of American democracy in its darkest hour, and a warning that the forces of autocracy unleashed by Trump remain as potent as ever.

In the years leading up to the election of Donald Trump, Congressman Adam Schiff had already been sounding the alarm over the resurgence of autocracy around the world, and the threat this posed to the United States. But as he led the probe into Donald Trump’s Russia and Ukraine-related abuses of presidential power, Schiff came to the terrible conclusion that the principal threat to American democracy now came from within.

In Midnight in Washington, Schiff argues that the Trump presidency has so weakened our institutions and compromised the Republican Party that the peril will last for years, requiring unprecedented vigilance against the growing and dangerous appeal of authoritarianism. The congressman chronicles step by step just how our democracy was put at such risk, and traces his own path to meeting the crisis—from serious prosecutor, to congressman with an expertise in national security and a reputation for bipartisanship, to liberal lightning rod, scourge of the right, and archenemy of a president. Schiff takes us inside his team of impeachment managers and their desperate defense of the constitution amid the rise of a distinctly American brand of autocracy.

Deepening our understanding of prominent public moments, Schiff reveals the private struggles, the internal conflicts, and the triumphs of courage that came with defending the republic against a lawless president—but also the slow surrender of people that he had worked with and admired to the dangerous immorality of a president engaged in an historic betrayal of his office. Schiff’s fight for democracy is one of the great dramas of our time, told by the man who became the president’s principal antagonist. It is a story that began with Trump but does not end with him, taking us through the disastrous culmination of the presidency and Schiff’s account of January 6, 2021, and how the anti-democratic forces Trump unleashed continue to define his party, making the future of democracy in America more uncertain than ever.

“If he failed to secure the conviction of Donald Trump in the first impeachment trial, Adam Schiff has now vanquished him forever in these pages. This book will stand as the touchstone of truth against any attempts to distort or rewrite this crucial piece of history. Congressman Schiff has restored our faith in the nobility of public service and has shown what one dedicated patriot—courageous, intelligent, and fearless—can still accomplish even in a divided country.”

“Midnight in Washington is a compelling account from a man who refused to allow our venerable institutions to crumble at the hands of authoritarianism. Equally vital, he refused to allow his Republican colleagues to look the other way. Rep. Schiff does not merely provide riveting details from inside the halls of power; he delivers a much-needed warning about the threats facing America from within and an urgent how-to guide for preserving our nation.””

“In this thoughtful, absorbing  and revelatory memoir, an important champion and defender of American democracy shows us how he became a national leader and, from his experiences on the inside, how close the Trump regime brought us to losing our system.  Please read Adam Schiff’s book carefully and pay close heed to his warnings about the dangers that remain.”

“Adam Schiff has performed a great public service with this engrossing and illuminating new book. By taking us inside the impeachments of the 45th president, Schiff has written an important first draft of history—but it is history that is not remote or retrospective but all too immediate, for the threats to the Republic Schiff so deftly describes remain with us. If you care about American democracy, the rule of law, and the future of our imperiled nation, this is essential reading.”

“If there is still an American democracy fifty years from now, historians will be very grateful for this highly personal and deeply informed guide to one of its greatest crises. We should be grateful that we can read it now.”

ADAM SCHIFF is the United States Representative for California’s 28th Congressional District. In his role as Chairman of the House Permanent Select Committee on Intelligence, Schiff led the first impeachment of Donald J. Trump. Before he served in Congress, he worked as an Assistant U.S. Attorney in Los Angeles, and as a California State Senator. He and his wife Eve have two children, Alexa and Elijah.

VALERIE JARRETT is the President of the Barack Obama Foundation and a Senior Distinguished Fellow at The University of Chicago Law School. She is the author of the New York Times bestselling book Finding My Voice: My Journey to the West Wing and the Path Forward, published in April 2019. She serves as Board Chairman of Civic Nation, Co-Chair of The United State of Women, senior advisor to Attn, and is a One Million Black Women Advisory Board member. Jarrett also serves on the boards of Walgreens Boot Alliance, Inc., Ralph Lauren Corporation, Lyft, Inc., 2U, Inc., Ariel Investments, The John F. Kennedy Center for Performing Arts, The Innocence Project, Sesame Street Workshop and the Economic Club of Chicago.

Ms. Jarrett was the Senior Advisor to President Barack Obama from 2009-2017 making her the longest serving senior advisor in history. She oversaw the Offices of Public Engagement and Intergovernmental Affairs and Chaired the White House Council on Women and Girls. Ms. Jarrett worked throughout her tenure at the White House to mobilize elected officials, business and community leaders, and diverse groups of advocates. She led the Obama Administration’s efforts to expand and strengthen access to the middle class, and boost American businesses and our economy. She championed the creation of equality and opportunity for all Americans, and economically and politically empowering women in the United States and around the world. She oversaw the Administration’s advocacy for workplace policies that empower working families, including equal pay, raising the minimum wage, paid leave, paid sick days, workplace flexibility, and affordable childcare, and led the campaigns to reform our criminal justice system, end sexual assault, and reduce gun violence.

Ms. Jarrett has a background in both the public and private sectors. She served as the Chief Executive Officer of The Habitat Company in Chicago, the Commissioner of Planning and Development for the city of Chicago, Deputy Chief of Staff for Chicago Mayor Richard M. Daley and practiced law for ten years in the private and public sector. She also served as the director of numerous corporate and not-for-profit boards including leadership positions as Chairman of the Board of the Chicago Stock Exchange, Chairman of the University of Chicago Medical Center Board of Trustees, Vice Chairman of the University of Chicago Board of Trustees, Director of the Federal Reserve Bank of Chicago and Chair of Chicago Transit Board. Ms. Jarrett has also received numerous awards and honorary degrees, including TIME’s “100 Most Influential People” Award.

Jarrett received her B.A. from Stanford University in 1978 and her J.D. from the University of Michigan Law School in 1981.