This year’s International Booker Prize shortlist is led by women 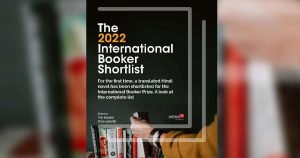 Here is the Shortlist! 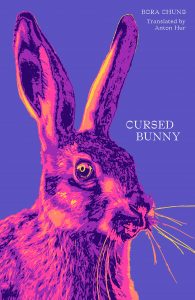 Cursed Bunny is a genre-defying collection of short stories by Korean author Bora Chung. Blurring the lines between magical realism, horror, and science-fiction, Chung uses elements of the fantastic and surreal to address the very real horrors and cruelties of patriarchy and capitalism in modern society. Anton Hur’s translation skilfully captures the way Chung’s prose effortlessly glides from being terrifying to wryly humorous. 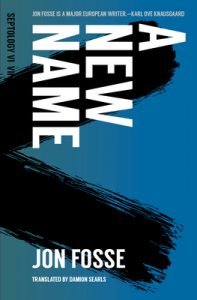 Asle is an aging painter and widower who lives alone on the west coast of Norway. His only friends are his neighbor, Åsleik, a traditional fisherman-farmer, and Beyer, a gallerist who lives in the city. There, in Bj rgvin, lives another Asle, also a painter but lonely and consumed by alcohol. Asle and Asle are doppelgängers–two versions of the same person, two versions of the same life. Written in melodious and hypnotic “slow prose,” A New Name is the final installment of Jon Fosse’s Septology, “a major work of Scandinavian fiction” (Hari Kunzru) and an exquisite metaphysical novel about love, art, God, friendship, and the passage of time.

HEAVEN by Mieko Kawakami, translated from Japanese by Samuel Bett and David Boyd

From the bestselling author of Breasts and Eggs and international literary sensation Mieko Kawakami, a sharp and illuminating novel about the impact of violence and the power of solidarity.

A bold foray into new literary territory, Kawakami’s novel is told in the voice of a 14-year-old student subjected to relentless torment for having a lazy eye. Instead of resisting, the boy chooses to suffer in complete resignation. The only person who understands what he is going through is a female classmate who suffers similar treatment at the hands of her tormentors.

These raw and realistic portrayals of bullying are counterbalanced by textured exposition of the philosophical and religious debates concerning violence to which the weak are subjected.

Heaven stands as a dazzling testament to Kawakami’s literary talent. There can be little doubt that it has cemented her reputation as one of today’s most important young authors working to expand the boundaries of contemporary Japanese literature. 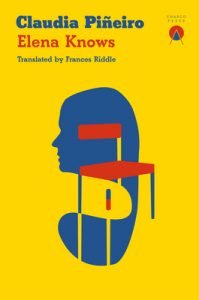 After Rita is found dead in a church she used to attend, the official investigation into the incident is quickly closed. Her sickly mother is the only person still determined to find the culprit. Chronicling a difficult journey across the suburbs of the city, an old debt and a revealing conversation, Elena Knows unravels the secrets of its characters and the hidden facets of authoritarianism and hypocrisy in our society. 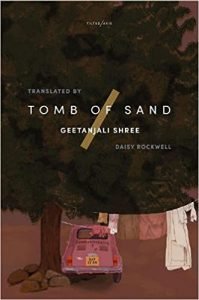 TOMB OF SAND by Geetanjali Shree, translated from Hindi by Daisy Rockwell / not available in US yet

An urgent yet engaging protest against the destructive impact of borders, whether between religions, countries or genders. Translated by Daisy Rockwell. 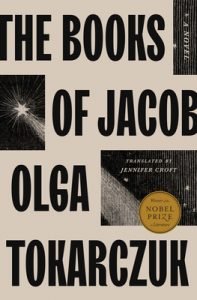 THE BOOKS OF JACOB by Olga Tokarczuk, translated from Polish by Jennifer Croft

The Nobel Prize–winner’s richest, most sweeping and ambitious novel yet follows the comet-like rise and fall of a mysterious, messianic religious leader as he blazes his way across eighteenth-century Europe.

In the mid-eighteenth century, as new ideas—and a new unrest—begin to sweep the Continent, a young Jew of mysterious origins arrives in a village in Poland. Before long, he has changed not only his name but his persona; visited by what seem to be ecstatic experiences, Jacob Frank casts a charismatic spell that attracts an increasingly fervent following. In the decade to come, Frank will traverse the Hapsburg and Ottoman empires with throngs of disciples in his thrall as he reinvents himself again and again, converts to Islam and then Catholicism, is pilloried as a heretic and revered as the Messiah, and wreaks havoc on the conventional order, Jewish and Christian alike, with scandalous rumors of his sect’s secret rituals and the spread of his increasingly iconoclastic beliefs. The story of Frank—a real historical figure around whom mystery and controversy swirl to this day—is the perfect canvas for the genius and unparalleled reach of Olga Tokarczuk. Narrated through the perspectives of his contemporaries—those who revere him, those who revile him, the friend who betrays him, the lone woman who sees him for what he is—The Books of Jacob captures a world on the cusp of precipitous change, searching for certainty and longing for transcendence.

In a nod to books written in Hebrew, The Books of Jacob is paginated in reverse, beginning on p. 955 and ending on p. 1 – but read traditionally, front cover to back.

🎙NEW on The Literary Life with Mitchell Kaplan: Peter Balakian on How the Transmission of Trauma Across Generations Informs His Poetry
Here are this year’s Pulitzer Prize winners
What to Read This Mother’s Day
Celebrate Asian/Pacific American Heritage Month with these reads
Copyright © 2019 | Books & Books | All rights reserved. Your Locally-Owned Independent Bookseller