You Have a Friend in 10 A: A Virtual Evening with Maggie Shipstead and Elin Hilderbrand

You Have a Friend in 10 A: Stories 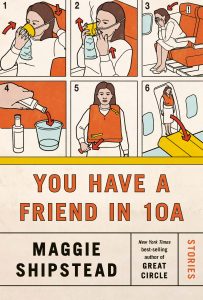 From the Booker Prize nominee and New York Times best-selling author of Great Circle, a piercing, irresistible first collection of short stories exquisite in their craft and audacious in their range

A love triangle plays out over decades on a Montana dude ranch. A hurdler and a gymnast spend a single night together in the Olympic village. Mistakes and mysteries weave an intangible web around an old man’s deathbed in Paris, connecting disparate destinies. On the slopes of an unfinished ski resort, a young woman searches for her vanished lover. A couple’s Romanian honeymoon goes ominously awry, and, in the mesmerizing title story, a former child actress breaks with her life in a Hollywood cult.

In these and other stories, knockout after knockout, Maggie Shipstead delivers another “extraordinary” (New York Times) work of fiction and seals her reputation as a writer of “breathtaking range and skill” (Kirkus Reviews). Rich in imagination and dazzling in its shapeshifting style, You Have a Friend in 10A excavates the complexities of love, sex, and life in ways unsparing and hilarious, sharp-eyed and tender.

MAGGIE SHIPSTEAD is the New York Times best-selling author of the novels Great Circle,Astonish Me, and Seating Arrangements and the winner of the Dylan Thomas Prize and the Los Angeles Times Book Prize for first fiction. She is a graduate of the Iowa Writers’ Workshop, a former Wallace Stegner Fellow at Stanford, and the recipient of a fellowship from the National Endowment for the Arts. She lives in Los Angeles.

Elin Hilderbrand is the author of twenty-eight novels, including the forthcoming THE HOTEL NANTUCKET (June 14, 2022). She is a proud 1991 graduate of Johns Hopkins University where she majored in Writing Seminars. In her senior year at Hopkins, Elin had her first short story, “Misdirection,” accepted for publication in Seventeen Magazine.

After a short stint working in publishing and teaching in New York City, she moved to Nantucket permanently in 1994. She attended the University of Iowa writers workshop and earned her MFA in 1998, and published her first novel, THE BEACH CLUB, in the summer of 2000. Her 2019 novel, SUMMER OF ’69 was her first novel to debut at #1 on the New York Times bestseller list. She is the mother of three children and loves riding the Peloton, cooking, and going to the beach. She will retire with her summer of 2024 book and plans on becoming a book influencer.