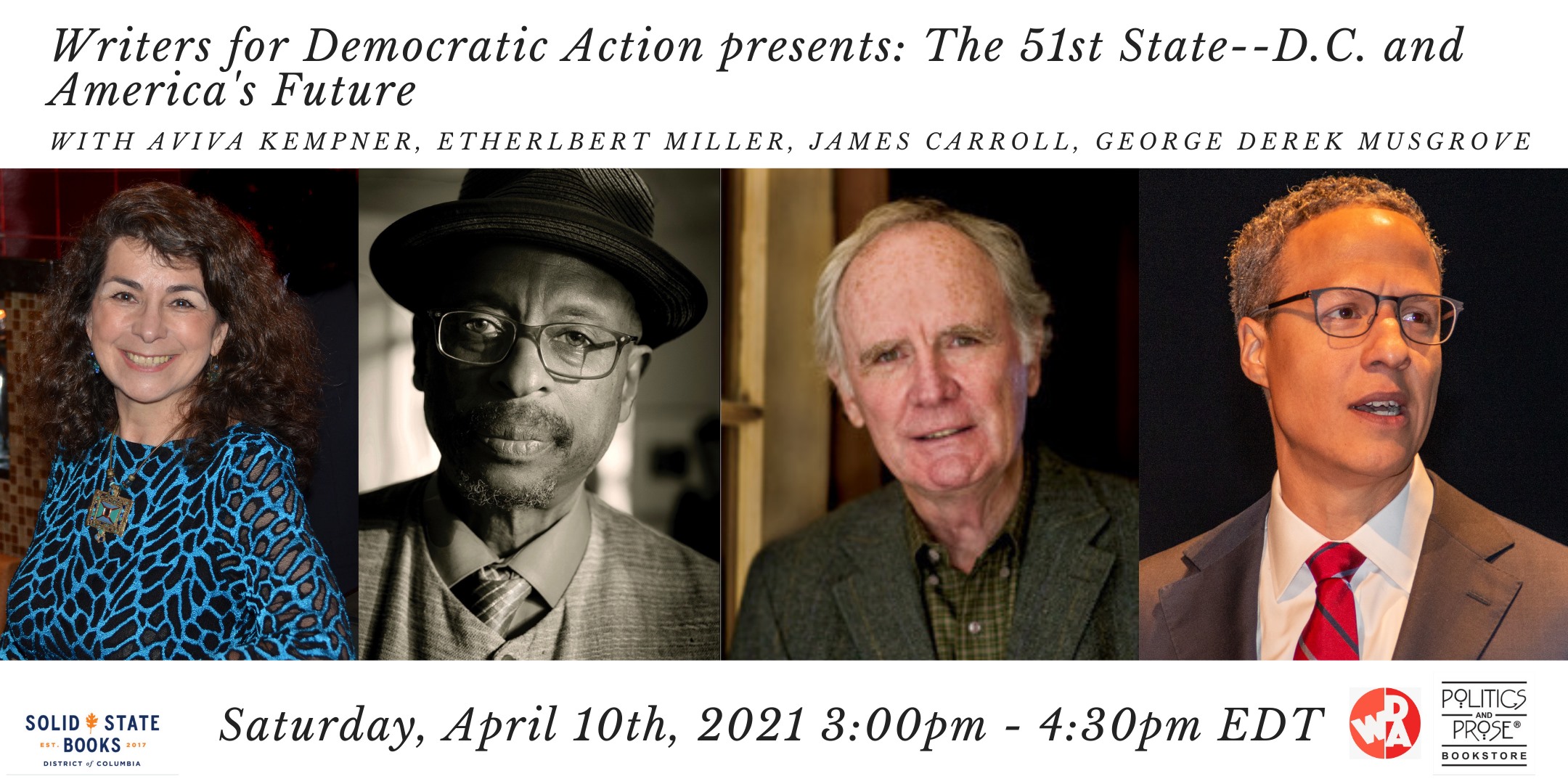 James Caroll moderates this conversation on DC statehood with Derek Musgrove, Aviva Kempner, and Ethelbert Miller on Politics & Prose Live! This event is presented in partnership with our friends at Solid State Books and the Writers for Democratic Action organization.

The District of Columbia’s citizens pay taxes, vote in general elections, and bear all the responsibilities of citizenship, yet DC still does not have representation as an official state. This panel will explore DC’s history as a non-state and discuss what’s next in the divisive fight for statehood.

James Carroll is the author of twelve novels, and eight works of non-fiction. For twenty-three years, he wrote an oped column for The Boston Globe, and his work has appeared in The New Yorker, The Atlantic, and other publications. He has received the National Book Award, the PEN Galbraith Award, and the Scripps Howard Award. His new book is The Truth at the Heart of the Lie: How the Catholic Church Lost Its Soul.

Ethelbert Miller is a literary activist and author of two memoirs and several poetry collections. He hosts the WPFW morning radio show On the Margin with E. Ethelbert Miller and hosts and produces The Scholars on UDC-TV which received a 2020 Telly Award. Most recently, Miller received a grant from the D.C. Commission on the Arts and Humanities and a congressional award from Congressman Jamie Raskin in recognition of his literary activism. His latest book If God Invented Baseball, published by City Point Press, was awarded the 2019 Literary Award for poetry by the Black Caucus of the American Library Association. Miller has two forthcoming books: When Your Wife Has Tommy John Surgery and Other Baseball Stories and the little book of e.

Aviva Kempner makes award-winning documentaries films about under-known Jewish heroes for over forty years: The Spy Behind Home Plate, Rosenwald, Yoo-Hoo, Mrs. Goldberg, the Peabody winner The Life and Times of Hank Greenberg, and Partisans of Vilna. She is currently co-directing and co-producing Imagining the Indian about Native American mascoting and making Pissed Off, a short documentary on the female fight for potty parity in Congress, and a movie on screenwriter and Jewish activist Ben Hecht. Kempner is the editor of SEWomen.org, a new website about sports equality for women. She is also a writer and guest blogs for THEWRAP and other publications. Kempner is a member of the Academy of Motion Picture Arts and Sciences and a devoted DC statehood activist and board member of DC Vote.

George Derek Musgrove, Ph.D. is an Associate Professor of History and Africana Studies at the University of Maryland, Baltimore County. He is the author of Rumor, Repression, and Racial Politics: How the Harassment of Black Elected Officials Shaped Post-Civil Rights America, and co-author, with Chris Myers Asch, of Chocolate City, A History of Race and Democracy in the Nation’s Capital His latest project is “Black Power in Washington, D.C.” a web-based map of Black Power activism in the nation’s capital between 1961 and 1998. His work has appeared in the Washington Post, National Public Radio, the New York Times and The Root. He is currently working on a book project tentatively titled “We must take to the streets again”: The Black Power Resurgence in Conservative America, 1980-97, which explores the burst of black activism that rose in opposition to the urban crisis and the conservative retrenchment.