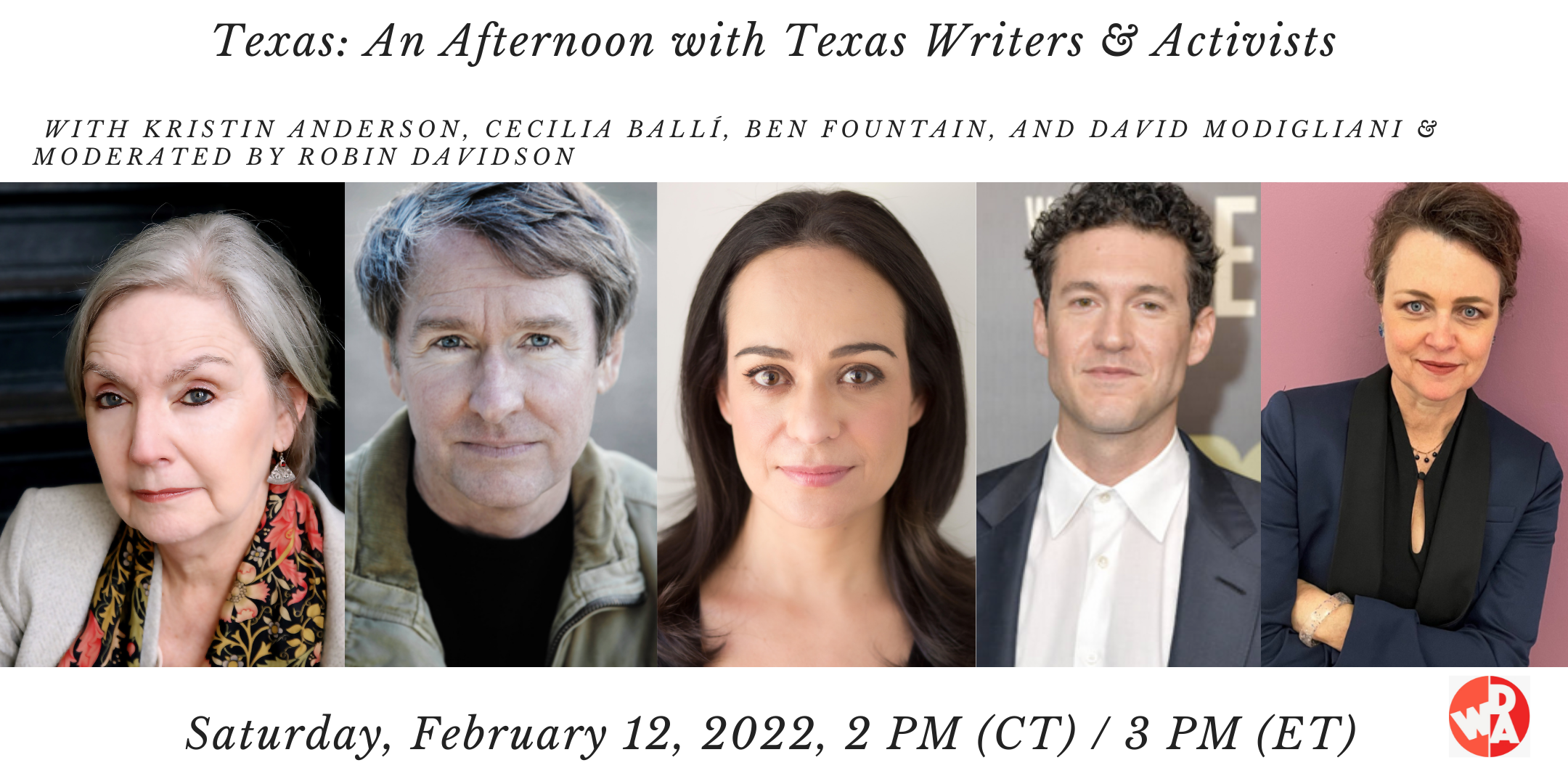 Governor Greg Abbott, Lieutenant Governor Dan Patrick, and Attorney General Ken Paxton are up for re-election in the State of Texas in 2022. In the August 2021 legislative session, a range of bills that are antagonistic to the values that many Texans know to be critically important to a safer, more equitable, more humane state culture were supported by these conservative lawmakers, and were signed into law by Governor Abbott. Laws that expand handgun access, prohibit abortions in the state, and limit the ability of Texas teachers to address issues of American history and race in the classroom are now in effect. In September 2021, Governor Abbott signed into law Senate Bill 1 which imposes wide-ranging restrictions on elections and voter access, and is effective as December 2, 2021. In this WDA session, Texas writers and activists will consider the threat to democracy these new laws pose and will discuss strategies for engaging and mobilizing the state’s voters, in particular the diverse Latinx population, in an effort to unseat current state leadership in the 2022 midterm elections.

KRISTIN J. ANDERSON is a professor of psychology at the Center for Critical Race Studies at the University of Houston-Downtown. She earned a Ph.D. in Psychology from the University of California, Santa Cruz, and is a social psychologist who studies stereotyping and prejudice, with a particular focus on backlash and entitlement’s role in the maintenance of inequality. Most recently, she is the author of Enraged, Rattled, and Wronged: Entitlement’s Response to Social Progress (2021, Oxford). She is also the author of Modern Misogyny: Anti-Feminism in a Post-Feminist Era (2015, Oxford) and Benign Bigotry: The Psychology of Subtle Prejudice(2010, Cambridge). She blogs for Psychology Today and Cambridge University Press. You can find her on Twitter @mouthyfeminist and at www.kristinjanderson.org.

CECILIA BALLÍ is a writer, journalist, and cultural anthropologist who has written extensively about Tejano history and culture, immigration, the sexual killing of young women in Ciudad Juárez, U.S.-Mexican border drug violence, and Mexican military disappearances and torture, and her stories have appeared in, among others, Texas Monthly, Harper’s Magazine, The New York Times, and Columbia Journalism Review. Ballí earned a Ph.D. in cultural anthropology from Rice University and taught for six years as an assistant professor at the University of Texas at Austin. She has conducted ethnographic fieldwork on Tejano and norteño musical culture and intra-ethnic tension between Mexicans and Mexican Americans; gendered violence on the border; U.S.-Mexico border enforcement and the border wall; and Latino voting and civic engagement. In 2018, Ballí launched Culture Concepts, a creative and strategic consultancy focused on ethnographic research, cultural analysis, and storytelling, and she currently serves as a Visiting Scholar at the University of Houston’s Center for Mexican American Studies. (https://www.ceciliaballi.com/)

ROBIN DAVIDSON, Houston Poet Laureate (2015–2017), is the author of Luminous Other, recipient of the Ashland Poetry Press Richard Snyder Prize, and two chapbooks, Kneeling in the Dojo and City that Ripens on the Tree of the World. Recipient of an NEA fellowship in translation, she is co-translator with Ewa Elżbieta Nowakowska of two volumes of Ewa Lipska’s poems from the Polish, The New Century and, most recently, Dear Ms. Schubert (Princeton University Press, 2021). Davidson served as a Fulbright scholar at the Jagiellonian University in Kraków, Poland, is a member of the Texas Institute of Letters, and teaches literature and creative writing as professor emeritus of English for the University of Houston-Downtown. Her newest book of poems, Mrs. Schmetterling, appeared from Arrowsmith Press in December 2021. (https://www.robindavidsonpoetry.com/)

BEN FOUNTAIN’s most recent book is Beautiful Country Burn Again: Democracy, Rebellion, and Revolution, and is based on the Pulitzer Prize-nominated essays and reportage that he wrote on the 2016 presidential election for The Guardian. He is also the author of a novel, Billy Lynn’s Long Halftime Walk, which in 2016 was adapted for film by three-time Oscar winner Ang Lee, and a short story collection, Brief Encounters with Che Guevara. His work has received the National Book Critics’ Circle Award for Fiction, the PEN/ Hemingway Award, the Los Angeles Times Book Award for Fiction, the Flaherty-Dunnan First Novel Prize, a Whiting Writer’s Award, an O. Henry Award, and two Pushcart Prizes, and has been a finalist for the National Book Award in both the U.S. and the U.K. (international authors division). His fiction and nonfiction have appeared in The New York Times, The New York Review of Books, The Wall Street Journal, Le Monde, IntranQu’îllités (Haiti), Reporte Sexto Piso (Mexico), Esquire, The Paris Review, Harper’s, Zoetrope: All-Story, The Oxford American, Sewanee Review, and elsewhere. His novel The Jacmel Wreck is forthcoming.

DAVID MODIGLIANI came to Texas for a writing fellowship at the Michener Center for Writers seventeen years ago, became a filmmaker and never left. From his base in Austin, he’s directed three feature documentaries capturing the human experience of politics in Texas: the Hulu film Crawford, about the tiny town that George W. Bush’s turned into the Western White House, the HBO film Running with Beto, which takes us behind the scenes of Beto O’Rourke’s 2018 Senate bid, and the 2020 Fuse film Ready Or Not, a coming of age story about teenager Marcel McClinton’s race for Houston City Council. David also directed a short film for the 2020 Democratic National Convention (Dress Rehearsal about Wisconsin’s pandemic primary), a feature documentary about the assassination of Huey P. Long (61 Bullets) and a Netflix series about combat veterans (Wounded: The Battle Back Home).