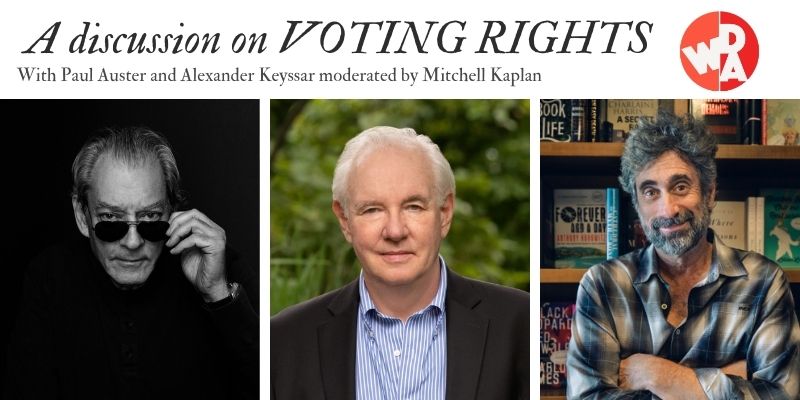 An Afternoon with Paul Auster and Alexander Keyssar

With more than 200 bills to suppress voting rights spreading through state legislatures across the country—at the same time that the most important voting rights bill since the 1960s is before Congress—Writers for Democratic Action has invited Alexander Keyssar of the Kennedy School of Government at Harvard to participate in a discussion with WDA members Paul Auster and Mitchell Kaplan about this urgent issue. The author of The Right to Vote and Why Do We Still Have an Electoral College?, Keyssar has been described by Congressman Jamie Raskin as “our great narrator of the American right to vote” and “a national treasure who keeps giving us the history we need right when we need it.”

Paul Auster is the bestselling author of 4 3 2 1, Winter Journal, Sunset Park, Invisible, The Book of Illusions, and The New York Trilogy, among many other works. He has been awarded the Prince of Asturias Award for Literature, the Prix Médicis étranger, an Independent Spirit Award, and the Premio Napoli. He is a member of the American Academy of Arts and Letters, the American Academy of Arts and Sciences, and is a Commandeur de l’Ordre des Arts et des Lettres. His work has been translated into more than forty languages. He lives in Brooklyn, New York.

Alexander Keyssar is the Matthew W. Stirling Jr. Professor of History and Social Policy. An historian by training, he has specialized in the exploration of historical problems that have contemporary policy implications. His latest book, entitled Why Do We Still Have the Electoral College? was published by Harvard University Press in July, 2020 and has been named a New Statesman book of the year. The Right to Vote: The Contested History of Democracy in the United States (2000), was named the best book in U.S. history by both the American Historical Association and the Historical Society; it was also a finalist for the Pulitzer Prize and the Los Angeles Times Book Award. A significantly revised and updated edition of The Right to Vote was published in 2009. Keyssar’s 1986 book, Out of Work: The First Century of Unemployment in Massachusetts, was awarded three scholarly prizes. Keyssar is coauthor of The Way of the Ship: America’s Maritime History Reenvisioned, 1600-2000 (2008), and of Inventing America, a text integrating the history of technology and science into the mainstream of American history. In addition, he has co-edited a book series on Comparative and International Working-Class History. In 2004/5, Keyssar chaired the Social Science Research Council’s National Research Commission on Voting and Elections, and he writes frequently for the popular press about American politics and history.

Mitchell Kaplan, a Miami Beach native, founded the independent bookstore chain Books & Books in 1982. Books & Books was named “Publishers’ Weekly Bookstore of the Year” in 2015. He is the co-founder of Miami Book Fair, a former president of the American Booksellers Association (ABA), and received the National Book Foundation’s prestigious “Literarian Award for Outstanding Service to the American Literary Community” in 2011.  He is the host of the podcast, “The Literary Life with Mitchell Kaplan” and with his partner Paula Mazur, formed the Mazur/Kaplan film production company to bring books to the screen.