An Evening with Perez Hilton

In conversation with Stephanie Sayfie Aagaard

TMI: My Life in Scandal

The story of how Mario Lavandeira becomes Perez Hilton, the world’s first and biggest celebrity blogger, with millions of readers around the globe.  With Perez’s help, many promising young artists reached the masses—Katy Perry, Adele, Amy Winehouse, and Lady Gaga, to name a few. Soon Perez was a Hollywood insider, but after a dramatic fallout with Lady Gaga, his blog became increasingly mean.   When people called him a bully and a hypocrite for outing gay celebrities, Perez was forced to reevaluate not only his alter ego, but also himself.  TMI reveals the man behind the blog in a new, revealing, and still juicy memoir. 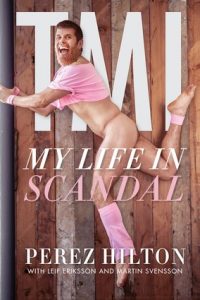 Perez Hilton is a celebrity gossip blogger, known and hated from coast to coast.

For twenty years, Stephanie served as Senior Director of Major Gifts, Corporate Relations, Marketing and Events at The Miami Project to Cure Paralysis She also produced both the Great Sports Legends Dinner and the Jack Nicklaus Celebrity Golf Invitational to benefit The Buoniconti Fund. For years, Stephanie has also been involved with The Miami Open tennis tournament as well, as a correspondent, columnist and interviewer. A native of Miami, Stephanie is very involved in the pulse of the community. She covers the social, celebrity, fashion, sports and charity scene in South Florida for her “Steph Sez” column every Sunday in The Miami Herald and is a monthly contributor for Indulge magazine.

Formerly, she created, produced and hosted her own entertainment television show, Steph Sez, in South Florida where she interviewed stars and luminaries from George Clooney to Gloria Estefan to Tiger Woods to Mikhail Gorbachev. Steph is proud mom of her two sons, Anders and Austin, and is married to Morten Aagaard.