An Evening with Jess Redman

In conversation with Natalie Lloyd

Quintessence is an extraordinary story from Jess Redman about friendship, self-discovery, interconnectedness, and the inexplicable elements that make you you.

Find the Elements. Grow the Light. Save the Starling.

Three months ago, twelve-year-old Alma moved to the town of Four Points. Her panic attacks started a week later, and they haven’t stopped—even though she’s told her parents that they have. She’s homesick and friendless and every day she feels less and less like herself.

But one day she finds a telescope in the town’s junk shop, and through its lens, she watches a star—a star that looks like a child—fall from the sky and into her backyard. Alma knows what it’s like to be lost and afraid, to long for home, and she knows that it’s up to her to save the star. And so, with the help of some unlikely new friends from Astronomy Club, she sets out on a quest that will take a little bit of science, a little bit of magic, and her whole self.

Blurbs about the book:

“A fanciful adventure with a rich emotional core and a fairy tale flair. An emphasis on Alma’s mental health and circular thought patterns proves an effective complement to the story’s magical elements, as her new endeavor and friends grant her the resilience to navigate her needs. Reminiscent of Neil Gaiman’s Stardust, this is a clever, entertaining story with its own distinct identity.” ―Publishers Weekly

“As bright and magical as a falling star, Quintessence is a beautifully told story that collided with my heart and set it aglow.” ―Heather Kassner, author of The Bone Garden 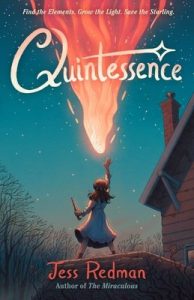 ALL BOOKS PURCHASED FROM US WILL BE SIGNED

& CAN BE PERSONALIZED BY REQUEST

Jess Redman is the author of The Miraculous, which Kirkus called “layered, engaging, and emotionally true” in a starred review and Quintessence, which comes out July 28, 2020. She is a former therapist and currently lives in Florida with her husband, two young children, and an old cat named SoulPie. Visit her at jessredman.com.

Natalie Lloyd is the New York Times Bestselling author of novels for young readers. Her first novel, A Snicker of Magic, was an ALA Notable Book, a New York Times Book Review Editors’ Choice, a top 10 Kids Indie Next Pick and an NPR, iBooks and Parents Magazine best book of the year for children. The book has been optioned for television by Sony Tristar. Natalie’s other novels include The Key to Extraordinary (Scholastic 2016), The Problim Children series (HarperCollins/Katherine Tegen 2017), and Over the Moon (Scholastic 2019), and Silverswift (an Audible original). These novels have won accolades from Entertainment Weekly, Junior Library Guild, SIBA, Amazon and Bank Street College of Education, among others. Natalie writes in the shadows beside a sunny window in Chattanooga, Tennessee. She loves adventuring with her husband, Justin, and their dogs.

Mystery and mayhem abound in the final book in New York Times bestselling author Natalie Lloyd’s middle grade series, as the Problim siblings board a pirate ship to rescue their missing Mama and baby brother from the villainous Cheesebreath.

Problim Children to the rescue! Sal and his siblings follow a trail of Toot’s toots as they sail through the barrier islands to rescue their baby brother from the evil Cheesebreath. He’s been holding Toot and Mama Problim hostage in the hopes that the Problims will lead him to their granddaddy’s treacherous treasure. But not all treasure is gold, and this one was buried long-ago for good reason.

Can the Problims find Mama, rescue their brother, and destroy the treasure before Cheesebreath and their nasty neighbor Desdemona capture them all?

Bursting with adventure, mystery, humor, and heart, the final book in Natalie Lloyd’s series is an affectionate ode to the wonders of being a weird kid in a weird family. 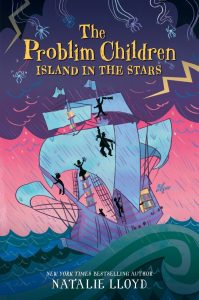