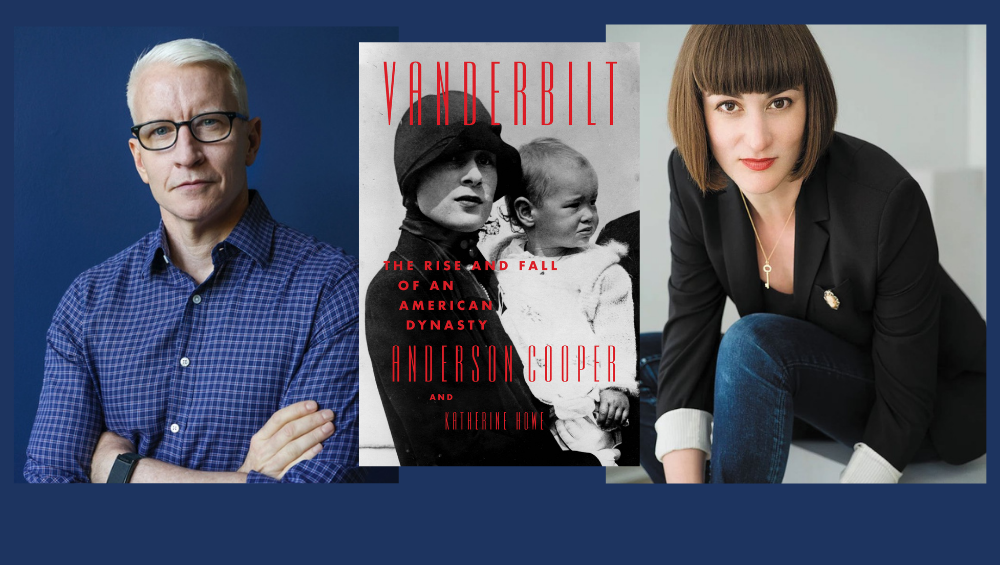 Vanderbilt: A Virtual Evening with Anderson Cooper and Katherine Howe

An Exclusive Virtual Evening and Book Launch with

In Conversation with Katherine Howe

Vanderbilt: The Rise and Fall of an American Dynasty

Tickets + a copy of Vanderbilt: The Rise and Fall of an American Dynasty are available for $30 + tax/fee + shipping. 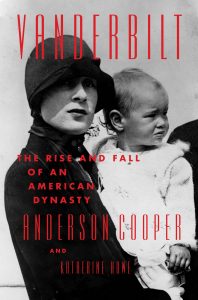 Few names are as synonymous with wealth and glamour as “Vanderbilt.”

When Cornelius Vanderbilt, the teenaged son of a ferryman who worked in New York Harbor, decided to go into business on his own, few would have believed that within six decades he would come to epitomize American business, magnate of a shipping and railroad empire that made him the richest man in the country.

In the wake of his death in 1877, Cornelius’s heirs bitterly fought over his estate, sowing familial discord that would last for decades. For the generations of Vanderbilts who followed, fortunes were lost and made and lost again. In this tide of success and failure, a particularly American excess displayed itself. By 2019, when the last Vanderbilt left the Breakers— the estate in Newport, Rhode Island, his son and namesake Cornelius Vanderbilt II built—the family would most likely have been unrecognizable to the Commodore.

Now, the Commodore’s great-great-great-grandson, Anderson Cooper, tells the story of his legendary family and their remarkable influence. Working with historian and novelist Katherine Howe, Cooper breathes life into the ancestors who built the family’s empire, doubled the Commodore’s wealth, hosted lavish galas, and became synonymous with American capitalism and high society. Moving from Staten Island to the drawing rooms of Fifth Avenue, the ornate cottages of Newport to Europe, Cooper and Howe wryly recount the family’s triumphs and tragedies and reflect on the social mores they observed, flouted, and shaped.

Drawing on never-before-seen documents and told from a unique insider’s viewpoint, this is a rollicking, quintessentially American history as remarkable as the family it so vividly captures.

Anderson Cooper joined CNN in 2001 and has hosted his own program, Anderson Cooper 360°, since March 2003. From September 2011 to May 2013, he also served as host of the daytime talk show, Anderson Live. Prior to CNN, he worked for ABC News and Channel One News. Cooper has won several awards, including a National Headliners Award, a Peabody Award, and five Emmy Awards. He graduated from Yale University in 1989 with a B.A. in political science and studied Vietnamese at the University of Hanoi.

Katherine Howe is a novelist and historian of America. She holds a BA in art history and philosophy from Columbia and an MA in American and New England Studies from Boston University, where she also did doctoral work. She is the author of the New York Times bestsellers The Physick Book of Deliverance Dane and The House of Velvet and Glass, as well as the young adult novels Conversion and The Appearance of Annie van Sinderen. She served as editor of The Penguin Book of Witches. She has appeared on NPR, National Geographic, Smithsonian TV, the Travel Channel, and Good Morning America. She lives with her family in New England and New York City.

Once you make your purchase, we will send you a unique link and to access the event on zoom webinar. See below for detailed information on tickets.

Tier 1: U.S GA ($30 + tax, fees and U.S. shipping): The purchase of this ticket includes (1) one copy of Vanderbilt(HarperCollins) and admits (1) one person into the virtual conversation. Please note that a fee of $6 is included for U.S. domestic shipping of the book.

Tier 2: International GA ($30 + tax, fees and shipping): The purchase of this ticket includes access to the virtual conversation as well as one (1) copy of the book, anderbilt(HarperCollins).

**Please Note: This option includes a flat rate international shipping fee of $25 USD for all overseas orders. If you purchase a different ticket tier and are located outside of the U.S. you will be contacted to pay the shipping difference.