No one worships the Sunshine State as much as Serge A. Storms. Perpetually hunting Floridian arcana and lore, he and his permanently baked sidekick, Coleman, are on the road again. This time they’re on a frenzied literary pilgrimage that leads them back to Riviera Beach, the cozy seaside town where the boys spent their formative years.

Growing up, Serge was enthralled by the Legend of Riviera Beach, aka Darby, a welder at the port who surfed the local waves long before the hot spots were hot. A god on the water, the big-hearted surfer was a friend to everyone—the younger surfers, cops, politicians, wealthy businessmen and ordinary Joes—a generosity of spirit that earned him the admiration of all. Meanwhile, there was a much murkier legend that made the rounds of the schoolyards from Serge’s youth—that of the crazy hermit living in a makeshift jungle compound farther up the mysterious Loxahatchee River than anyone dared to venture.

Then Serge moved away. But never forgot.

Now he’s back, with those legends looming larger than ever in the rearview mirror of his memory. As his literary odyssey moves north from Key West, closer and closer to his old stomping grounds, Serge digs into the past as only Serge can. Along the way, he unintentionally disturbs some long-forgotten ground, attracting the attention of a cast of villains that only Florida can produce.

As the body count grows, so does the list of questions:

Told in alternating flashbacks between Serge and Coleman’s childhoods and the present day, The Pope of Palm Beach is a witty and deliciously violent delight from the twisted imagination of Tim Dorsey.

Tim Dorsey was a reporter and editor for the Tampa Tribune from 1987 to 1999 and is the author of ten previous novels: Florida Roadkill, Hammerhead Ranch Motel, Orange Crush, Triggerfish Twist, The Stingray Shuffle, Cadillac Beach, Torpedo Juice, The Big Bamboo, Hurricane Punch, and Atomic Lobster. He lives in Tampa, Florida. 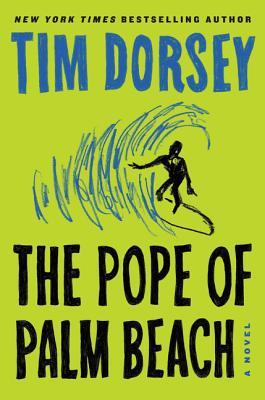