The Window Seat: An Evening with Aminatta Forna and John Freeman

An Evening with Aminatta Forna

In conversation with John Freeman

Aminatta Forna is one of our most important literary voices, and her novels have won the Windham Campbell Prize and the Commonwealth Writers’ Prize for Best Book. In this elegantly rendered and wide-ranging collection of new and previously published essays, Forna writes intimately about displacement, trauma and memory, love, and how we coexist and encroach on the non-human world.

Movement is a constant here. In the title piece, “The Window Seat,” she reveals the unexpected enchantments of commercial air travel. In “Obama and the Renaissance Generation,” she documents how, despite the narrative of Obama’s exceptionalism, his father, like her own, was one of a generation of gifted young Africans who came to the United Kingdom and the United States for education and were expected to build their home countries anew after colonialism. In “The Last Vet,” time spent shadowing Dr. Jalloh, the only veterinarian in Sierra Leone, as he works with the street dogs of Freetown, becomes a meditation on what a society’s treatment of animals tells us about its principles. In “Crossroads,” she examines race in America from an African perspective, and in “Power Walking” she describes what it means to walk in the world in a Black woman’s body and in “The Watch” she explores the raptures of sleep and sleeplessness the world over.

Deeply meditative and written with a wry humor, The Window Seat confirms that Forna is a vital voice in international letters. 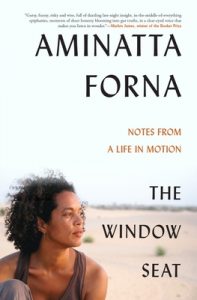 Aminatta Forna is the author of the novels Ancestor Stones, The Memory of Love, The Hired Man, and Happiness, as well as the memoir The Devil That Danced on the Water. Forna’s books have been translated into twenty two languages. Her essays have appeared in Brick, Freeman’s, Granta, The Guardian, Kenyon Review, Literary Hub, The New York Review of Books Daily, The Observer, and Vogue. She is currently Director and Lannan Foundation Chair of Poetics at Lannan Center for Poetrics and Social Practice at Georgetown University.

John Freeman is the founder of the literary annual Freeman‘s and the author and editor of ten books, including Dictionary of the Undoing, The Park, Tales of Two Planets, The Penguin Book of the Modern American Short Story, and, with Tracy K. Smith, There’s a Revolution Outside My Love. His work has appeared in The New Yorker, The Paris Review and Orion, and been translated into over twenty languages. The former editor of Granta, he lives in New York City, where he teaches writing at NYU and is an executive editor at Alfred A. Knopf.

In partnership with Scottish Government USA