The Tiger and the Cage: A Virtual Evening with Emma Bolden and Chantel Acevedo

A Virtual Evening with Emma Bolden

The Tiger and the Cage: A Memoir of a Body in Crisis

For readers of Susannah Cahalan’s Brain on Fire and Porochista Khakpour’s Sick, this exquisitely wrought debut memoir recounts a lifelong struggle with chronic pain and endometriosis, while speaking more broadly to anyone who’s been told “it’s all in your head”

In Catholic grade school, Emma Bolden has a strange experience with a teacher that unleashes a short-lived, persistent coughing spell—something the medical establishment will later use against her as she struggles through chronic pain and fainting spells that coincide with her menstrual cycle.

With The Tiger and the Cage, Bolden uses her own experience as the starting point for a journey through the institutional misogyny of Western medicine—from a history of labeling women “hysterical” and parading them as curiosities to a lack of information on causes or cures for endometriosis, despite more than a century of documented cases. Recounting botched surgeries and dire side effects from pharmaceuticals affecting her and countless others, Bolden speaks to the ways people are often failed by the official narratives of institutions meant to protect them.

Bolden also interrogates a narrative commonly imposed on menstruating bodies: the expected story arc of marriage and children. She interrogates her body as a painful site she must mentally escape and a countdown she hopes to beat by having a child before a hysterectomy. Only later does she find language and acceptance for her asexality and the life she needs to lead. Through all its gripping, devastating, and beautiful threads, The Tiger and the Cage says what Bolden and so many like her have needed to hear: I see you, and I believe you. 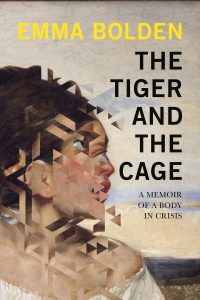 EMMA BOLDEN is the author of House Is an Enigma, medi(t)ations, and Maleficae. The recipient of a National Endowment for the Arts Literary Fellowship, her work has appeared in The Norton Introduction to Literature, The Best American Poetry, The Best Small Fictions, and journals including Mississippi Review, Seneca Review, StoryQuarterly, Prairie Schooner, TriQuarterly, and Shenandoah. She is the associate editor in chief for Tupelo Quarterly.

Called “a master storyteller” by Kirkus Reviews, CHANTEL ACEVEDO is the author of the novels  Love and Ghost Letters,  A Falling Star, The Distant Marvels, which was a finalist for the 2016 Andrew Carnegie Medal for Excellence in Fiction, and , The Living Infinite, hailed by Booklist as a “vivid and enthralling tale of love and redemption.” Muse Squad: The Cassandra Curse and Muse Squad: The Mystery of the Tenth, Acevedo’s new middle grade duology (called “Riveting and suspenseful” by School Library Journal) was published by Balzer + Bray. Her latest middle grade novel, THE CURSE ON SPECTACLE KEY, is a lightly spooky story set in the Florida Keys, coming September 6th, 2022. She is Professor of English at the University of Miami, where she directs the MFA program.