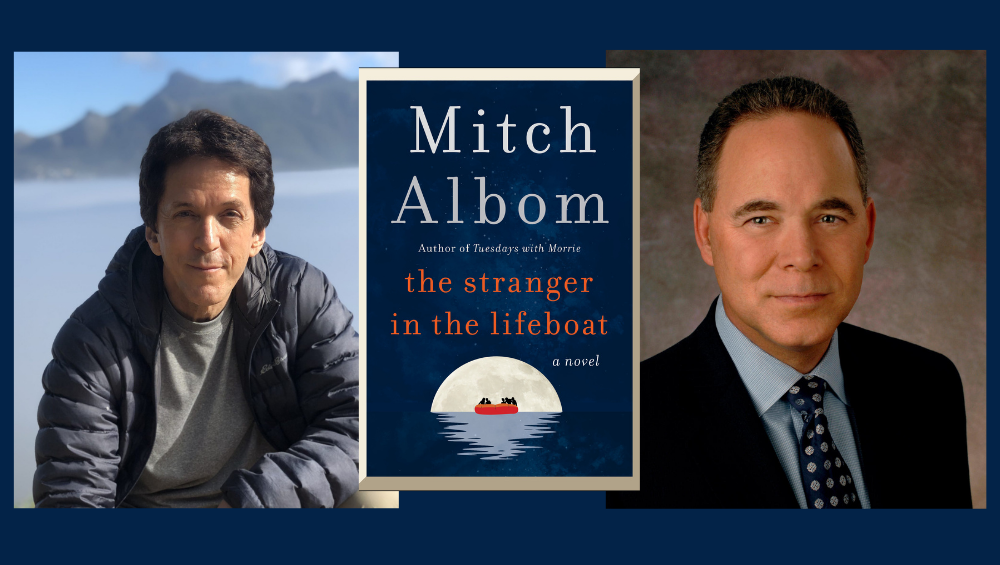 The Stranger in the Lifeboat: An Evening with Mitch Albom and Jim Axelrod

An Evening with Mitch Albom

In conversation with Jim Axelrod

The Stranger in the Lifeboat: A Novel

GET YOUR TICKET HERE 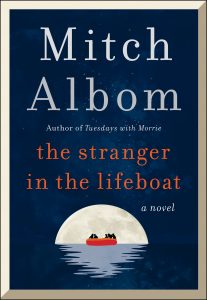 What would happen if we called on God for help and God actually appeared? In Mitch Albom’s profound new novel of hope and faith, a group of shipwrecked passengers pull a strange man from the sea. He claims to be “the Lord.” And he says he can only save them if they all believe in him.

Adrift in a raft after a deadly ship explosion, nine people struggle for survival at sea. Three days pass. Short on water, food and hope, they spot a man floating in the waves. They pull him in.

“Thank the Lord we found you,” a passenger says.

“I am the Lord,” the man whispers.

So begins Mitch Albom’s most beguiling and inspiring novel yet.

Albom has written of heaven in the celebrated number one bestsellers The Five People You Meet in Heaven and The First Phone Call from Heaven. Now, for the first time in his fiction, he ponders what we would do if, after crying out for divine help, God actually appeared before us? What might the Lord look, sound and act like?

In The Stranger in the Lifeboat, Albom keeps us guessing until the end: Is this strange and quiet man really who he claims to be? What actually happened to cause the explosion? Are the survivors already in heaven, or are they in hell?

The story is narrated by Benji, one of the passengers, who recounts the events in a notebook that is later discovered—a year later—when the empty life raft washes up on the island of Montserrat.

It falls to the island’s chief inspector, Jarty LeFleur, a man battling his own demons, to solve the mystery of what really happened.

A fast-paced, compelling novel that makes you ponder your deepest beliefs, The Stranger in the Lifeboat suggests that answers to our prayers may be found where we least expect them.

MITCH ALBOM is a bestselling author, screenwriter, playwright, broadcaster and nationally syndicated columnist. He has written seven number one New York Times bestsellers, and his books have collectively sold more than forty million copies in forty-seven languages worldwide. Tuesdays with Morrie, which spent four straight years atop the New York Times bestseller list, is now the bestselling memoir of all time. Albom has founded nine charities in his hometown of Detroit, and since 2010 has operated the Have Faith Haiti Orphanage in Port-au-Prince. Albom lives with his wife, Janine, in Michigan

JIM AXELROD is the chief investigative and senior national correspondent for CBS News, reporting for “CBS This Morning,” the “CBS Evening News,” “CBS Sunday Morning,”  and other CBS News broadcasts.

While at CBS News, Axelrod has covered a broad range of domestic and international stories, notably the war in Iraq and the American invasion of Afghanistan. In 2003, Axelrod was the first television journalist to report live from Baghdad’s Saddam International Airport immediately after it fell to U.S. troops. His live coverage of the U.S. Army firing artillery rounds into Iraqi positions was the first to be broadcast by a reporter embedded with ground troops engaged in combat in Iraq. Axelrod also covered the departure of U.S. troops from Iraq and was the last reporter to leave with the military in December 2011.

Axelrod’s investigative journalism has been honored with a Peabody Award for his series on West Virginia’s opioid addiction crisis, a George Polk Award for his work exposing a multi-billion dollar compounding pharmacy fraud, and an Edward R. Murrow award for his reporting on the genetic testing industry. He was also part of the CBS News team honored with a 2010 duPont-Columbia Silver Baton for “CBS Reports: Children of the Recession.” Axelrod also won Emmy awards in 2002, 2014, and 2016.

He and his wife, Christina, have three children and live in Montclair, N.J.

**Please Note: This option includes a flat rate international shipping fee of $30 USD for all overseas orders. Due to the pandemic, delivery timelines will vary. Please be advised that we cannot guarantee when you will receive the book, and we thank you for your understanding. International shipping via USPS does not guarantee delivery to the individual address, rather only to the country of destination.

Please note: Due to the pandemic the post office is being challenged by increased volume, staffing issues, and safety measures. Most orders within the U.S. deliver in about 10 business days from the date the book ships. International orders usually take longer and vary depending on the country of destination. Books & Books uses USPS for all shipments. International shipping via USPS does not guarantee delivery to the individual address, rather only to the country of destination. Thank you for your understanding. 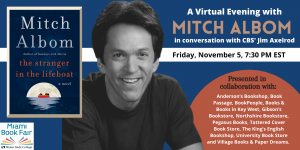