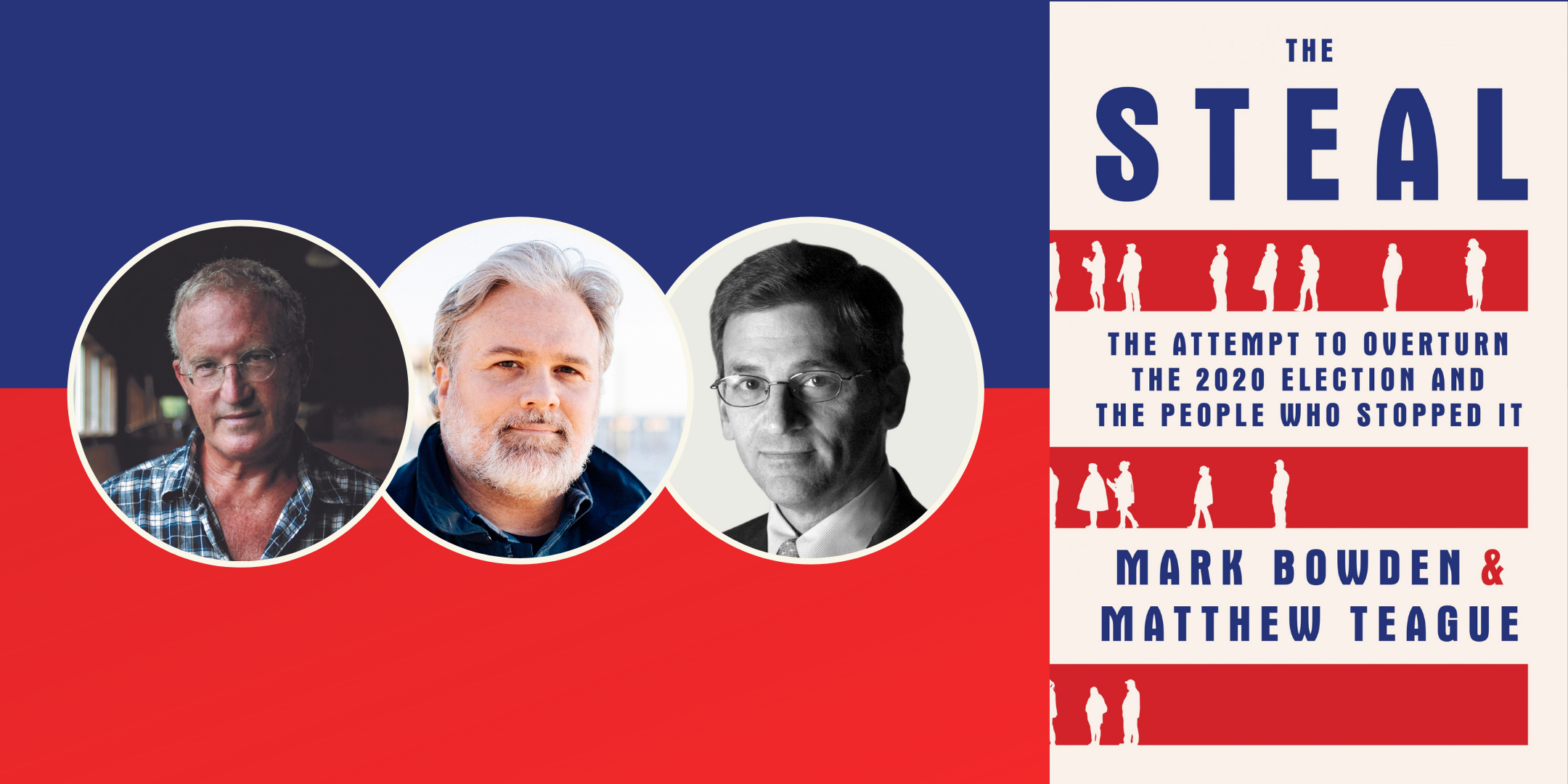 The Steal: A Virtual Evening with Mark Bowden, Matthew Teague and Peter Baker

Books & Books and indie bookstores across the country present…

In conversation with Peter Baker

The Steal: The Attempt to Overturn the 2020 Election and the People Who Stopped It

Books & Books is excited to partner with Politics and Prose, Harvard Book Store, A Cappella, Changing Hands, Midtown Scholar, Boswell Book Company, Book People, Literati and Pages for this special conversation with Mark Bowden and Matthew Teague! Tickets are $5  or bundled with the book (+tax/fee). 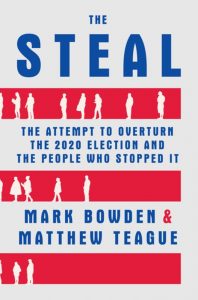 In The Steal, veteran journalists Mark Bowden and Matthew Teague offer a week-by-week, state-by-state account of the effort to overturn the 2020 presidential election.

In the sixty-four days between November 3 and January 6, President Donald Trump and his allies fought to reverse the outcome of the vote. Focusing on six states–Arizona, Georgia, Michigan, Nevada, Pennsylvania, and Wisconsin– Trump’s supporters claimed widespread voter fraud. It was not a well-orchestrated matter. There was no guiding genius pulling the strings in key states for the defeated Donald Trump. In the weeks after the election, in counties and precincts all over the country, many local Republican officials and even Trump’s own campaign workers washed their hands of his increasingly unhinged allegations of fraud. But there was no shortage of people willing to take up the fight. Urged on by Trump and his coterie of advocates, lawyers, and media propagandists, true believers turned on their colleagues, friends, and neighbors– even those in their own party–to accuse them of rigging the election. The real story of the insurrection began months before Trump’s mob attacked the US Capitol on January 6, 2021. That riot was the desperate final act, emblematic of the clumsy, failed movement Trump had been building for years. It began in cities and small towns all over America on election day, November 3, 2020. Working with a team of researchers and reporters, Bowden and Teague uncover never-before-told accounts from the election officials fighting to do their jobs amid outlandish claims and threats to themselves, their colleagues, and their families. The Steal is an engaging, in-depth report on what happened during those crucial nine weeks and a portrait of the heroic individuals who did their duty and stood firm against the unprecedented, sustained attack on our election system to ensure that every legal vote was counted and the will of the people prevailed.

Mark Bowden is the author of fifteen books, including the #1 New York Times bestseller Black Hawk Down. He reported at the Philadelphia Inquirer for twenty years and now writes for The Atlantic and other magazines.

Matthew Teague is a contributor to National Geographic, The Atlantic, Esquire, and other magazines, and executive producer of Our Friend, a feature film that premiered in 2021.

Peter Baker is the chief White House correspondent for The New York Times, a political analyst for MSNBC, and author of Days of Fire and The Breach.

Tier 1: U.S. GA (Includes book + U.S shipping): The purchase of this ticket admits (1) one person into the virtual event and includes (1) one copy of The Steal (Atlantic Monthly Press, $28 + tax and fee). Please note that a fee of $6 is included for U.S. domestic shipping of the book.

Tier 2: U.S. GA (No book): The purchase of this ticket admits (1) one person into the virtual event.