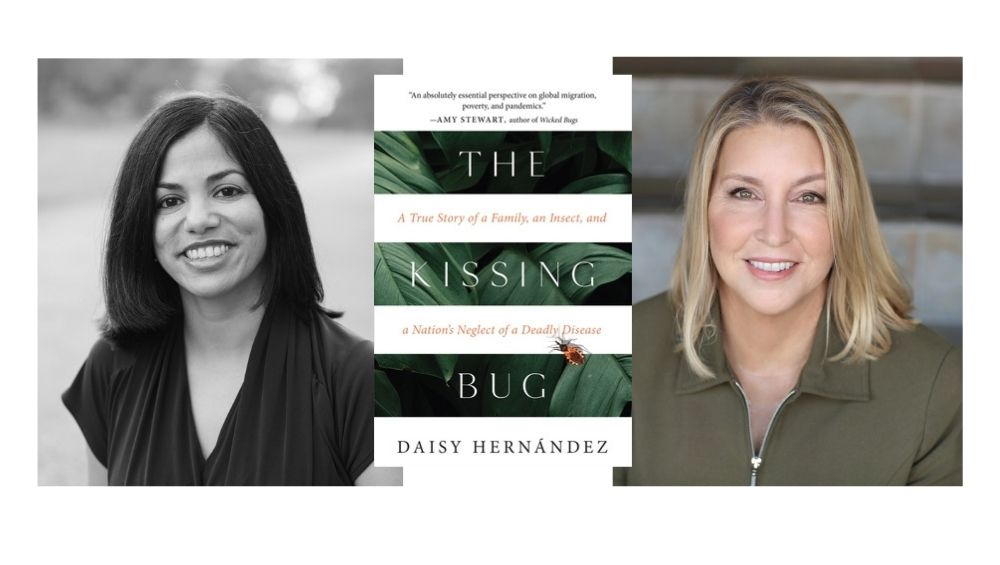 The Kissing Bug: An Evening with Daisy Hernández and Kris Newby

An Evening with Daisy Hernández

In conversation with Kris Newby

The Kissing Bug: A True Story of a Family, an Insect, and a Nation’s Neglect of a Deadly Disease

Growing up in a New Jersey factory town in the 1980s, Daisy Hernández believed that her aunt had become deathly ill from eating an apple. No one in her family, in either the United States or Colombia, spoke of infectious diseases. Even into her thirties, she only knew that her aunt had died of Chagas, a rare and devastating illness that affects the heart and digestive system. But as Hernández dug deeper, she discovered that Chagas—or the kissing bug disease—is more prevalent in the United States than the Zika virus.

After her aunt’s death, Hernández began searching for answers. Crisscrossing the country, she interviewed patients, doctors, epidemiologists, and even veterinarians with the Department of Defense. She learned that in the United States more than three hundred thousand people in the Latinx community have Chagas, and that outside of Latin America, this is the only country with the native insects—the “kissing bugs”—that carry the Chagas parasite.

Through unsparing, gripping, and humane portraits, Hernández chronicles a story vast in scope and urgent in its implications, exposing how poverty, racism, and public policies have conspired to keep this disease hidden. A riveting and nuanced investigation into racial politics and for-profit healthcare in the United States, The Kissing Bug reveals the intimate history of a marginalized disease and connects us to the lives at the center of it all. Daisy Hernández is a former reporter for The New York Times and has been writing about the intersections of race, immigration, class, and sexuality for almost two decades. She has written for National Geographic, NPR’s All Things Considered and Code Switch, The Atlantic, Slate, and Guernica, and she’s the former editor of Colorlines, a newsmagazine on race and politics. Hernández is the author of the award-winning memoir A Cup of Water Under My Bed and co-editor of Colonize This! Young Women of Color on Today’s Feminism. She is an associate professor at Miami University in Ohio.

Kris Newby is an award-winning science/technology writer and the senior producer of the Lyme disease documentary UNDER OUR SKIN, which premiered at the Tribeca Film Festival and was a 2010 Oscar semifinalist. Her book BITTEN won a 2019 Silver Nautilus Book Award in Journalism and Investigative Reporting, and the top 2020 International Book Award for narrative nonfiction.