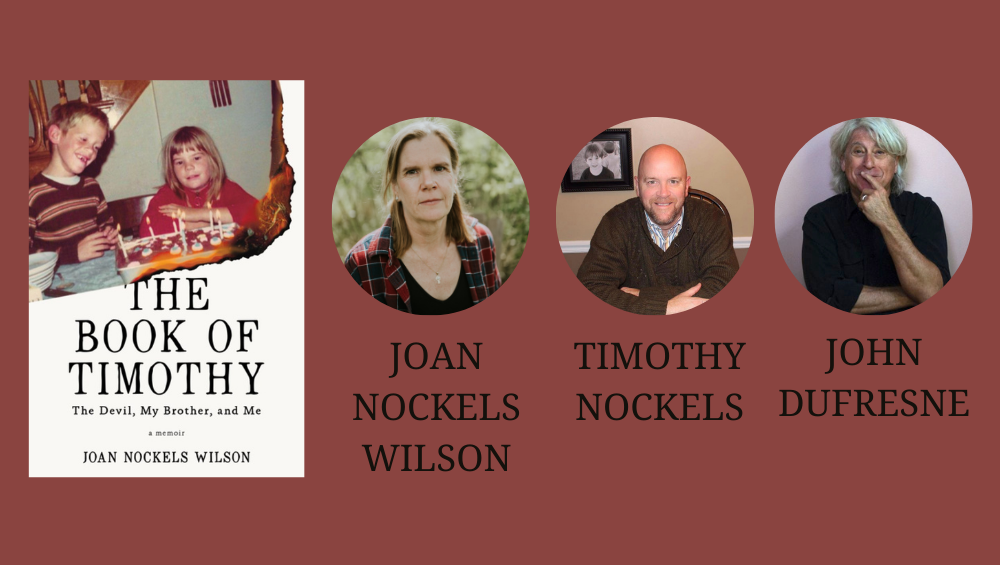 The Book of Timothy: A Virtual Evening with Joan Nockels Wilson, Timothy Nockels and John Dufresne

A Virtual Evening with Joan Nockels Wilson and Timothy Nockels

The Book of Timothy: The Devil, My Brother, and Me 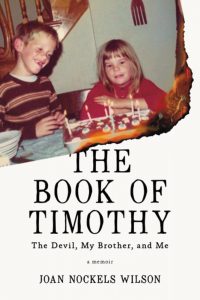 Set in Rome, Chicago, and Anchorage, and spanning thirty years from crime to confrontation, The Book of Timothy: The Devil, My Brother, and Me recounts in lyric movements a sister’s journey, partly through trickery, but eventually through truth, to gain a long-absent admission from the priest who abused her brother. While on that journey, Nockels Wilson, a former prosecutor, confronts not only the priest, but her personal quest for vengeance. She further seeks an understanding of how the first Book of Timothy, the work of St. Paul, contributed to the silencing of women in her once loved Catholic Church. This Book of Timothy promises to take the reader on a quest for justice and down a path of unexpected coincidences that ends where it first began: out of a great love for a brother and in the power of first memory.

Joan Nockels Wilson is a writer and lawyer. A native of Chicago and a forever-learner, she has studied at Northwestern University, University of California Berkeley, Lewis and Clark College, and the University of Alaska. In addition to her law degree, she holds a Master’s of Fine Arts in creative nonfiction, is a Rasmuson Foundation Individual Artist award winner, and is a member of the Bread Loaf community of writers. Her work has appeared in literary journals and audio shows, most recently Cirque and Arctic Entries. Joan has practiced as a civil and criminal litigator in Alaska for twenty-five years. She currently serves as a Senior Assistant Attorney General for the State of Alaska.  She lives with her husband, daughter, and a vizsla named Vivian in Anchorage, Alaska. This is her first book.  www.joannockelswilson.com

Timothy Nockels was the first of Father John Baptist Ormechea’s victims to come forward and the only one to do so publicly. Thanks to his bravery, at least seven more victims followed. Shortly after completion of an investigation of Tim’s and other victims’ charges by the Cook County State’s Attorney, who deemed all allegations credible, Father Ormechea was removed from public ministry. The Book of Timothy: The Devil, My Brother, and Me is the collective product of Tim and his sister — Tim had to live it. Joan had to write it — that began with a promise to bring accountability to Ormechea, the Archdiocese of Chicago, and the Passionist religious order.  Timothy Nockels has worked in financial futures for 32 years, working his way up from floor runner at the Chicago Board of Trade to his current status as President and Owner of Pure Soul, Inc. where he advises Morgan Stanley on the pricing and execution of Euro Dollar options and trades at the Chicago Mercantile Exchange. Tim also serves as President and program leader of the Special Recreation Association of Central Lake County Foundation which provides athletic, theatrical, and equine therapeutic services to children and adults with autism and Down Syndrome. Known as Coach Tim, he was awarded “He’s the Best Dad,” by his town’s local newspaper. Tim and his wife Lisa reside in Vernon Hills, Illinois with their two teenage boys.

John Dufresne is the author of six novels: Louisiana Power & Light, Love Warps the Mind a Little, (both New York Times Notable Books of the Year) Deep in the Shade of Paradise, Requiem, Mass., No Regrets, Coyote, and I Don’t Like Where This Is Going.  He also wrote two short story collections: The Way That Water Enters Stone and Johnny Too Bad, as well as three chapbooks: Lethe, Cupid, Time and Love; Well Enough Alone; and I Will Eat a Piece of the Roof and You Can Eat the Window. He has two books on writing and creativity: The Lie That Tells a Truth: a Guide to Writing Fiction and Is Life Like This?: a Guide to Writing Your First Novel in Six Months. John was one of the thirteen authors of the mystery novel, Naked Came the Manatee. His short story “The Timing of Unfelt Smiles” was included in Miami Noir and in Best American Mystery Stories 2007. Another short story, “The Cross-Eyed Bear,” was included in Boston Noir and Best American Mystery Stories 2010. John wrote a full-length play, Trailerville, which was produced at the Blue Heron Theatre in New York in 2005. He also wrote the screenplay for the award-winning short film The Freezer Jesus. He co-wrote the screenplay for To Live and Die in Dixie with Don Papy. John was a 2012-13 Guggenheim Fellow and teaches in the MFA program at Florida International University in Miami.