The Adventure Is Now: A Virtual Event with Jess Redman and Jaimie Schider-Heisel

A Virtual Event with Jess Redman

In conversation with Jaimie Schider-Heisel

The Adventure Is Now

TUNE IN HERE FOR FREE

A fun-filled, action-packed middle grade novel about a boy who learns about protecting the environment, finding real friends, and living in the now while spending the summer on a remote island.

Sometimes it’s hard to be Milton P. Greene. He says all the wrong things, his family is falling apart, and everyone at school avoids him because of the very embarrassing Bird Brain Incident. But when Milton plays his video game Isle of Wild, he becomes someone else—Sea Hawk, the brave and brilliant naturalist explorer who conquers danger at every turn.

Then Milton’s parents ship him off to the remote Lone Island for the summer, where his uncle Evan is an environmentalist researcher. The island is chock-full of spectaculous species, and Milton realizes this is his chance to become the brave and brilliant naturalist he’s always wanted to be—and even meet some fellow explorers!

But as it turns out, the future of the Lone Island is in some pretty serious peril, and the only thing that can save it is a field guide full of cryptic clues. If Milton and his unexpected new friends are going to protect the island, they’ll have to trust each other, discover new truths, and embark on a wild and wondrous adventure all their own.

The Adventure is Now is a dazzling, fun-filled story from Jess Redman. 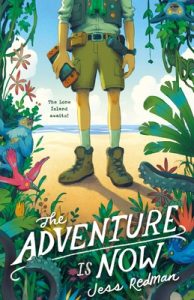 Jess Redman is a therapist and author of books for young readers with FSG/Macmillan. Her first book, The Miraculous, was a Bank Street Best Children’s Book of 2019, an Amazon Best Book of 2019, and was called “layered, engaging, and emotionally true” in a Kirkus starred review. Her second book, Quintessence, was an NCTE Charlotte Huck Honor Book. Her third book, The Adventure Is Now, is scheduled for publication on May 4, 2021, and has been described by BCCB as “a Roald Dahl-esque delight.” Redman currently lives in Florida with her husband, two young children, an old cat named SoulPie, and a fish named Annie. Visit her at www.jessredman.com or on Twitter and Instagram at @Jess__Red.

Jaimie Schider-Heisel has been an active volunteer with the Palm Beach County chapter of the Surfrider Foundation since 2011, and is passionate about solving our plastic addiction problem. Jaimie’s most recent campaign as chair of the chapter was to obtain a polystyrene ordinance in all cities in Palm Beach County. As of April 20th, her efforts will have paid off, as the Boynton Beach City Commission is expected to pass a ban on polystyrene foam/plastic, balloons and confetti on all city property! When she is not fighting to protect the environment, you will find her designing graphics and websites, and reading Jess Redman’s books!