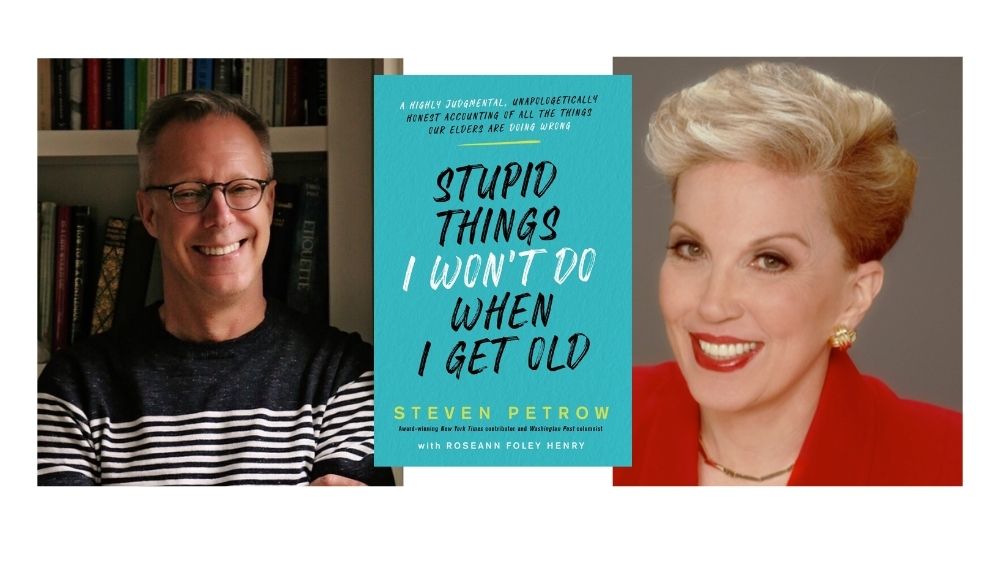 Stupid Things I Won’t Do When I Get Old: An Evening with Steven Petrow and Jeanne Phillips

An Evening with Steven Petrow

In conversation with Jeanne Phillips

Stupid Things I Won’t Do When I Get Old: A Highly Judgmental, Unapologetically Honest Accounting of All the Things Our Elders Are Doing Wrong

For fans of David Sedaris and Nora Ephron, a humorous, irreverent, and poignant look at the gifts, stereotypes, and inevitable challenges of aging, based on award-winning journalist Steven Petrow’s wildly popular New York Times essay, “Things I’ll Do Differently When I Get Old.”

Soon after his 50th birthday, Petrow began assembling a list of “things I won’t do when I get old”—mostly a catalog of all the things he thought his then 70-something year old parents were doing wrong. That list, which included “You won’t have to shout at me that I’m deaf,” and “I won’t blame the family dog for my incontinence,” became the basis of this rousing collection of do’s and don’ts, wills and won’ts that is equal parts hilarious, honest, and practical.

The fact is, we don’t want to age the way previous generations did. “Old people” hoard. They bore relatives—and strangers alike—with tales of their aches and pains. They insist on driving long after they’ve become a danger to others (and themselves). They eat dinner at 4pm. They swear they don’t need a cane or walker (and guess what happens next). They never, ever apologize. But there is another way…

In Stupid Things I Won’t Do When I Get Old, Petrow candidly addresses the fears, frustrations, and stereotypes that accompany aging. He offers a blueprint for the new old age, and an understanding that aging and illness are not the same. As he writes, “I meant the list to serve as a pointed reminder—to me—to make different choices when I eventually cross the threshold to ‘old.’”

Getting older is a privilege. This essential guide reveals how to do it with grace, wisdom, humor, and hope. And without hoarding. 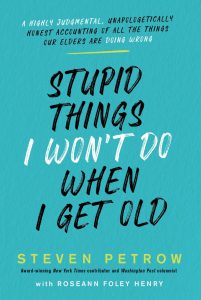 Steven Petrow is an award-winning journalist and author best known for his Washington Post and New York Times essays on aging, health, and civility. He’s currently an opinion columnist covering manners and civil discourse for USA Today, and his 2019 TED Talk, “3 Ways to Practice Civility” has been viewed nearly two million times and translated into 16 languages. Formerly the host and executive producer of “The Civilist,” a podcast from Public Radio International and North Carolina Public Radio WUNC, Steven regularly appears on television and radio. He’s the author of six books, including Steven Petrow’s Complete Gay & Lesbian Manners and Stupid Things I Won’t Do When I Get Old. A former president of NLGJA: The Association of LGBTQ Journalists, Steven is the recipient of numerous awards and grants, including those from the National Endowment for the Humanities, the Smithsonian Institution, the Ucross Foundation, the Virginia Center for the Creative Arts, and the National Press Foundation. In 2017, he became the named sponsor of the Steven Petrow LGBTQ Fellowship at the VCCA, a prize that is awarded annually. Steven lives in Hillsborough, N.C. with his cocker spaniel, Binx Bolling. Please visit him online at StevenPetrow.com.

Dear Abby is written by Abigail Van Buren, also known as Jeanne Phillips, whose career as an advice columnist began early. When Jeanne was 14 and needed a little extra spending money, her mother asked, “How do you intend to earn it?” Her mother, Pauline Phillips, had more in mind than the usual household chores. She had recently started writing a nationally syndicated advice column under the pseudonym Abigail Van Buren. A deal was struck, beginning a lifelong partnership.

As she helped her mother answer incoming letters from advice-seeking teens, Phillips discovered that she truly loved the work. She wrote for the column behind the scenes until December 2000, when Pauline Phillips recognized Jeanne Phillips as co-creator of Dear Abby and officially retired.

Today, Phillips dispenses advice, offers comfort (or a reality check) and settles disputes with the same mix of wit and wisdom that endeared her mother to millions of readers and turned Dear Abby into a cultural icon. The times have changed, but Dear Abby’s appeal hasn’t. Nor have the issues and irritations that fill Phillips’ mailbox and inbox.