Squeeze Me: An Evening with Carl Hiaasen and Dave Barry

An Evening with Carl Hiaasen

In conversation with Dave Barry

From the author of Skinny Dip and Razor Girl, a hilarious, New York Times best-selling novel of social and political intrigues, set against the glittering backdrop of Florida’s gold coast.

At the height of Palm Beach’s charity ball season, Kiki Pew Fitzsimmons, a prominent member of geriatric high society, suddenly vanishes during a swank gala. Kiki Pew was a founding member of the Potussies, a group of women dedicated to supporting the President, who spends half the year at the “Winter White House” just down the road. Meanwhile, Angie Armstrong, wildlife wrangler extraordinaire, is called to the island to deal with a monster-sized Burmese python that has taken residency in a tree. But the President is focused on the disappearance of Kiki Pew. Never one to miss an opportunity to play to his base, he immediately declares her a victim of rampaging immigrant hordes. This, it turns out, is far from the truth, which now lies in the middle of the road, where a bizarre discovery brings the First Lady’s motorcade to a grinding halt. . . . Irreverent, ingenious, and uproariously entertaining, Squeeze Me perfectly captures the absurdity of our times.

The paperback edition of Squeeze Me includes a new epilogue by the author! 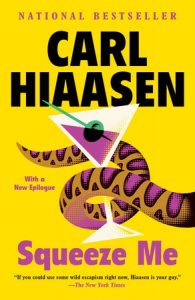 CARL HIAASENwas born and raised in Florida. He is the author of fourteen previous novels, including the best sellers Bad Monkey, Lucky You, Nature Girl, Razor Girl, Sick Puppy, Skinny Dip, and Star Island, as well as six best-selling children’s books, Hoot, Flush, Scat, Chomp, Skink, and Squirm. His most recent work of fiction is Squeeze Me.

Dave Barry is the author of more bestsellers than you can count on two hands, including Lessons From Lucy, Dave Barry’s Complete Guide to Guys, Dave Barry Turns 40, and Dave Barry Is Not Making This Up. A wildly popular syndicated columnist best known for his booger jokes, Barry won the 1988 Pulitzer Prize for commentary. He lives in Miami.