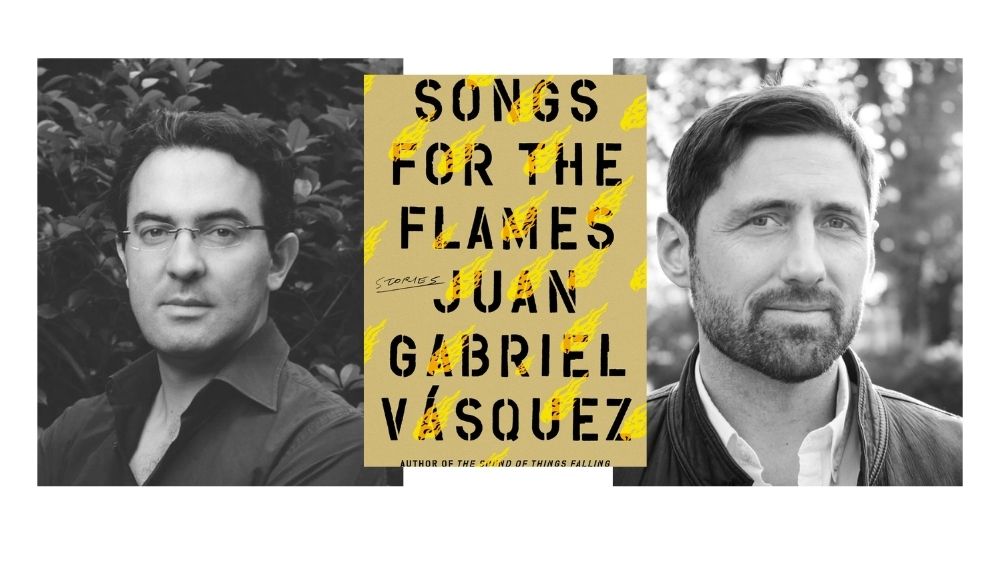 Songs for the Flames: An Afternoon with Juan Gabriel Vásquez and Phil Klay

An Afternoon with Juan Gabriel Vásquez

In conversation with Phil Klay

Songs for the Flames: Stories

The characters in Songs for the Flames are men and women touched by violence—sometimes directly, sometimes only in passing—but whose lives are changed forever, consumed by fire and by unexpected encounters and unyielding forces.

A photographer becomes obsessed with the traumatic past that an elegant woman, a fellow guest staying at a countryside ranch, would rather leave behind. A military reunion forces a soldier to confront a troubling history, both personal and on a larger scale. And in a tour-de-force piece, the search for a book leads a writer to the fascinating story of why a woman is buried next to a graveyard, rather than in it—and the remarkable account of her journey from France to Colombia as a child orphan.

Juan Gabriel Vásquez returns to stories with these nine morally complex tales, fresh proof of his narrative versatility and his profound understanding of the lives of others. There’s a romantic wistfulness that combusts with the realities of dangerous histories, both personal and political, to throw these characters into the flames from which they either emerge purified, reborn, or burned and destroyed. Winner of several of the world’s most prestigious fiction prizes—including the International IMPAC Dublin Literary Award, Spain’s Alfaguara Novel Prize, France’s Roger Caillois Award, Portugal’s Premio Casino da Póvoa, and Italy’s Premio von Rezzori—and published in twenty-eight languages, Juan Gabriel Vásquez is one of the most celebrated writers alive today. The English language publication of The Sound of Things Falling was an instant bestseller and earned enormous critical acclaim, putting him on the literary map in the United States. Juan’s next novel, Reputations, firmly established him as “one of the finest writers of our time” (San Francisco Chronicle), and after the release of The Shape of the Ruins in 2018 The Economist called him “the most famous novelist to come out of Colombia since Gabriel García Márquez.”

Phil Klay is a veteran of the US Marine Corps and the author of Redeployment, which won the 2014 National Book Award for Fiction, and Missionaries, which was named one of the Ten Best Books of 2020 by the Wall Street Journal. His writing has appeared in The New York Times, The Washington Post, The Wall Street Journal, The Atlantic, and elsewhere. He currently teaches fiction at Fairfield University, and is a Board member for Arts in the Armed Forces.