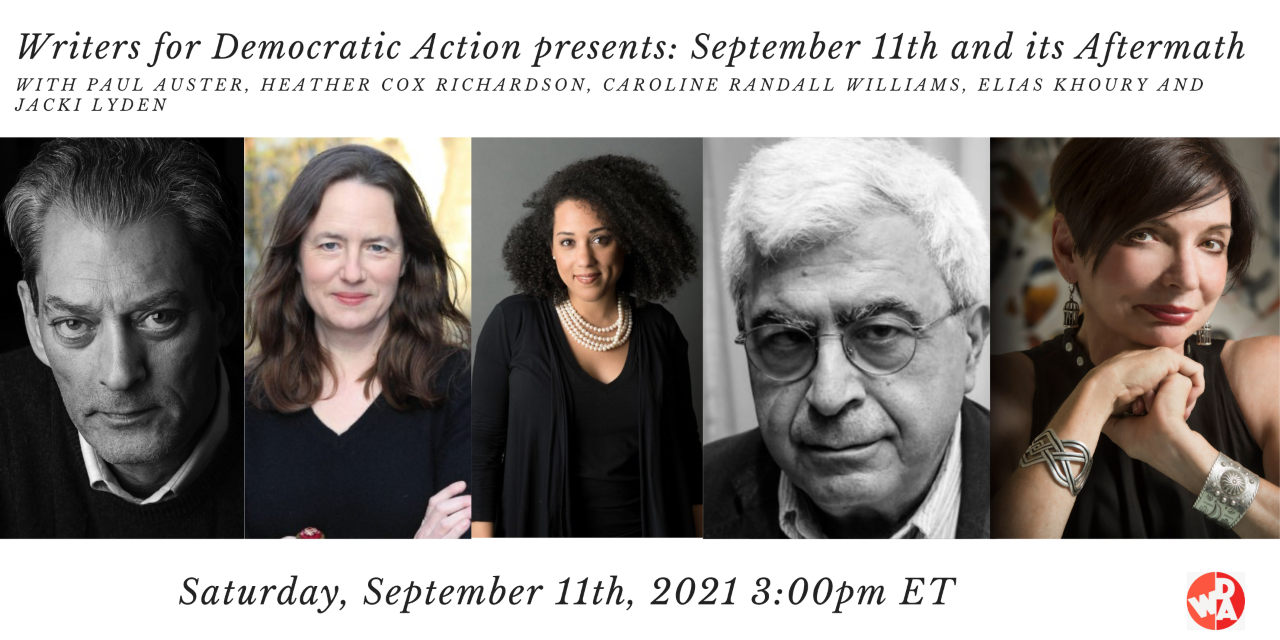 September 11th and its Aftermath

On the twentieth anniversary of the al Qaeda assaults, WDA will present a distinguished panel of writers to consider what America’s immediate and long-term response to 9/11 has meant for the US and for the world. What effects linger in our global present tense? How might we use the history of 9/11 to direct our action in defense of democracy? Discussing these questions will be the poet Caroline Randall Williams; the novelist Paul Auster; the Lebanese novelist Elias Khoury; and the historian Heather Cox Richardson. Moderated by the journalist and memoirist Jacki Lyden. Hosted by WDA founding member Todd Gitlin

Heather Cox Richardson is an American historian and professor of history at Boston College, where she teaches courses on the American Civil War, the Reconstruction Era, the American West, and the Plains Indians. She previously taught history at MIT and the University of Massachusetts Amherst.

Richardson has authored six books on history and politics. She is a founder and editor at werehistory.org, which presents professional history to a public audience through short articles. Between 2017 and 2018, she co-hosted the NPR podcast Freak Out and Carry On. Most recently, Richardson started publishing “Letters from an American”, a nightly newsletter that chronicles current events in the larger context of American history. The newsletter accrued tens of thousands of subscribers making her, as of December 2020, the most successful individual author of a paid publication on Substack.

Elias Khoury is a Lebanese novelist, and prominent public intellectual. Accordingly, he has published myriad novels related to literary criticism, which have been translated into several foreign languages, including English. Khoury has also written three plays and two screenplays. Khoury has been an editor of famous Lebanese newspapers. Between 1993 and 2009, he served as an editor of Al-Mulhaq, the weekly cultural supplement of the Lebanese daily newspaper Al-Nahar. He also taught in important universities in the United States, as well as in Arab and European countries.

Jacki Lyden is an American journalist and author of the memoir, Daughter of the Queen of Sheba (1999). In 1979, Lyden joined National Public Radio as a freelance reporter in the Chicago bureau.By 1989, Lyden was stationed in London, covering The Troubles in Northern Ireland. She covered the Gulf War from the Middle East. Throughout the 1990s and 2000s, she continued to serve as a foreign correspondent for NPR. Lyden, then living in Brooklyn, was NPR’s first correspondent on the air from New York during the September 11 attacks and reported from “Ground Zero”. In late 2001, she served as a foreign correspondent in Afghanistan. As a regular substitute host for Weekend All Things Considered and other shows, like Weekend Edition, she interviewed numerous poets, authors, filmmakers. She and the late John McChesney produced “Anatomy of a Shooting” in 2006, about the accidental killing of her Iraqi translator, Yasser Salihee, by an American soldier.