No Barrier Can Contain It: An Evening with Ariel Mae Lambe

An Evening with Ariel Mae Lambe

No Barrier Can Contain

Vividly recasting Cuba’s politics in the 1930s as transnational, No Barrier Can Contain It reimagines Cuban activism during an era previously regarded as a lengthy, defeated lull. In this period, many Cuban activists began to look at their fight against strongman rule and neocolonial control at home as part of the international antifascist movement that exploded with the Spanish Civil War. Frustrated by multiple domestic setbacks, Cuban activists found strength in the face of repression by refusing to view their political goals as confined to the island. As individuals and in groups, Cubans from diverse backgrounds and political stances self-identified as antifascists and moved, both physically and symbolically, across borders and oceans, cultivating networks and building solidarity for a New Cuba. 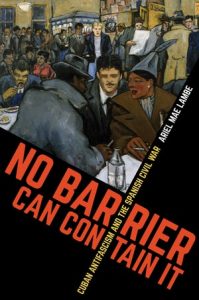 Ariel Mae Lambe is Assistant Professor of History at the University of Connecticut’s Waterbury Campus, where she teaches Latin American, Caribbean, and U.S. history courses. She earned her Ph.D. in History from Columbia University and her B.A. in History from Yale College. She lives in Hamden, Connecticut with her husband and two young daughters.