Nervous System: An Evening with Lina Meruane and Megan McDowell

An Evening with Lina Meruane and Megan McDowell

An electrifying novel about illness, displacement, and what holds us together, by the author of Seeing Red.

Ella is an astrophysicist struggling with her doctoral thesis in the “country of the present” but she is from the “country of the past,” a place burdened in her memory by both personal and political tragedies. Her partner, El, is a forensic scientist who analyzes the bones of victims of state violence and is recovering from an explosion at a work site that almost killed him. Consumed by writer’s block, Ella finds herself wishing that she would become ill, which would provide time for writing and perhaps an excuse for her lack of progress. Then she begins to experience mysterious symptoms that doctors find undiagnosable.

As Ella’s anxiety grows, the past begins to exert a strong gravitational pull, and other members of her family come into focus: the widowed Father, the Stepmother, the Twins, and the Firstborn. Each of them has their own experience of illness and violence, and eventually the systems that both hold them together and atomize them are exposed.

Lina Meruane’s Nervous System is an extraordinary clinical biography of a family, full of affection and resentment, dark humor and buried secrets, in which illness describes the traumas that can be visited not just upon the body, but on families and on the history of the countries—present and past—that we live in. 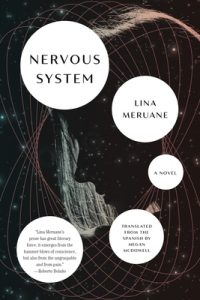 Lina Meruane is the award-winning Chilean author of Nervous System and Seeing Red. She has received grants from the Guggenheim Foundation, National Endowment for the Arts, and was a DAAD Writer in Residence in Berlin. She teaches at New York University.

Megan McDowell has translated many of the most important Latin American writers working today, including Samanta Schweblin and Alejandro Zambra. Her translations have won the English PEN award and the Premio Valle-Inclán, and been nominated three times for the International Booker Prize. Her short story translations have been featured in the New Yorker, the Paris Review, Tin House, McSweeney’s, and Granta, among others. She is the recipient of a Literature Award from the American Academy of Arts and Letters. She lives in Santiago, Chile.