Between 1945 and 1973, about 350,000 unmarried Canadian mothers were persuaded, coerced or forced into giving their babies up for adoption. Many babies were illegally given away, like a puppy at the pound, for a nominal donation to the church. On Christmas Eve, 1952 Nadean Stone became one of those babies.

Raised on a remote farm with no electricity or indoor plumbing, her birthday wish every year is to find her birth mother. With no records of her birth, she battles the provincial Government, to no avail.

Education is her salvation leading Nadean to marriage into a powerful political family and a glamorous new life on an exotic Caribbean island. Fearful events unfold that propel her on a captivating journey of seemingly insurmountable personal challenges, including a battle with an aggressive form of cancer, a kidnapping and a harrowing escape from the island, her tormentors in hot pursuit. She suffers unbelievably great losses that would break many a spirit. Yet as one reviewer notes, “She soldiers on with unfailing courage.”

Told with humor and suspense, No Stone Unturned is an inspiring triumphant memoir of courage and perseverance against all odds. 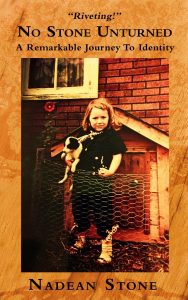 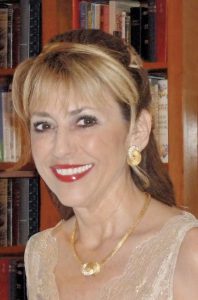 In 2004, Nadean helped launch a weekday one-hour talk show on NBC Miramar, FL as the show’s Booker and Celebrity Producer.

Nadean is a Legal Management Consultant and author. She spent 44 years searching for her birth mother, challenging the current law in Ontario Canada regarding non-adoptee’s access to their birth records.

She works as an advocate for children and adoptees, with an interest in public policy and legislation.

In July 2018 she filed a petition with the UN Commission on the Rights of the Child illuminating numerous Articles of the UN Convention that the Province of Ontario has violated in its treatment of illegally adopted children.

She has consulted with a leading civil rights attorney in Toronto with a view to amending Ontario’s current law, enabling non-adoptees access to their birth records.

Nadean is currently working on a series of children’s stories about her adventures on her grandmother’s farm, as well as a story about her much-loved Aunt Roberta.

She and her husband divide their time between their home in Florida and their cottage in Vermont.