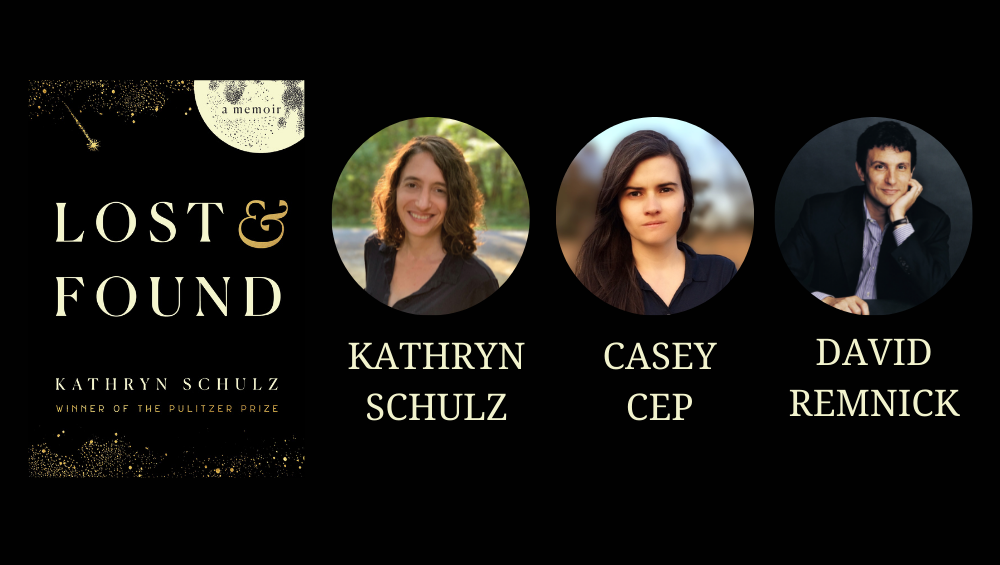 A Virtual Evening with Kathryn Schulz 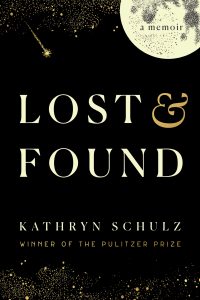 An enduring account of joy and sorrow from one of the great writers of our time, The New Yorker’s Kathryn Schulz, winner of the Pulitzer Prize

“Our lives do indeed deserve and reward the kind of honest, gentle, brilliant scrutiny Schulz brings to bear on her own life. The book is profound and beautiful.”—Marilynne Robinson, author of Housekeeping and Gilead

Eighteen months before Kathryn Schulz’s beloved father died, she met the woman she would marry. In Lost & Found, she weaves the stories of those relationships into a brilliant exploration of how all our lives are shaped by loss and discovery—from the maddening disappearance of everyday objects to the sweeping devastations of war, pandemic, and natural disaster; from finding new planets to falling in love.

Three very different American families form the heart of Lost & Found: the one that made Schulz’s father, a charming, brilliant, absentminded Jewish refugee; the one that made her partner, an equally brilliant farmer’s daughter and devout Christian; and the one she herself makes through marriage. But Schulz is also attentive to other, more universal kinds of conjunction: how private happiness can coexist with global catastrophe, how we get irritated with those we adore, how love and loss are themselves unavoidably inseparable. The resulting book is part memoir, part guidebook to living in a world that is simultaneously full of wonder and joy and wretchedness and suffering—a world that always demands both our gratitude and our grief.

A staff writer at The New Yorker and winner of the Pulitzer Prize, Kathryn Schulz writes with curiosity, tenderness, erudition, and wit about our finite yet infinitely complicated lives. Crafted with the emotional clarity of C. S. Lewis and the intellectual force of Susan Sontag, Lost & Found is an uncommon book about common experiences.

CASEY CEP is a staff writer at The New Yorker and the author of Furious Hours: Murder, Fraud, and the Last Trial of Harper Lee, which was a New York Times bestseller and named one of the best books of 2019 by the Washington Post, The Economist, TIME Magazine, and President Barack Obama. She graduated from Harvard College with a degree in English, then earned an M.Phil in Theology at the University of Oxford as a Rhodes Scholar. She lives on the Eastern Shore of Maryland with her family.

DAVID REMNICK has been editor of The New Yorker since 1998 and a staff writer since 1992. He has written many pieces for the magazine, including reporting from Russia, the Middle East, and Europe, and profiles of Barack Obama, Bill Clinton, Katharine Graham, Mike Tyson, Ralph Ellison, Philip Roth, and Benjamin Netanyahu.

Remnick began his reporting career as a staff writer at the Washington Post in 1982, where he covered stories for the Metro, Sports, and Style sections. In 1988, he started a four-year tenure as a Washington Post Moscow correspondent, an experience that formed the basis of his 1993 book on the former Soviet Union, “Lenin’s Tomb: The Last Days of the Soviet Empire.” In 1994, “Lenin’s Tomb” received both the Pulitzer Prize for nonfiction and a George Polk Award for excellence in journalism.

Under Remnick’s leadership, The New Yorker has become the country’s most honored magazine. It has won fifty-three National Magazine Awards, including multiple citations for general excellence, and has been named a finalist a hundred and ninety-two times, more than any other publication. In 2016, it became the first magazine to receive a Pulitzer Prize for its writing, and now has won six, including the gold medal for public service. Remnick’s personal honors include Advertising Age’s Editor of the Year, in 2000 and 2016, and election to the American Academy of Arts and Letters, in 2016.

Remnick has written six books: “Lenin’s Tomb,” “Resurrection: The Struggle for a New Russia,” “King of the World” (a biography of Muhammad Ali), “The Bridge” (a biography of Barack Obama), and “The Devil Problem” and “Reporting,” which are collections of some of his pieces from the magazine. Remnick has edited many anthologies of New Yorker pieces, including “Life Stories,” “Wonderful Town,” “The New Gilded Age,” “Fierce Pajamas,” “Secret Ingredients,” and “Disquiet, Please!”

Remnick has contributed to The New York Review of Books, Vanity Fair, Esquire, and The New Republic. He has been a visiting fellow at the Council on Foreign Relations and has taught at Princeton, where he received his B.A., in 1981, and at Columbia. He lives in New York with his wife, Esther Fein; they have three children, Alex, Noah, and Natasha.