An Evening with Lev AC Rosen

in conversation with Dan Chaon 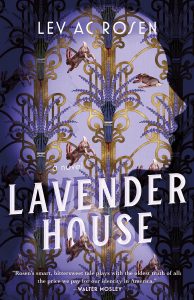 A delicious story from a new voice in suspense, Lev AC Rosen’s Lavender House is Knives Out with a queer historical twist.

“Tightly spun and utterly immersive, Lev AC Rosen delivers a deliciously twisty and queer whodunnit in Lavender House. With a mid-century mystery as sprawling as its titular mansion, the velvet knives in this one are sharp as hell.” –P. J. Vernon, author of Bath Haus

Lavender House, 1952: the family seat of recently deceased matriarch Irene Lamontaine, head of the famous Lamontaine soap empire. Irene’s recipes for her signature scents are a well guarded secret—but it’s not the only one behind these gates. This estate offers a unique freedom, where none of the residents or staff hide who they are. But to keep their secret, they’ve needed to keep others out. And now they’re worried they’re keeping a murderer in.

Irene’s widow hires Evander Mills to uncover the truth behind her mysterious death. Andy, recently fired from the San Francisco police after being caught in a raid on a gay bar, is happy to accept—his calendar is wide open. And his secret is the kind of secret the Lamontaines understand.

Andy had never imagined a world like Lavender House. He’s seduced by the safety and freedom found behind its gates, where a queer family lives honestly and openly. But that honesty doesn’t extend to everything, and he quickly finds himself a pawn in a family game of old money, subterfuge, and jealousy—and Irene’s death is only the beginning.

When your existence is a crime, everything you do is criminal, and the gates of Lavender House can’t lock out the real world forever. Running a soap empire can be a dirty business.

Lev AC Rosen writes books for people of all ages, most recently Camp, which was a best book of the year from Forbes, Elle, and The Today Show, among others, and is a Lambda finalist and ALA Rainbow List Top Ten. He lives in NYC with his husband and a very small cat. You can find him online at LevACRosen.com and @LevACRosen.

Dan Chaon is the author of six previous books, including Ill Will, a national bestseller, named one of the ten best books of 2017 by Publishers Weekly. Other works include the short story collection Stay Awake (2012), a finalist for the Story Prize; the national bestseller Await Your Reply; and Among the Missing, a finalist for the National Book Award. Chaon’s fiction has appeared in the Best American Short Stories, the Pushcart Prize Anthologies, and the O. Henry Collection. He has been a finalist for the National Magazine Award in Fiction and the Shirley Jackson Award, and he was the recipient of an Academy Award in Literature from the American Academy of Arts and Letters. Chaon lives in Cleveland.