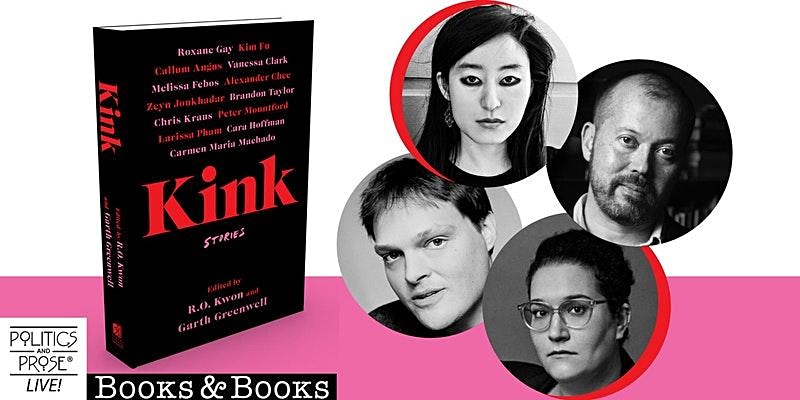 An Evening with Kwon, Greenwell, Machado, and Chee

The stories within explore bondage, power-play, and submissive-dominant relationships; we are taken to private estates, therapists’ offices, underground sex clubs, and even a sex theater in early-20th century Paris. While there are whips and chains, sure, the true power of these stories lies in their beautiful, moving dispatches from across the sexual spectrum of interest and desires, as portrayed by some of today’s most exciting writers.

R.O. Kwon is the author of the nationally bestselling first novel, The Incendiaries. Named a best book of the year by over forty publications, it was a finalist for the National Book Critics Circle John Leonard Award for Best First Book, and Los Angeles Times First Book Prize. Kwon’s writing has appeared in The New York Times, The Guardian, The Paris Review, NPR, and elsewhere. She is a National Endowment for the Arts fellow.

Garth Greenwell is the author of What Belongs to You, which won the British Book Award for Debut of the Year, was longlisted for the National Book Award, and was a finalist for six other awards. A New York Times Book Review Editors’ Choice, it was named a Best Book of 2016 by over fifty publications in nine countries. His second book of fiction, Cleanness, was published in 2020. His fiction has appeared in The New Yorker, The Paris Review, A Public Space, and VICE, and he has written criticism for The New Yorker, the London Review of Books, and The New York Times Book Review, among others. He is a 2020 Guggenheim Fellow.

Carmen Maria Machado is the author of the bestselling memoir In the Dream House and the award-winning short story collection Her Body and Other Parties. She has been a finalist for the National Book Award and the winner of the Bard Fiction Prize, the Lambda Literary Award for Lesbian Fiction, the Lambda Literary Award for LGBTQ Nonfiction, the Brooklyn Public Library Literature Prize, the Shirley Jackson Award, and the National Book Critics Circle’s John Leonard Prize. The New York Times listed Her Body and Other Parties as a member of “The New Vanguard,” one of “15 remarkable books by women that are shaping the way we read and write fiction in the 21st century.” She is the Abrams Artist-in-Residence at the University of Pennsylvania.

Alexander Chee is the author of the novels Edinburgh and The Queen of the Night, and the essay collection How To Write An Autobiographical Novel. He is a contributing editor at The New Republic, and an editor at large at VQR. His essays and stories have appeared recently in The New York Times Magazine, T Magazine, and the LA Times, among others, and he contributed to both the 2016 and 2019 Best American Essays. He teaches creative writing at Dartmouth College.