Since separating from her philandering husband, Boca Raton writer Becks Ruchinsky has struggled to build a closer relationship with her quirky and contentious father, Tootsie, who lives in a retirement home. One evening, as she and her father are relaxing on the home’s front porch, an elderly woman accuses Tootsie of having murdered her husband fifty years earlier.

Tootsie admits to ratting on the man, who’d cheated their Jewish syndicate boss out of thousands of dollars, but denies killing the widow’s husband. He also admits to having friends in the Jewish mafia and shares stories about his experiences. But the more time she spends with her father, the more convinced Becks becomes that Tootsie is lying about his involvement. Determined to discover the truth about her dad’s past, she sets out on a journey to undercover his darkest secrets. She learns he worked for the Jewish mafia –running numbers for the Cuban lottery, beating up Nazi sympathizers, and smuggling arms to Israeli independence fighters. When she learns that he murdered his best friend and, possibly, his own brother, she must decide if she can accept his criminal past – or cut him out of her life.

The Yiddish Gangster’s Daughter also explores the impact our parents’ relationships have on our own. Throughout the book, Becks challenges her father on his infidelity toward her mother and becomes frustrated by his refusal to acknowledge that what he did was hurtful to his entire family. She’s upset when Tootsie minimizes her husband’s affair and encourages her to take him back. Ultimately, Becks realizes that she cannot forgive her husband for cheating until she comes to terms with her father’s infidelities…and her mother’s willingness to put up with them.

A gripping and thought-provoking murder mystery, this award-winning novel explores the colorful and precarious world of the 1940s and 1950s Jewish mafia . . . and the limits of familial love.

A compelling and well-written family drama. Cochran beautifully captures a daughter’s angst and frustration with a father who’s determined to hold onto his secrets even when his family members’ lives are at risk. These are characters you want to be friends with . . . and a few you hope never to run into in a dark alley.
Sharon Potts, award-winning author of The Other Traitor

A gripping family drama in which a daughter has to confront the mystery of her father’s criminal past. Gritty and realistic and hard to put down. Well done!
Deborah Shlian, author of Florida Book Award Gold Medal Winner for Rabbit on the Moon

A fascinating and engrossing read. The Yiddish Gangster’s Daughter examines questions of trust and loyalty through the dual eyes of a father with a hidden past and a daughter who is gradually discovering her father’s secrets – and wishes she hadn’t. It’s a story of heartbreak and loss told with humor and grace.
Rabbi Ilene Schneider, award winning author of the Rabbi Akiva Cohen Mysteries and of Talking Dirty – in Yiddish 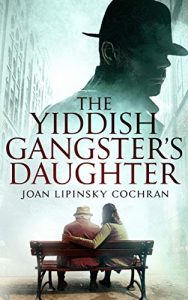 Joan Lipinsky Cochran is a former journalist who now focuses on writing crime-related novels that explore subcultures of American Judaism. Her most recent book, The Yiddish Gangster’s Daughter, is about a woman whose life is endangered when she discovers her father was a member of the Jewish mafia. It was one of three 2011 Claymore Award finalists and an Amazon Breakthrough Novel Award quarter-finalist. Her first book, Still Missing Beulah: Stories of Jews and Blacks in Mid-Century Miami, explores the racism and anti-Semitism that tarnished Miami’s past and informed the relationship between the two minority groups. Three of the short stories in that collection have won literary awards. When she’s not working on a novel, Joan is testing recipes and writing food columns and articles, playing classical and Irish violin, reading, sailing, and bicycling. She lives in Boca Raton with her husband and ungrateful cat.