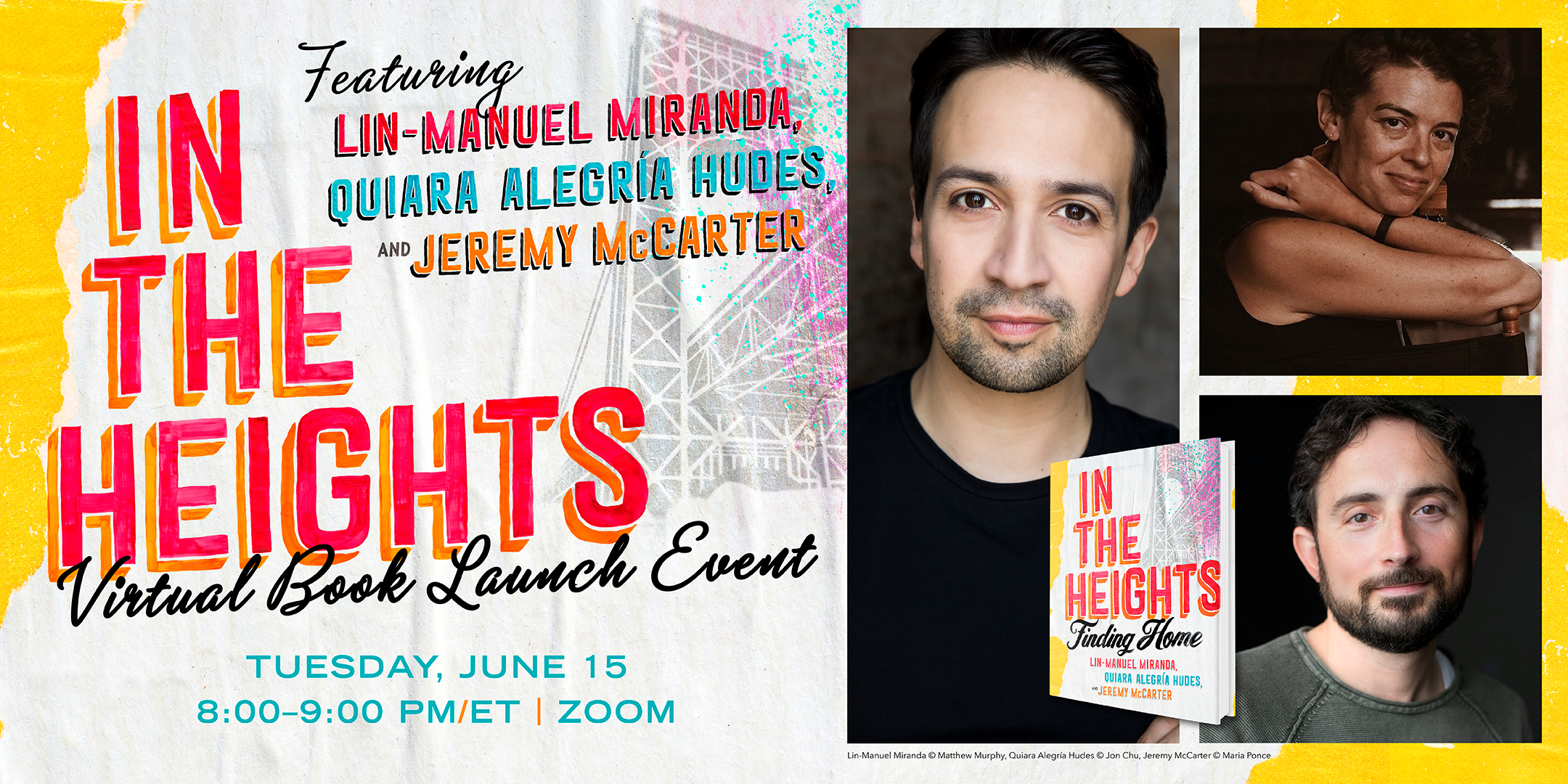 Join us for a Virtual Book Launch with

in celebration for the release of

In the Heights: Finding Home

Lights up on Washington Heights!

Before Hamilton became a global phenomenon, before Lin-Manuel Miranda became a household name, a little show called In the Heights shook up Broadway with its hip-hop and salsa soundtrack and big, bilingual heart. In the new book In the Heights: Finding Home, Lin-Manuel Miranda, Quiara Alegría Hudes, and Jeremy McCarter tell the story of the show’s humble beginnings, from rehearsals ina bookstore basement to the Broadway smash (and soon-to-be feature film!) that created an unbreakable community and a new kind of family for everyone involved.

Sure to be an unforgettable conversation on creativity, community, and finding home, this is your chance to hear directly from the creative team behind the timeless story of how one neighborhood—Washington Heights—can speak to the world.

Please contact Books & Books with any questions. We can’t wait to see you there! 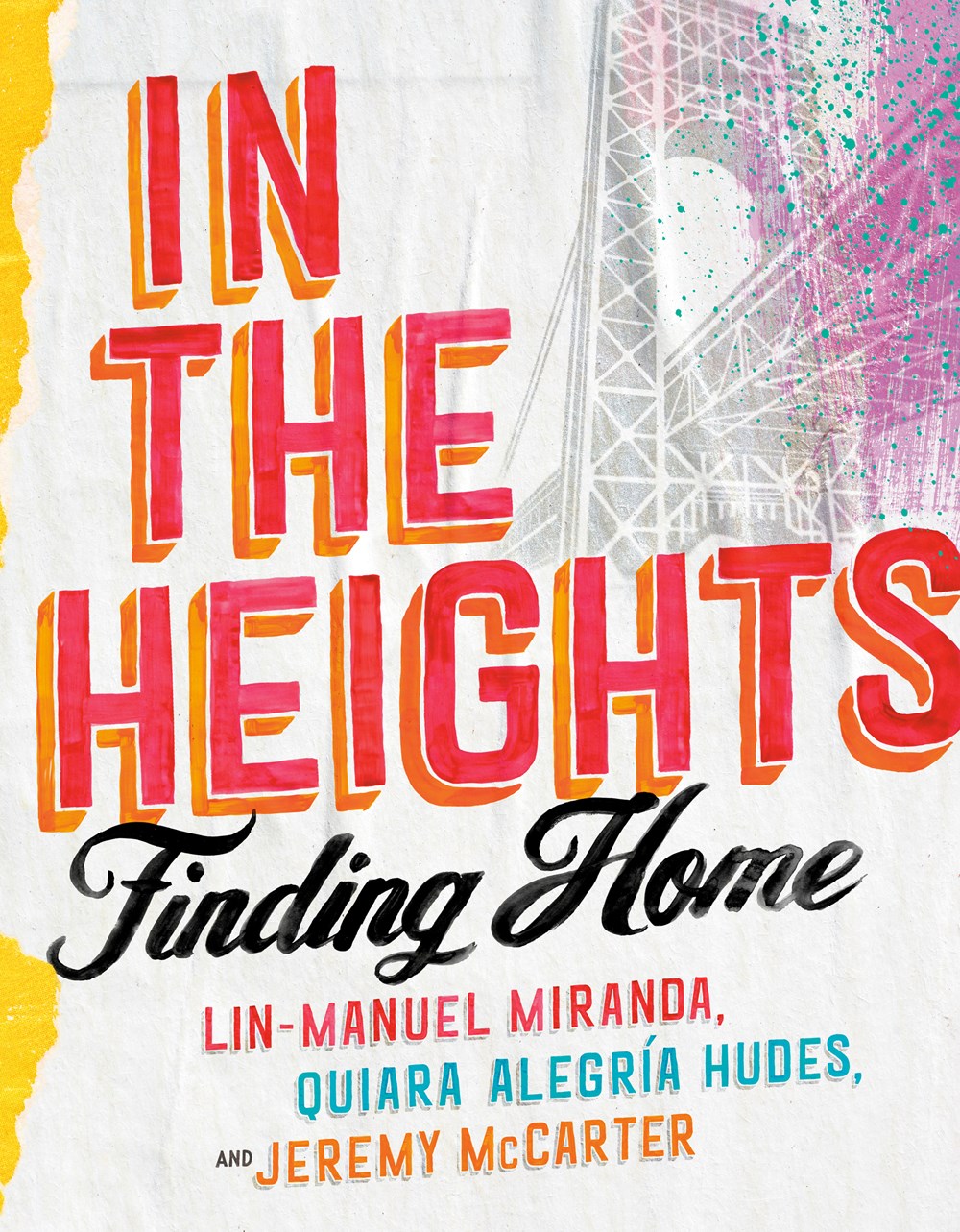 The eagerly awaited follow-up to the #1 New York Times bestseller Hamilton: The Revolution, Lin-Manuel Miranda’s new book gives readers an extraordinary inside look at In the Heights, his breakout Broadway debut, written with Quiara Alegría Hudes, soon to be a Hollywood blockbuster.

In 2008, In the Heights, a new musical from up-and-coming young artists, electrified Broadway. The show’s vibrant mix of Latin music and hip-hop captured life in Washington Heights, the Latino neighborhood in upper Manhattan. It won four Tony Awards and became an international hit, delighting audiences around the world. For the film version, director Jon M. Chu (Crazy Rich Asians) brought the story home, filming its spectacular dance numbers on location in Washington Heights. That’s where Usnavi, Nina, and their neighbors chase their dreams and ask a universal question: Where do I belong?

In the Heights: Finding Home reunites Miranda with Jeremy McCarter, co-author of Hamilton: The Revolution, and Quiara Alegría Hudes, the Pulitzer Prize–winning librettist of the Broadway musical and screenwriter of the film. They do more than trace the making of an unlikely Broadway smash and a major motion picture: They give readers an intimate look at the decades-long creative life of In the Heights.

Like Hamilton: The Revolution, the book offers untold stories, perceptive essays, and the lyrics to Miranda’s songs—complete with his funny, heartfelt annotations. It also features newly commissioned portraits and never-before-seen photos from backstage, the movie set, and productions around the world.

This is the story of characters who search for a home—and the artists who created one.

Lin-Manuel Miranda is an award-winning composer, lyricist, and performer, as well as the recipient of a 2015 MacArthur Foundation Award. His most recent musical, Hamilton, was awarded the 2016 Pulitzer Prize for Drama and earned a record-breaking sixteen Tony Award nominations, winning eleven. Miranda’s first Broadway musical, In the Heights, received four Tony Awards. Miranda contributed music, lyrics, and vocals to Disney’s Moana, earning him an Oscar nomination and a Grammy Award for the original song “How Far I’ll Go.” He lives in New York City with his wife, sons, and dog.

Quiara Alegría Hudes is the Pulitzer Prize-winning playwright of Water By the Spoonful and the author of a memoir, My Broken Language. She wrote the book and screen adaptation for the Tony-winning Broadway musical In the Heights. As a prison reform activist, Hudes and her cousin founded Emancipated Stories, a platform where people behind bars can share one page of their life story with the world. She lives with her family in New York but frequently returns to her native Philly.

Jeremy McCarter is the author of Young Radicals and co-author of the #1 New York Times bestseller Hamilton: The Revolution. He is the founder and executive producer of Make-Believe Association, a Chicago-based production company. He spent five years on the artistic staff of the Public Theater and has served on the jury of the Pulitzer Prize for Drama. He has written for New York magazine, The New York Times, and The Wall Street Journal, among others. He lives in Chicago with his family.

Tickets are available for $40 (+ tax & fee) and include a copy of In the Heights: Finding Home shipped straight to your door. Once you have registered on Eventbrite, you will receive an email from us approximately 48 hours before the event starts with a link for you to stream.