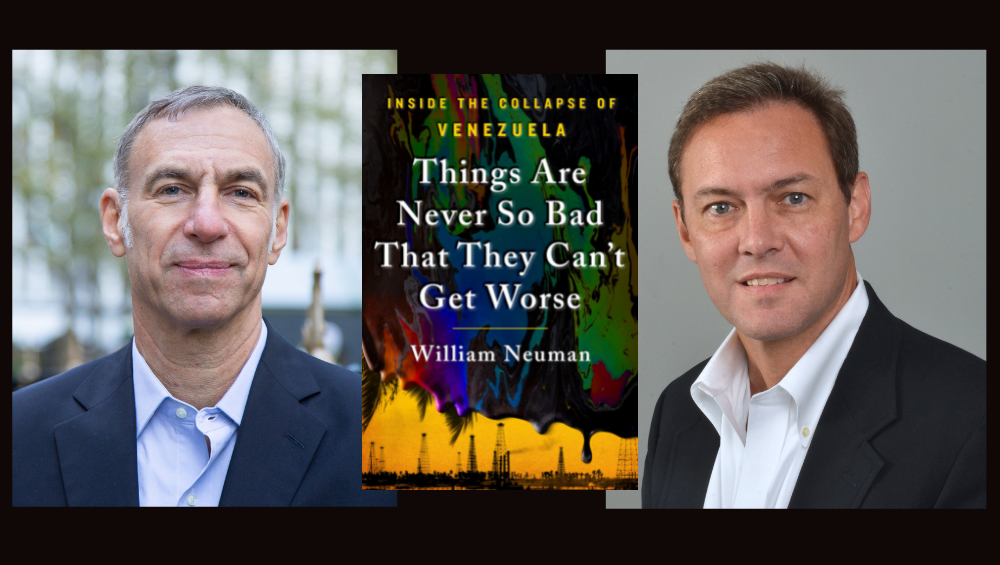 In-Person | Things Are Never So Bad That They Can’t Get Worse: An Evening with William Neuman and Tim Padgett

An Evening with William Neuman

Things Are Never So Bad That They Can’t Get Worse: Inside the Collapse of Venezuela 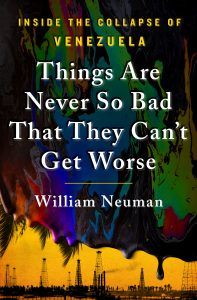 A nuanced and deeply-reported account of the collapse of Venezuela, and what it could mean for the rest of the world.

Today, Venezuela is a country of perpetual crisis—a country of rolling blackouts, nearly worthless currency, uncertain supply of water and food, and extreme poverty. In the same land where oil—the largest reserve in the world—sits so close to the surface that it bubbles from the ground, where gold and other mineral resources are abundant, and where the government spends billions of dollars on public works projects that go abandoned, the supermarket shelves are bare and the hospitals have no medicine. Twenty percent of the population has fled, creating the largest refugee exodus in the world, rivaling only war-torn Syria’s crisis. Venezuela’s collapse affects all of Latin America, as well as the United States and the international community.

Republicans like to point to Venezuela as the perfect example of the emptiness of socialism, but it is a better model for something else: the destructive potential of charismatic populist leadership. The ascent of Hugo Chávez was a precursor to the emergence of strongmen that can now be seen all over the world, and the success of the corrupt economy he presided over only lasted while oil sold for more than $100 a barrel. Chávez’s regime and policies, which have been reinforced under Nicolás Maduro, squandered abundant resources and ultimately bankrupted the country.

Things Are Never So Bad That They Can’t Get Worse
is a fluid combination of journalism, memoir, and history that chronicles Venezuela’s tragic journey from petro-riches to poverty. Author William Neuman witnessed it all firsthand while living in Caracas and serving as the New York Times Andes Region Bureau Chief. His book paints a clear-eyed, riveting, and highly personal portrait of the crisis unfolding in real time, with all of its tropical surrealism, extremes of wealth and suffering, and gripping drama. It is also a heartfelt reflection of the country’s great beauty and vibrancy—and the energy, passion, and humor of its people, even under the most challenging circumstances.

WILLIAM NEUMAN is an author and journalist who reported for the New York Times for over 15 years. He served as the Times Andes Region Bureau Chief from 2012 to 2016 while based in Caracas, Venezuela. He previously reported for the New York Post and his work has also been featured by CNBC, NBC News, Folha de S.Paulo, Jornal Extra, Sydney Morning Herald, and La Nación, among others. He began his journalism career while living in Mexico, and has published English translations of several Spanish-language novels.

TIM PADGETT is the Americas editor for Miami NPR affiliate WLRN, covering Latin America, the Caribbean and their key relationship with South Florida.

Padgett has reported on Latin America for more than 30 years – including for Newsweek as its Mexico City bureau chief and for Time as its Latin America and Miami bureau chief – from the end of Central America’s civil wars to the current normalization of U.S.-Cuba relations. He has interviewed more than 20 heads of state.

In 2005, Padgett received Columbia University’s Maria Moors Cabot Prize for his body of work in Latin America. In 2016 he won a national Edward R. Murrow award for the radio series “The Migration Maze” about the brutal causes of – and potential solutions to – Central American migration.

Padgett is an Indiana native and graduate of Wabash College. He received a master’s degree in journalism from Northwestern University’s Medill School and studied in Caracas, Venezuela, at the Universidad Católica Andrés Bello. He has been an adult literacy volunteer and is a member of the Catholic poverty aid organization St. Vincent de Paul.