In-Person | The Perils of Isabella the Great Dane: An Evening with Mel Gorham and Steve Moss

An Evening with Mel Gorham

The Perils of Isabella the Great Dane

Please note that at this time, masks are still required inside all of our locations by all patrons. Thank you for your cooperation. Gorham will also be showcasing her artwork. 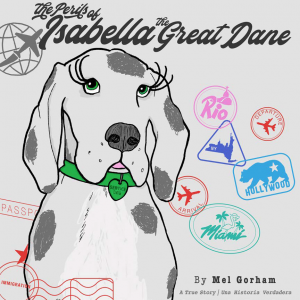 “The Perils of Isabella the Great Dane” is published under Archway Publishing from Simon & Schuster operated by Author Solutions, LLC.

On this Earth we have a choice to be respectful to animals, or not. This is a story about me and my kind human family. It’s been a charmed life, but that doesn’t mean it’s been easy. It has certainly been an adventure, one that I would like to share with you. I’m a proud member of the animal kingdom and with this book, hope to open the minds and hearts of all the children around the world- educating them in the humane treatment of all animals on this Earth.

MEL GORHAM has been called a force to be reckoned with. She was born in Miami, Florida on October 27th, 1959 as Marilyn Schnier to a Cuban born Catholic beauty & an American Jewish father born in New Jersey, a newspaper reporter/journalist/actor and mother a beautician. Mel grew up ‘an only child’ in a small middle class, but unique family… filled with great memories of fun, laughter and support. She started playing classical piano at 5, went strongly into dance, then after stepping on the grand stage by 13, was greatly bitten by “The Acting Bug.”

Knowing exactly what she wanted to do with her life at such a young age, she attended the prestigious University of Miami Ring Theater for 4 years and earned herself a bachelor of fine arts degree in drama. Two weeks after graduation she moved to Manhattan at 21, focused, talented and driven, she landed herself right onto the New York City Broadway stage, and into a long successful acting career.

Today, considered a seasoned actress, she fearlessly acted toe to toe with some of Hollywood’s powerhouse Actors & Directors on Film, T.V. and Broadway. Now, at 60 and proud of it, she has once again re-invented herself.

She has become a writer & published author.  Her first children’s book: “The Perils of Isabella the Great Dane” carries a 5 star rating.  She is completing her second book which will be dedicated to children with anxiety, panic disorder and who are riddled with fear and insecurities. She is currently working alongside a child psychologist: Dr. George Hernandez in making sure to attack the problem by finding solutions to comfort the anxiety ridden children without medication.

She wrote the second book in English and Spanish, as she did her first book, in order to reach as many children around the world as she possibly can, in bringing them a solution and positive outlook on this terrible disorder, a subject matter she knows well, understands and has lived with for over 20 years.

In production with a beautifully well made plush animal representing her late great Dane service dog Isabella, will hopefully become to children what “the blanket was to Linus van Pelt” from Charlie Brown fame bringing comfort, security and joy to the child.  This book will have the option of purchasing the great Dane service dog plush animal as well.

Mel is a work in progress, never ceasing to amaze anyone who knows her. She has many strong talents: such as, painting on canvas and selling her work at gallery events, in 2015 founded a private club for women to share their inner most secrets with, loves interior designing, creating French gardens, un-regretfully marrying quite a few times~ never looking back, happily dancing & singing herself right through life & owning the title of a true funny girl.

Her latest film is: “The Rainbow Bridge Motel.”  Her work in this film is nothing short of hysterical, yet, giving such a powerful deep performance. It can be seen and/or purchased on Prime Amazon.

In rough times like these, her hope is to help many children, something so unfamiliar to her because she has never had children of her own, yet has written something so real for them to identify with (due to her own experiences) that branding her dog Isabella undoubtedly had to happen.

This particular great Dane helped Mel for 11 years with unconditional love, daily therapy and comfort during her battle with anxiety and panic attacks.

Their special bond started when Mel adopted Isabella as a rescue 3 month old puppy in Brazil, training her and teaching her how to deal when the panic attacks that came out of nowhere.

Living together in New York City, Los Angeles and at her final resting place, Miami Beach, on February 5th, 2020, at almost 11 years old, she passed away of cancer with dignity, love and respect, and now Mel’s second book: “Isabella the Great Dane Service Dog” has been dedicated to Isabella~ the greatest dame of them all.