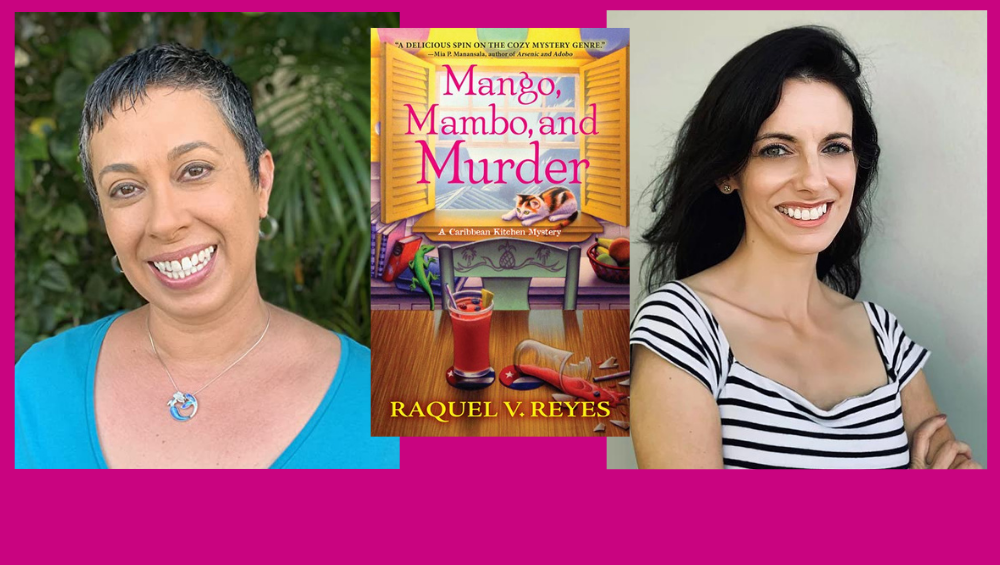 They will discuss Reyes’ new book Mango, Mambo, and Murder, called a “a spicy mystery rich with Caribbean food and an enchanting Cuban-American sleuth” by Debra H. Goldstein, the award-winning author of the Sarah Blair mysteries.

Food anthropologist Miriam Quiñones-Smith’s move from New York to Coral Shores, Miami, puts her academic career on hold to stay at home with her young son. Adding to her funk is an opinionated mother-in-law and a husband rekindling a friendship with his ex. Gracias to her best friend, Alma, she gets a short-term job as a Caribbean cooking expert on a Spanish-language morning TV show. But when the newly minted star attends a Women’s Club luncheon, a socialite sitting at her table suddenly falls face-first into the chicken salad, never to nibble again.

When a second woman dies soon after, suspicions coalesce around a controversial Cuban herbalist, Dr. Fuentes–especially after the morning show’s host collapses while interviewing him. Detective Pullman is not happy to find Miriam at every turn. After he catches her breaking into the doctor’s apothecary, he enlists her help as eyes and ears to the places he can’t access, namely the Spanish-speaking community and the tawny Coral Shores social scene.

As the ingredients to the deadly scheme begin blending together, Miriam is on the verge of learning how and why the women died. But her snooping may turn out to be a recipe for her own murder.

RAQUEL V. REYES was raised in oppositional cultures. Her early childhood was not unlike an I Love Lucy rerun with a heavy-accented, handsome Cuban father and a red-headed Southern mother whose smile brightened the room. A short story fan all her life, Raquel’s stories are in several anthologies, including Mystery Most Theatrical, In the Midnight Hour, and Trouble No More. Raquel’s soul food is croquetas with a Jupiña chaser. She lives in Miami, where she watches the waters for mermaids and leviathan.

CHANTEL ACEVEDO: Called “a master storyteller” by Kirkus Reviews, Chantel Acevedo is the author of the novels  Love and Ghost Letters,  A Falling Star, The Distant Marvels, which was a finalist for the 2016 Andrew Carnegie Medal for Excellence in Fiction, and The Living Infinite, hailed by Booklist as a “vivid and enthralling tale of love and redemption.” Acevedo’s middle grade duology. Muse Squad, (called “Riveting and suspenseful” by School Library Journal) was published by Balzer + Bray. She is Professor of English at the University of Miami, where she directs the MFA program.