I Know What’s Best for You: Stories on Reproductive Freedom

Presented in collaboration with Planned Parenthood of South, East and N. Florida.

Join us in-person at Books & Books as featured writers discuss I Know What’s Best for You: Stories on Reproductive Freedom.

Edited by Shelly Oria–author and editor of Indelible in the Hippocampus–this explosive, intersectional collection of essays, fiction, poems, plays, and more, explores the universality of human reproductive experiences, as well as their distinct individuality.

An enlisted sailor must choose between her military career and keeping an unexpected pregnancy. A mother of three decides to become a surrogate, but is unprepared for everything that happens next. A trans man’s pregnancy forces them to approach their key relationships in a new way. A woman’s choice to live a child-free life is put to the test when her husband’s dying wish is for them to become parents. Forced sterilization camps line the borders of America in a dystopian future that may not be far off.

In their own unique and unforgettable way, each storyteller examines our crisis of access to care in ways that are at turns haunting, heartbreaking, and outright funny. This collection is a collaboration with the Brigid Alliance, a nationwide service that arranges and funds confidential and personal travel support to those seeking abortion care. 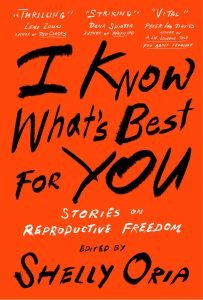 KRISTEN ARNETT is the author of With Teeth: A Novel (Riverhead Books, 2021) which was a finalist for the Lambda Literary Award in fiction and the New York Times bestselling debut novel Mostly Dead Things (Tin House, 2019) which was also a finalist for the Lambda Literary Award in fiction and was shortlisted for the VCU Cabell First Novelist Award. She is a queer fiction and essay writer. She was awarded a Shearing Fellowship at Black Mountain Institute and was longlisted for the Joyce Carol Oates Prize recognizing mid-career writers of fiction. Her work has appeared at The New York Times, TIME, The Cut, Oprah Magazine, Guernica, Buzzfeed, McSweeneys, PBS Newshour, The Guardian, Salon, and elsewhere. Her next book (an untitled collection of short stories) will be published by Riverhead Books (Penguin Random House). She has a Masters in Library and Information Science from Florida State University and currently lives in Miami, Florida.

SARAH ROSE ETTER is the author of Tongue Party, and The Book of X, her first novel, which is the winner of the 2019 Shirley Jackson Award for novel. Her work has appeared or is forthcoming in Guernica, BOMB, Gulf Coast, The Cut, VICE, and more. She has been awarded residences at the Jack Kerouac House, the Disquiet International program in Portugal, and the Gullkistan Writing Residency in Iceland. You can find out more at www.sarahroseetter.com.

KAYLA KUMARI UPADHYAYA is a lesbian writer of essays, short stories, and pop culture criticism living in Miami. She is the managing editor of Autostraddle and the assistant managing editor at TriQuarterly. Her short stories have been published in McSweeney’s, Joyland, Catapult, The Offing, and more, and her pop culture writing appears in The Cut, Vulture, Catapult, Bustle, and others. She was a 2021 nonfiction fellow for Lambda Literary’s Writers Retreat for Emerging LGBTQ Voices, and her chapbook Helen House will be published by Burrow Press in fall 2022.

STEF RUBINO is a writer, community organizer, and student of abolition from Ft. Lauderdale, FL. They teach Literature and writing to high schoolers and to people who are currently incarcerated, and they’re the fat half of the arts and culture podcast Fat Guy, Jacked Guy as well as a writer for Autostraddle.

BOBUQ SAYED is a queer Afghan writer with an MFA in Creative Writing from the University of Miami, where they were a James A. Michener Fellow, and winner of the Dean’s Award and the Irene Pines Award. Their writing has been supported by Lambda Literary, Tin House, Kundiman, and VONA/Voices, and has appeared or is forthcoming in New Australian Fiction 2022, Gulf Coast, Collisions: Fictions of the Future, Meanjin, and The Rumpus. They are the co-editor of an anthology called Nothing to Hide: Voices from Trans and Gender Diverse Australia (Allen and Unwin), and they are a 2022-23 Steinbeck Fellow at SJSU.