An Evening with David E. Hoffman

in conversation with Vanessa Garcia

Give Me Liberty: The True Story of Oswaldo Payá and his Daring Quest for a Free Cuba

Join us in-person at Books & Books as David E. Hoffman discusses his latest book GIVE ME LIBERTY  and the legacy of Oswaldo Payá alongside moderator Vanessa Garcia and special guest Rosa María Payá Acevedo, daughter of Oswaldo Payá. 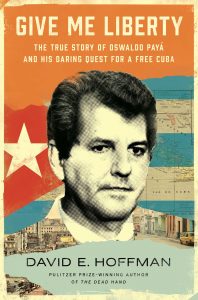 From the Pulitzer Prize–winning Washington Post reporter David E. Hoffman comes the riveting biography of Oswaldo Payá, a dissident who dared to defy Fidel Castro, inspiring thousands of Cubans to fight for democracy.

Oswaldo Payá was seven years old when Fidel Castro seized power in Cuba, promising to create a “free, democratic, and just Cuba.” But Castro instead created an authoritarian regime with little tolerance of free speech or thought. His secret police were trained to crush dissent by East Germany’s ruthless Stasi.

Throughout Cuba’s 20th century history, the dream of democracy was often just within reach, only to be dashed by dictatorship and revived again by a new generation. Payá inherited this dream and it became his life’s work. As a teenager in Communist Cuba, he led a protest against the Soviet-led shattering of the Prague Spring. Before long, he was sent to Castro’s forced labor camps. Payá later became a leading voice of opposition and formed a pro-democracy movement. A devoted Catholic, he championed a simple, bedrock belief that rights are bestowed by God, and not the state. Every day, he witnessed these rights trampled in Cuba. He could not stay silent.

Payá’s most daring challenge to the Cuban government was the Varela Project, a one-page citizen petition demanding free speech, a free press, freedom of association, freedom of belief, private enterprise, free elections and freedom for political prisoners. More than 35,000 people signed the Varela Project, an extraordinary outpouring of protest—with nothing more than pen and paper—against Castro’s decades of despotism. The regime responded by ignoring the petition, arresting dozens of Payá’s followers and sending them to prison for many years. After receiving multiple death threats, Payá was killed in a suspicious car wreck on a remote country road.

Pulitzer Prize–winning reporter David E. Hoffman returns with an epic portrait of a lone individual who had the courage, faith, and persistence to struggle for democracy against an unforgiving dictator. At its heart, Give Me Liberty is a sweeping account of one country’s tragic and continuing struggle for its freedom.

DAVID E. HOFFMAN is a contributing editor and member of the editorial board of The Washington Post. He was previously assistant managing editor, foreign editor, Jerusalem correspondent, Moscow bureau chief, and White House correspondent for the newspaper. He is the author of The Dead Hand: The Untold Story of the Cold War Arms Race and Its Dangerous Legacy, which won the Pulitzer Prize, The Billion Dollar Spy: A True Story of Cold War Espionage and Betrayal, a New York Times bestseller, and The Oligarchs: Wealth and Power in the New Russia. He lives with his wife in Maryland.

VANESSA GARCIA is a Cuban-American multidisciplinary writer who has been writing about Cuba for nearly twenty years. She’s a screenwriter, playwright, journalist, essayist, and novelist. She’s the author of The Amparo Experience, an immersive show that people in Español called “Miami’s Hottest Ticket.” She’s written for The LA Times, The Guardian, The Washington Post, National Review, ESPN, Boston Globe, and The Hill, among others. She currently writes for Sesame Street, Caillou, We Are Family, and is a consultant for Dora the Explorer. Her Debut novel, White Light, won an International Latino Book Award and was one NPRs Best books of the year. Her picture book about her grandfather (who escaped three tyrannies: Franco, Hitler, and then Castro) comes out in October, entitled What the Bread Says. She holds a PhD from the University of California Irvine in Literary Journalism (Creative Nonfiction) – her creative dissertation focused on Cuba.

ROSA MARÍA PAYÁ ACEVEDO is a Cuban democracy activist and human rights defender. In 2015, she founded the citizen initiative Cuba Decide, a movement in favor of changing the political and economic systems in Cuba towards democracy, through a plebiscite. She is the daughter of the late Oswaldo Payá, the recipient of the European Parliament’s Sakharov Prize and two-time nominee of the Nobel Peace Prize, who was killed by the regime in 2012. Rosa María is a graduate of Physics at the University of Havana and of the Global Competitive Leadership program at Georgetown University. She has been a lecturer and guest of honor at various universities throughout the United States and Latin America, as well as at the UN, the Concordia Summit of the Americas, the Freedom Forum, the US Congress, and multiple parliaments in Europe and the Americas.