and in conversation with

Books & Books is thrilled to present a Black Brunch with Natasha Marin, Michael Cooper and Amanda Choo Quan alongside McSweeney’s.

Join award-winning viral curator and poet Natasha Marin and DJ Cooper Libre for Black Brunch at Books & Books. Natasha will pre-launch her new book on Black power — and lead a group discussion on what our power means today in the face of mass incarceration and historical erasure. How do we heal ourselves? How can power also mean peace of mind?

This event is a celebration and a reckoning, just like the book itself. Come for more than just a reading — a chance to talk, dance and heal for Juneteenth and beyond.

Please RSVP only if you intend to join us.

“Black Powerful feels like hope. Not a passive or politicized hope. But the hope of finding and nourishing and protecting your people. Your soul. Your body. This book Natasha gave us is a dap, fam. A tincture. A glass of ginger ale. It should be on every nigga’s nightstand, and would be just as at home in our medicine cabinets.”

—Damon Young, author of What Doesn’t Kill You Makes You Blacker: A Memoir in Essays

Featuring a foreword by Jason Reynolds.

Award-winning viral curator and poet Natasha Marin follows up her acclaimed Black Imagination with a brilliant new collection of sharply rendered, breathtaking reflections from more than one hundred Black voices.

When do you feel most indigenous?

What does it sound like when you claim yourself?

When do you feel most powerful? 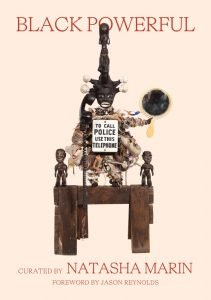 NATASHA MARIN is a conceptual artist whose people-centered projects have circled the globe and have been recognized and acknowledged by Art Forum, the New York Times, the Washington Post, the LA Times, and others. In 2018, Marin manifested BLACK IMAGINATION: The States of Matter, The (g)Listening, and Ritual Objects– a triptych of audio-based, conceptual art exhibitions in and around Seattle, WA. BLACK IMAGINATION is community-based, ongoing and continues to amplify, center, and hold sacred a diverse sample of Black voices including LGBTQIA+ black youth, incarcerated black women, black folks with disabilities, unsheltered black folks, and black children. Marin’s viral web-based project, Reparations, engaged a quarter of a million people worldwide in the practice of “leveraging privilege,” and earned Marin, a mother of two, death threats by the dozens. This is how she healed herself. + www.black-imagination.com

AMANDA CHOO QUAN is a Trinidadian-Jamaican writer and literary organizer. She won the 2020 Johnson and Amoy Achong Caribbean Writers Prize—one of the region’s most significant for emerging writers. Focusing on race, displacement and her homeland, her work appears in Harper’s Bazaar, NYLON, HuffPost, Caribbean Beat, Callaloo, and others. Choo Quan has been awarded fellowships from Callaloo, the Truman Capote Foundation, Juniper, and the Cropper Foundation. She is both a graduate of the University of the West Indies, Mona, Jamaica, as well as CalArts, where she earned an MFA in creative writing. She tweets @amandacq.

Where to find Michael: