In-Person | Antigone’s Example: An Evening with Mihoko Suzuki & UM Center for the Humanities

An Evening with Professor Mihoko Suzuki

This event is FREE and open to the public and books will be available for pre-order the night of the event.

This book investigates early modern women’s interventions in politics and the public sphere during times of civil war in England and France. Taking this transcultural and comparative perspective, and the period designation “early modern” expansively, Antigone’s Example identifies a canon of women’s civil-war writings; it elucidates their historical specificity as well as the transhistorical context of civil war, a context which, it argues, enabled women’s participation in political thought.

“A beautifully written book by one of the leading experts in the field, this is a major contribution on women’s political texts, one that raises vital questions about the history, genres, and chronologies of European political thought, and one that will shape future debate.”—Amanda Capern, editor, Routledge History of Women in Early Modern Europe

“This is a major work of comparative literary and cultural history. Deeply researched, strikingly illustrated, and cogently argued, the book makes a compelling case for revising Giorgio Agamben’s influential notion of a “state of exception” in the light of women’s subaltern perspectives and persuasively argues for the importance of Machiavelli for women’s political writings. Suzuki’s book illuminates a rich set of women writers’ views of themselves as political counsellors who used their literary skills to evade censorship and thus speak truth to power.”—Margaret W. Ferguson, author, Dido’s Daughters: Literacy, Gender, and Empire in Early Modern England and France

“Expertly written and theoretically rich, this book fundamentally challenges the masculinity of political thought and deepens our understanding of the meaning and impact of civil war. Antigone’s Example is truly a field-defining book by its leading scholar.”—Joanne Wright, author, Origin Stories in Political Thought: Discourses on Gender, Power, and Citizenship; coeditor, Feminist Interpretations of Thomas Hobbes. 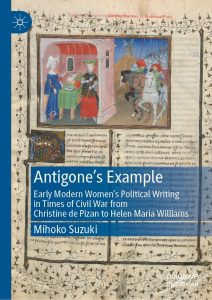 MIHOKO SUZUKI is Professor of English and Cooper Fellow in the Humanities Emerita at the University of Miami.