In-Person | The Holiday in His Eye: An Evening with William Rothman & UM Center for the Humanities

An Evening with Professor William Rothman

The Holiday in His Eye: Stanley Cavell’s Vision of Film and Philosophy

Join us in-person at Books & Books as Professor William Rothman discusses his new book THE HOLIDAY IN HIS EYE: STANLEY CAVELL’S VISION OF FILM AND PHILOSOPHY.

From The World Viewed to Cities of Words, writing about movies was strand over strand with Stanley Cavell’s philosophical work. Cavell was one of the first philosophers in the United States to make film a significant focus of his thought, and William Rothman has long been one of his most astute readers. The Holiday in His Eye collects Rothman’s writings about Cavell—many of them previously unpublished—to offer a lucid, serious introduction to and overview of Cavell’s work, the influence of which has been somewhat limited by both the intrinsic difficulty of his ideas and his challenging prose style. In these engaging and accessible yet philosophically serious and rigorously argued essays, Rothman presents an original, insightful, and compelling vision of the trajectory of Cavell’s oeuvre, one that takes Cavell’s kinship with Emerson as inextricably bound up with his ever-deepening thinking about movies. 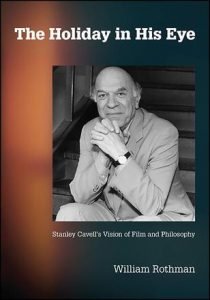 WILLIAM ROTHMAN is a Professor of Cinema Arts at the School of Communication at the University of Miami. He received his Ph.D. in Philosophy from Harvard, where he was an Associate Professor in Visual and Environmental Studies (1976-84), and was Director of the International Honors Program on Film, Television and Social Change in Asia (1986-90).