In-Person: An Evening with Victor Deupi and Jean-Francois Lejeune 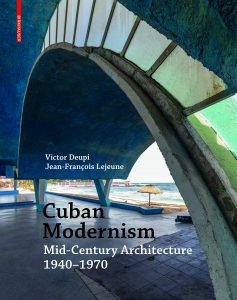 For several decades, 20th century architecture thrived in Cuba and a wealth of buildings was realized prior to the revolution 1959 and in its wake. The designs comprise luxurious nightclubs and stylish hotels, sports facilities, elegant private homes and apartment complexes. Drawing on the vernacular, their architects defined a way to be modern and Cuban at the same time – creating an architecture oscillating between tradition and avantgarde.

Audacious concrete shells, curving ramps, elegant brises-soleils and a fluidity of interior and exterior spaces are characteristic of an airy, often colorful architecture well-suited to life in the tropics. New photographs and drawings were specially prepared for this publication. A biographical survey portraits the 40 most important Cuban architects of the era.

BUY THE BOOK FROM US HERE

Victor Deupi is a Senior Lecturer at the University of Miami School of Architecture where he teaches architectural history and theory, design, and representation. His research focuses on the Early Modern Spanish and Ibero-American world, mid-20th-century Cuba, and contemporary architecture. His books include Architectural Temperance: Spain and Rome, 1700-1759(Routledge, 2015), Transformations in Classical Architecture: New Directions in Research and Practice (Oscar Riera Ojeda Publishers, 2018), Emilio Sanchez in New York and Latin America (Routledge, 2020), Cuban Modernism: Mid-Century Architecture 1940-1970, with Jean-Francois Lejeune (Birkhäuser Verlag, 2021), Emilio Sanchez Revisited: A Centenary Celebration of the Artist’s Life and Work, with LnS Gallery (Oscar Riera Ojeda Publishers, 2021), and Stables: High Design for Horse and Home and Wineries of the World: Architecture and Viticulture, both with Oscar Riera Ojeda (Rizzoli, 2021). Dr. Deupi was also the President of the CINTAS Foundation dedicated to promoting Cuban art and culture from 2016-2018.

Jean-François Lejeune, Ph.D.  is a Professor of architecture, urban design, and history at the University of Miami School of Architecture. His research ranges from Latin American architecture and urbanism to 20th-century vernacular modernism in Spain and Italy. His publications include The Making of Miami Beach 1933-1942: The Architecture of Lawrence Murray Dixon (Rizzoli, 2001), Cruelty and Utopia: Cities and Landscapes of Latin America (Princeton Architectural Press, 2005), Sitte, Hegemann, and the Metropolis (Routledge, 2009), Modern Architecture and the Mediterranean: Vernacular Dialogues and Contested Identities (Routledge, 2010), Nord-Sud: L’architettura moderna e il Mediterraneo (ListLab, 2016), and Rural Architecture and Water Urbanism: The Modern Village in Franco’s Spain (DOM-Publishers, 2021). He is a founder and director of DoCOMOMO-US/Florida and was an Affiliated Fellow at the American Academy in Rome in 2007.