In Person: An Evening with Pierre Losson & Anthony Pereira

An Evening with Pierre Losson

In conversation with Anthony Pereira

The Return of Cultural Heritage to Latin America 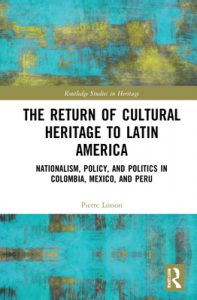 The Return of Cultural Heritage to Latin America takes a new approach to the question of returns and restitutions of cultural heritage artefacts to their country of origin. It is the first publication to look at the domestic politics of claiming countries in order to understand who supports the claims and why.

The book looks at recent case studies that have made headlines in the media: Colombia’s claims for the “Quimbaya Treasure” and funerary statues from San Agustín; Mexico’s attempts at recovering the famous “penacho de Moctezuma” and Teotihuacan murals; and Peru’s successful claims for the Machu Picchu collection held at Yale and Paracas textiles held inSweden. The author analyses how return claims contribute to the strengthening of state-sponsored discourses on the nation; the policy formation process that leads to the formulation of return claims; and who the main actors of the claims are, including civil society individuals, experts, state authorities, and Indigenous communities. The book proposes explanations for why Latin American countries are interested in these artefacts held in Western museums and why these claims have come to light over the past three decades.

The Return of Cultural Heritage to Latin America argues that, far from remaining a subject of conversation among specialists, return claims – in Latin America and elsewhere – ought to be the object of public debate, allowing contemporary societies to address the legacy of colonialism.

Pierre Losson, PhD has worked in French cultural centers in Mexico City and Lima for ten years. His research focuses on cultural policy in Latin America and the restitution of cultural heritage. He graduated in international relations from the Institut d’Études Politiques of Strasbourg, holds MAs in arts administration from the University of Lyon and Latin American and Caribbean Studies from Florida International University, and a Ph.D. in political science from The Graduate Center, CUNY. In fall 2020, he was a post-doctoral fellow at Columbia University’s Italian Academy for Advanced Studies in America. He currently lives in New York City.

Anthony Pereira, PhD, Director of the Kimberly Green Latin American and Caribbean Center at Florida International University, will serve as the discussant for the book presentation.

Free and open to the public. For more information, email [email protected]