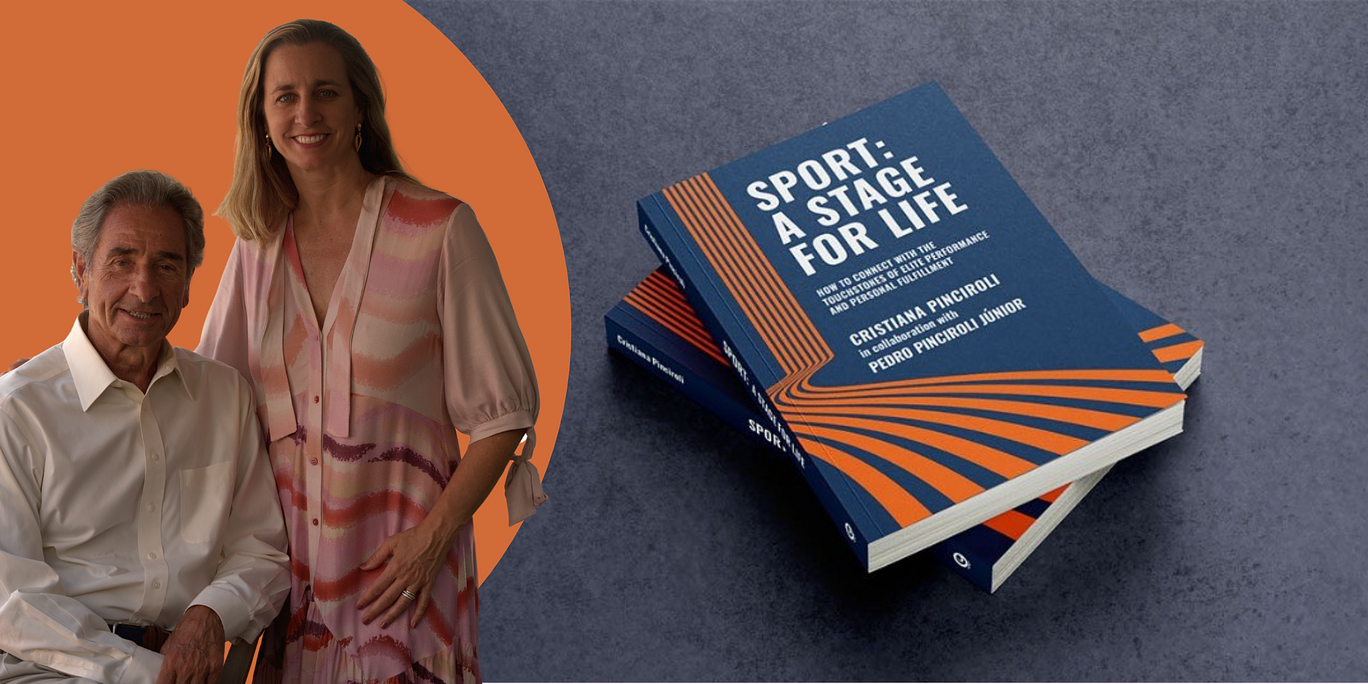 Sport: The Stage of Life

Books & Books is excited to present an evening with Cristiana Pinciroli and Pedro Pinciroli Junior as they celebrate the United States book launch for Sport: A Stage for Life.

The book offers lifestyle tips and insights gained by the author and her father as high performance athletes: Cristiana captained the Brazilian national water polo team; her father, Pedro, competed at two Olympics.

Cristiana Pinciroli has taken on many challenges in her life, as a water polo player, an executive, an entrepreneur and a mother. Now she is venturing into a new arena – the literary field – in sharing her life experiences in the book Esporte, Um Palco Para a Vida, which was released in Brazil during the 2021 Tokyo Olympic Games. On September 9th, the English version will be launched in the United States, under the title Sport: A Stage for Life, at the Books & Books in Coral Gables, Florida.

The book compiles stories of the author and her father, Pedro Pinciroli Júnior, who together have applied the lessons they learned from sport to the advancement of human potential, skills and knowledge. Pinciroli Júnior represented his country in water polo at the Tokyo (1964) and Mexico (1968) Olympics, while Cristiana captained the Brazilian women’s water polo team for 15 years, playing professionally in Italy and gaining recognition as one of the seven best players in the world.

In the words of the author, “sport inspires us to push beyond our limits, face down challenges and develop personal skills that we can replicate in different spheres of life. Sport: A Stage for Life offers guidance on how to apply these different lessons in helping people to progress along their own journeys of self-development and transform their lives”.

In addition to personal anecdotes, the author delves into the stories of world-renowned athletes and coaches, academics, doctors and psychologists, blending inspirational tales with scientific doctrine. Among the case studies are testimonies from such leading figures as Ashleigh Johnson (a 3 times Olympic gold medalist in water polo), Raí (a former Brazilian soccer player), Robert Scheidt (a 7 times Olympic sailor and two-time Olympic gold medalist in sailing), Marcelo Huertas (a professional basketball player formerly with the LA Lakers) and Adam Krikorian (US women’s water polo coach).

A native of São Paulo and mother to three children, Cristiana Pinciroli began her sports career as a high-performance professional water polo player. She captained the Brazilian team for 15 years, playing professionally for four years in Italy, her side winning the European Interclub Champions Cup for the first time. In her final appearance at the World Aquatics Championships in Perth, Australia in 1998, having scored the second-most goals in the tournament, she was recognized as among the seven best female water-polo players in the world.

While still playing water polo, Cristiana began a successful corporate career, gaining over 25 years’ experience as an executive and in people management, 23 of these years with leading Brazilian retail bank Itaú Unibanco.

In 2019, she founded WeTeam, a consultancy dedicated to combining the lessons learned from successful careers in sport and business with the study of positive psychology, with the goal of furthering the development and fulfillment of human potential through training, seminars and mentoring.

For Cristiana, sport has always been something to inspire rather than impose. Her eldest daughter, Alissa, is currently a student-athlete at Stanford University, continuing the family sporting dynasty as a means for achieving a life filled with success and happiness.