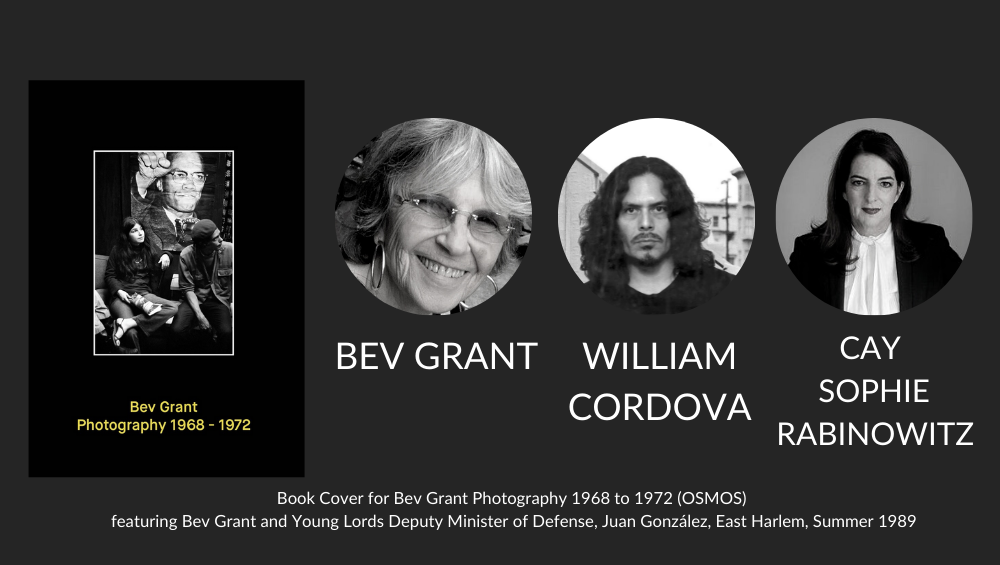 An Evening with Bev Grant

In conversation with william cordova and Cay Sophie Rabinowitz

Scenes from the frontlines of American feminism and civil rights, from the archives of folk singer, filmmaker and photographer Bev Grant

This is the first monograph on Brooklyn-based photographer Bev Grant’s (born 1942) extensive archive of photographs made from 1968 to 1972, when she was on the frontlines as a feminist and political activist. Grant began taking photographs as part of her participation in demonstrations with the Women’s Movement, such as No More Miss America in Atlantic City in 1968 and The Jeannette Rankin Brigade in Washington, DC, in 1968. As a member of the film collective New York Newsreel, she gained access to the Young Lords Party, the Black Panther Party and the Poor People’s Campaign.

“When I sat in on a workshop given by Students for a Democratic Society at Princeton University in 1967, I had no idea of the impact it would have on the rest of my life. The workshop topic was women’s liberation. It was an awakening, a dawn of consciousness that gave me a framework to understand my life and a path that I continue to follow.”

BEV GRANT (born 1942) grew up in Portland, Oregon and moved to New York City in the 1960s. She was radicalized through the Anti-War Movement and became involved in the Women‘s Movement and the Civil Rights Movement as an activist, musician, and photographer. Much of Bev Grant’s photography documents political activism and consciousness raising events from1968 until 1972. Thereafter, she began to focus more on her music. Her exceptional oeuvre includes photographs of the Black Panther Free Breakfast Program, the Jeanette Rankin Brigade March on Washington, the Fillmore East Takeover, the Poor People’s Campaign, GIs Against the War, and the Young Lords Garbage Offensive. Additionally, Grant’s photography depicts her own activism and her involvement with New York Radical Women. Her documentation of the Miss America Protest and W.I.T.C.H. Hex on Wall Street (both in 1968) has been featured in numerous news outlets and exhibitions.

Grant’s photography was used in the film She’s Beautiful When She’s Angry, released in 2015, and her first solo exhibition, in 2018, was co-curated by Alison Gingeras and Cay Sophie Rabinowitz at OSMOS Address in New York City. Bev Grant’s work is currently on view in Sorcieres at the Université Libre de Bruxelles (ULB) and Resistance at the Bunker in West Palm Beach. In 2022 she will have a solo presentation at the American Labor Museum, Botto House National Landmark in New Jersey.

Throughout the 1970s and 1980s, Bev Grant’s band Human Condition performed folk, rock, and world music. In 1991, Grant joined the United Association of Labor Education Northeast Union Women’s Summer School as Cultural Director. Since 1997, she has been Founder and Director of the Brooklyn Women’s Chorus. From 2006 to 2008, Grant performed with other female musicians as part of a group called Bev Grant and the Dissident Daughters and later as WOOL&GRANT. She released the solo album, It’s Personal, in 2017.

Looking back, Grant has articulated an important connection that many women’s liberation organizers had participated in the Civil Rights Movement, and they brought valuable skills and knowledge from that work. In her own words,

“Today, I hope that people look at the photographs and see the intersectionality and humanity of people struggling together towards a better world. Being a photographer, having a camera, gives me a sense of purpose. … I’ll soon be 80 years old. I still feel young and purposeful. I am hopeful about the future, but I don’t try to give advice to the younger folks who are shaping it. The most I have to offer is a look back at history – from which we all can learn”. From Bev Grant Photography 1968 to 1972, edited by Cay Sophie Rabinowitz, published by OSMOS Books, New York, (2021)

cordova’s work addresses the metaphysics of space and time and how objects change and perception changes when we move around in space.

He received a BFA from The School of the Art Institute of Chicago, 1996 and an MFA from Yale University, 2004.

CAY SOPHIE RABINOWITZ: A recognized art world insider, Cay Sophie Rabinowitz effortlessly develops significant projects and collaborations with museum and corporate institutions alike. Director of OSMOS, a publishing imprint and curatorial project based in New York, Rabinowitz has been Artistic Director of Art Basel (2007 – 2008) and Senior Editor of Parkett (1999 – 2007). Known for her highly professional yet deeply personal approach, Rabinowitz is a fierce advocate and one of the most respected assets in the art world. Cay Sophie Rabinowitz launched OSMOS Magazine as a journal of texts and image series created by practitioners and professionals investigating the uses and abuses of photography.  Rabinowitz is a well-respected art world insider known for producing outstanding quality and being a liaison to facilitate opportunities and partnerships. OSMOS activities are predominantly : Exhibitions, Education, Estates, and Publications, including OSMOS Magazine issues 1 to 21, 10 monographs with artists since 2013  and osmos.online.

Cay Sophie Rabinowitz has also been Manager of The Darrell Ellis Estate and The Estate of Gretchen Bender. Ellis was a gifted New York-based black artist  who worked in photography, drawing, and painting until his life was cut short at the age of 33 by AIDS. Darrel Ellis’s work gained national attention when it was seen in the landmark exhibition, Witnesses: Against Our Vanishing, curated by Nan Goldin in 1989 at Artists Space. Witnesses became a rallying cry against censorship when the NEA withdrew funding because of a catalogue essay by David Wojnarowicz. Gretchen Bender was an American artist who worked in film, video, and photography and was part of the so-called 1980s Pictures Generation of artists. Cay Sophie Rabinowitz will also be representing the Estate of Bev Grant, activist and photographer, with whom she has been working since 2018.