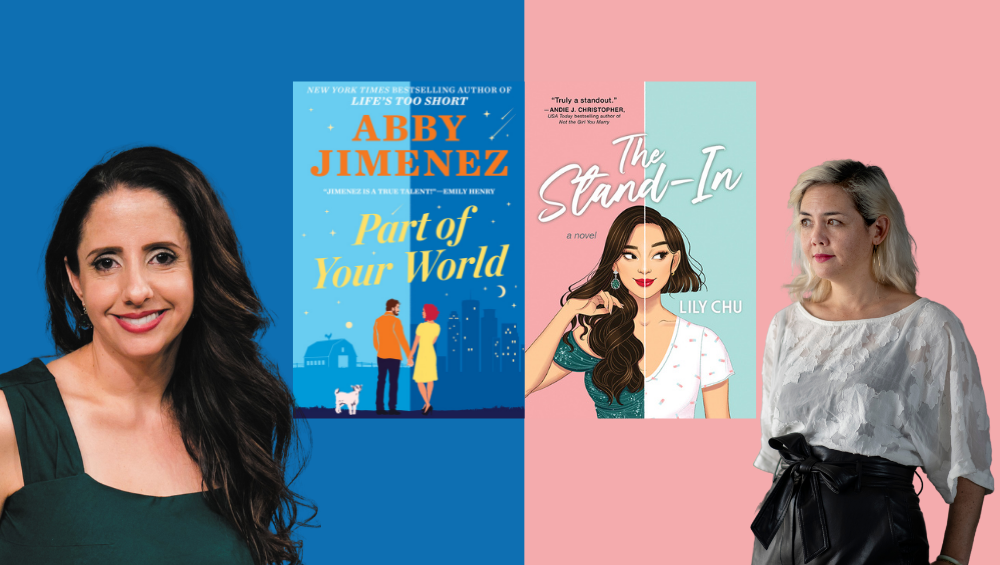 In-Person | An Afternoon with Abby Jimenez and Lily Chu

An Afternoon with Abby Jimenez and Lily Chu

Part of Your World

Part of Your World 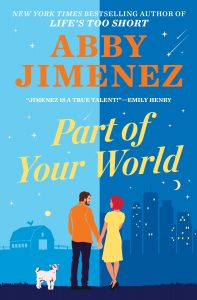 After a wild bet, gourmet grilled-cheese sandwich, and cuddle with a baby goat, Alexis Montgomery has had her world turned upside down. The cause: Daniel Grant, a ridiculously hot carpenter who’s ten years younger than her and as casual as they come—the complete opposite of sophisticated city-girl Alexis. And yet their chemistry is undeniable.

While her ultra-wealthy parents want her to carry on the family legacy of world-renowned surgeons, Alexis doesn’t need glory or fame. She’s fine with being a “mere” ER doctor. And every minute she spends with Daniel and the tight-knit town where he lives, she’s discovering just what’s really important. Yet letting their relationship become anything more than a short-term fling would mean turning her back on her family and giving up the opportunity to help thousands of people.

Bringing Daniel into her world is impossible, and yet she can’t just give up the joy she’s found with him either. With so many differences between them, how can Alexis possibly choose between her world and his? 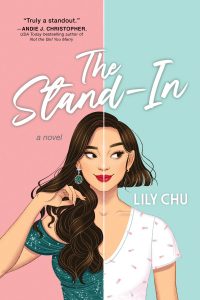 HOW TO UPEND YOUR LIFE:

Gracie Reed is doing just fine. Sure, she was fired by her overly “friendly” boss, and yes she still hasn’t gotten her mother into the nursing home of their dreams, but she’s healthy, she’s (somewhat) happy, and she’s (mostly) holding it all together.

But when a mysterious SUV pulls up beside her, revealing Chinese cinema’s golden couple Wei Fangli and Sam Yao, Gracie’s world is turned on its head. The famous actress has a proposition: due to their uncanny resemblance, Fangli wants Gracie to be her stand-in. The catch? Gracie will have to be escorted by Sam, the most attractive—and infuriating—man Gracie’s ever met.

If it means getting the money she needs for her mother, Gracie’s in. Soon Gracie moves into a world of luxury she never knew existed. But resisting Sam, and playing the role of an elegant movie star, proves more difficult than she ever imagined—especially when she learns the real reason Fangli so desperately needs her help. In the end all the lists in the world won’t be able to help Gracie keep up this elaborate ruse without losing herself…and her heart.

ABBY JIMENEZ is a Food Network winner and New York Times bestselling author. She founded Nadia Cakes out of her home kitchen back in 2007. The bakery has since gone on to win numerous Food Network competitions and has amassed an international cult following. Abby’s wry literary wit was spotlighted as the admin behind the hilarious viral comments on the now-famous Nadia Cakes Vageode ® cake.

Abby loves a good romance, coffee, doglets, and not leaving the house.

LILY CHU loves ordering the second-cheapest wine, wearing perfume all the time, and staying up far too late reading a good book. She writes uplit fiction set in Toronto with strong Asian characters.