In-Person: An Evening Celebrating the Release of Radical Conventions

AN EVENING CELEBRATING THE RELEASE

Books & Books is excited to present an evening celebrating the launch/release of “Radical Conventions: Cuban American Art from the 1980s”, the accompanying publication to the exhibition by the same name presented at the University of Miami Lowe Art Museum in collaboration with the Cuban Heritage Collection at the University of Miami Libraries on view from March 12 – June 17, 2022, curated by Elizabeth Cerejido and Assistant Curator Ana Clara Silva. This will be an evening to meet the curator, artists, lenders and others who made this project possible. Radical Conventions with essays by Elizabeth Cerejido, Chon Noriega and Gean Moreno is the first publication of its kind to be released by the Cuban Heritage Collection and the exhibition marked the first collaboration of its kind between the Lowe and the Collection. If you love Cuban art (and who doesn’t?) you won’t want to miss this!

“Radical Conventions: Cuban American Art from the 1980s” was published as the companion catalogue for an eponymous museum exhibition (University of Miami/Lowe Art Museum, Coral Gables, FL, March 17 – June 12, 2022); the first such show to focus solely on the artistic production of artists of Cuban descent active in the US in the 1980s. Featuring scholarly essays by Elizabeth Cerejido, PhD (Esperanza Bravo de Varona Chair, Cuban Heritage Collection, University of Miami Libraries); Chon Noriega (Distinguished Professor of Film, Television, and Digital Media, UCLA); and Gean Moreno (Director of the Knight Foundation Art + Research Center, ICA Miami), “Radical Conventions” examines a pivotal moment in contemporary American art history. Unlike other texts examining Cuban Art from the diaspora, this book moves beyond the reductive lenses of exile, displacement and provides, instead, a counter-narrative to the prevailing discourse on Cuban American art and locates the cultural formation and artistic practice of its featured artists in nuanced social and political contexts. By dispensing with the more typical binary-identity focused approach, the works reveal the impact of other identities. Beyond biculturalism, issues related to sexuality, gender, religion, class, and political positionings—especially vis-à-vis Cuba and Cuba/US relations—are addressed within the wider aesthetic frameworks of the American avant-garde of the late 1970s and 1980s. Radical Conventions also places the works on view in dialogue with the most pressing issues of this pivotal decade: HIV/AIDS, identity politics, culture wars, postmodernism, Mariel, and Reagan-era conservatism.  Although these practitioners worked largely within the conventional parameters of contemporary art, their radicality resides in the culturally specific ways in which they engaged with artistic norms, often broadening and challenging pictorial and conceptual frameworks associated with painting, drawing, photography, video, and performance art. 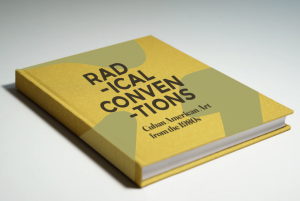 ELIZABETH CEREJIDO, PhD , curator, art historian, and administrator whose professional and academic work has focused on modern and contemporary Latin American and Latinx art, with a specialization in the visual arts and cultural politics of Cuba and its diaspora. She served as curator for the Patricia and Phillip Frost Art Museum at Florida International University and later as Assistant Curator of Latin American and Latino Art at the Museum of Fine Arts in Houston. She has contributed to numerous exhibition catalogues and publications, including Museum as Battleground: Exile and Contested Cultural Representation in Miami’s Cuban Museum (2018). In 2014, Cerejido received a Knight Foundation Arts Challenge grant for “Dialogues in Cuban Art,” which brought together Cuban and Cuban-American artists and curators through cultural exchanges and symposia in both Miami and Havana. In 2018, Dr. Cerejido was named Esperanza Bravo de Varona Chair of the Cuban Heritage Collection at the University of Miami Libraries.

CHON NORIEGA is Distinguished Professor of Film, Television, and Digital Media at UCLA. He is author of Shot in America: Television, the State, and the Rise of Chicano Cinema (2000) and co-author of Phantom Sightings: Art After the Chicano Movement (2008) and Home—So Different, So Appealing (2017). He is editor of A Ver: Revisioning Art History, a book series on Latinx artists. In addition to research, he is active in archival preservation and contributes regularly to museum exhibitions. Noriega was a Guggenheim Fellow in 2021-22 and is currently completing a book on Destructivist artist Raphael Montañez Ortiz (b. 1934).

GEAN MORENO is Director of the Knight Foundation Art + Research Center at ICA Miami and a member of the institution’s curatorial team. He has organized exhibitions dedicated to the work of Hélio Oiticica, Terry Adkins, Larry Bell, Ettore Sottsass, and others. Moreno is also co-director of [NAME] Publications and the “Migrant Archives” initiative. He has contributed texts to various catalogues and publications, including e-flux journal, Kaleidoscope, and Art in America. He was on the Advisory Board of the 2017 Whitney Biennial and the 2018 Creative Time Summit. He edited Real Abstraction and Contemporary Art, an anthology that Verso Books released in 2019.