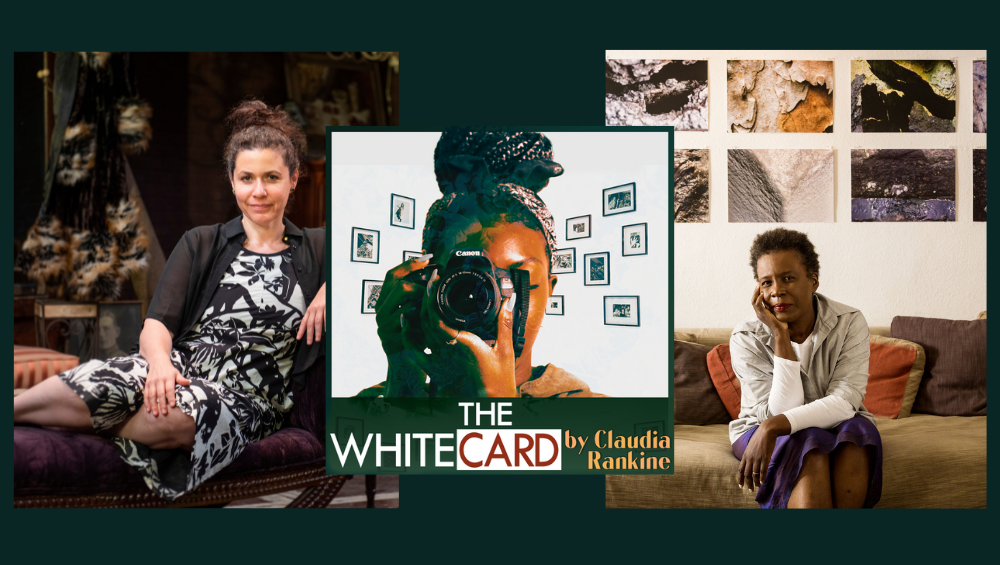 The White Card will be playing at GableStage Feb. 27 – March 27. Follow the link HERE for more information on tickets. 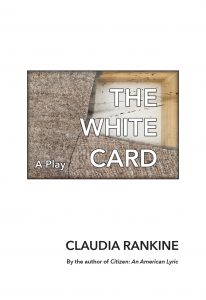 A play about the imagined fault line between black and white lives by Claudia Rankine, the author of Citizen

The White Card stages a conversation that is both informed and derailed by the black/white American drama. The scenes in this one-act play, for all the characters’ disagreements, stalemates, and seeming impasses, explore what happens if one is willing to stay in the room when it is painful to bear the pressure to listen and the obligation to respond.
—from the introduction by Claudia Rankine

Composed of two scenes, the play opens with a dinner party thrown by Virginia and Charles, an influential Manhattan couple, for the up-and-coming artist Charlotte. Their conversation about art and representations of race spirals toward the devastation of Virginia and Charles’s intentions. One year later, the second scene brings Charlotte and Charles into the artist’s studio, and their confrontation raises both the stakes and the questions of what—and who—is actually on display.

Rankine’s The White Card is a moving and revelatory distillation of racial divisions as experienced in the white spaces of the living room, the art gallery, the theater, and the imagination itself.

CLAUDIA RANKINE is the author of five books of poetry, including Citizen: An American Lyric and Don’t Let Me Be Lonely; three plays including HELP, which premiered in March 2020 (The Shed, NYC), and The White Card, which premiered in February 2018 (ArtsEmerson/ American Repertory Theater) and was published by Graywolf Press in 2019; as well as numerous video collaborations. Her recent collection of essays, Just Us: An American Conversation, was published by Graywolf Press in 2020. She is also the co-editor of several anthologies including The Racial Imaginary: Writers on Race in the Life of the Mind. In 2016, Rankine co-founded The Racial Imaginary Institute (TRII). Among her numerous awards and honors, Rankine is the recipient of the Bobbitt National Prize for Poetry, the Poets & Writers’ Jackson Poetry Prize, and fellowships from the Guggenheim Foundation, the Lannan Foundation, the MacArthur Foundation, United States Artists, and the National Endowment of the Arts. A former Chancellor of the Academy of American Poets, Claudia Rankine will join the NYU Creative Writing Program in Fall 2021. She lives in New Haven, CT.

BARI NEWPORT joined GableStage as producing artistic director in April 2021. She came to Miami from the Penobscot Theatre Company in Bangor, Maine, where she served as artistic director for nine seasons. Previously, she was artistic associate at the Alliance Theatre in Atlanta, artistic associate/literary manager at the Pasadena Playhouse, associate producer at Horizon Theatre and associate director of Florida Repertory Theatre. As a producer, Newport has been responsible for the creation and stabilization of a wide range of artistic initiatives, including extensive work in new play development, education and community engagement. While leading Penobscot—which serves 40,000 people each season—Newport doubled the budget in eight years, produced five world premieres, created a partnership with the Penobscot (Native American) Nation, with whom she developed two large-scale NEA-supported projects, and fully funded the company’s first endowment. She kept her entire staff of 15 employed during the pandemic and produced an innovative season that included 17 newly commissioned, digital projects. Her work as a director and actor has been seen at Horizon Theatre Company, Greenbrier Valley Theatre, American Stage, Cumberland County Playhouse, Florida Repertory Theatre, Sacramento Theatre Company, Westport Country Playhouse and the Williamstown Theatre Festival.